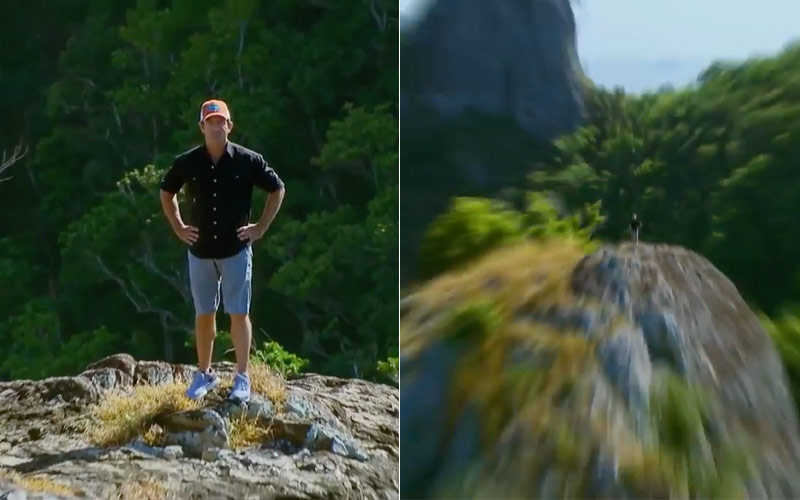 Jeff Probst atop a rock during the Survivor Ghost Island opening sequence, in screenshots taken from the first episode. On the right, the zoomed-out version.

Hi Andy. I just watched the first Survivor Ghost Island episode and I was wondering how they film Jeff on the top of the rock at the beginning of the season? They’ve put him in some pretty scary places over the years. Just curious how they film the opening. Thanks. —Diane

While I haven’t seen any reporting about this particular season’s opening, Survivor has done similar cold opens before, and Probst has talked about them and I’ve written two stories about them over the years.

The short answer is that, like everything on Survivor, there’s a lot of planning, thought, talent, and hard work goes into producing even the briefest of television moments. It’s a high-quality show, from the Tribal Council designs to the opening sequence.

For Survivor Caramoan, Probst was also standing on top of a tall rock, and was dropped off there by helicopter. A crew member climbed the rock and secured a safety line, to which Probst was attached.

CBS produced a video that showed him being dropped off and picked up, and you can watch that footage here.

As I wrote in 2013 after watching that, “Jeff Probst is a fucking bad ass host who’s completely in his own league.”

Probst also filmed a behind-the-scenes video about the filming of Survivor Gabon opening sequence, which was filmed a five-hour flight away from base camp and took more than a day to produce, including rehearsals.

It’s a really fascinating look into the process. Watch that video here.

Do you know the date of the Survivor Ghost Island finale? —Nick W.

We do now: It’s May 23, when Survivor will have its usual two-hour finale and one-hour-ish reunion.

CBS confirmed that date in late March, but in general, the finale date is predictable, since the show now airs a standard 14 episodes, including the two-hour finale.

The variable in Survivor’s schedule tends to be the first episode, which this season was two back-to-back episodes, episodes 1 and 2. Had it aired just one episode that day—for example, a 90-minute episode one—the finale would have been a week later.

Why do Survivor DVD covers give away the winners?

I have been really enjoying the past few seasons of Survivor. I probably got into it again for the first time since season one around the time when Coach and Tyson first made their appearance on the show and was instantly hooked and have watched every season since. But, there were quite a few seasons I missed out on in between season one and then and I’ve been trying to catch up on them any way that I could. Now, I understand that the first and overwhelming response to my problem is that I shouldn’t have let myself fall all of these years behind, and that I understand. But, any idea why the Survivor DVDs would feature the winner prominently front and center on the cover?

I tried to scour your archives for a possible thread on this and couldn’t find one. I was just wondering if you had any thoughts on this, I understand that for fans of the show who just want to rewatch that seeing the winner wouldn’t be an issue, but for those who haven’t it’s a total ball buster. I went on Amazon over the weekend to look into any DVDs that I could order for a good price and marathon, and found the Exile Island season for $6.49 brand new. I ordered it, but I couldn’t divert my eyes without seeing that this is the season that Aras originally won thanks to the stupid cover art. So, while I will watch it and enjoy seeing how the game was played back then and get to know some new (old) faces, knowing the outcome really really sucks the fun out of watching.

Any thoughts on this? Am I just the idiot who shouldn’t have let myself fall behind for all those years? They could have put anything on those covers and I don’t think it would have detracted buyers; the whole cast, a nice shot of the location. WHY feature the winner?! I feel like I can never watch those old seasons now without knowing beforehand who the winner is and it’s really disheartening. Thanks for your time man, hope to hear back from you. Keep up the good work too, love your commentary on the current season! —Kory P.

First, an apology to Kory, who wrote this question in 2013, when Survivor Blood vs. Water was airing. As I mentioned earlier this year, I have quite a backlog of Ask Andy questions, and most of those are because I’ve tried to find answers and can’t find one, or just don’t know. This is one of the oldest!

I certainly don’t think you’re an idiot for going back to watch great television that you missed, Kory, and I think it’s a reasonable expectation to ask the cover art to not give away the results of a competition.

However, I didn’t actually notice this until you pointed it out—though now I can’t unsee it!

The box art always shows six cast members, and the winner is always above the logo, in the center of the top row. There is one exception, as commenters noticed, but that’s continued for all of the seasons that followed since Kory asked this question. (Just scroll through the list of Survivor DVDs on Amazon to see this.)

The only explanations I can come up with is that whoever is in charge of marketing these DVDs 1) didn’t think people would notice, or 2) was convinced the audience for them are people who’ve already watched, but now want to own the season, and putting the winner front and center is a kind of selling point.

If anyone has any better theories or actual reasons, I welcome them, in the comments or privately. And Kory, let us know how the rewatch has gone! I’m glad you rediscovered Survivor.