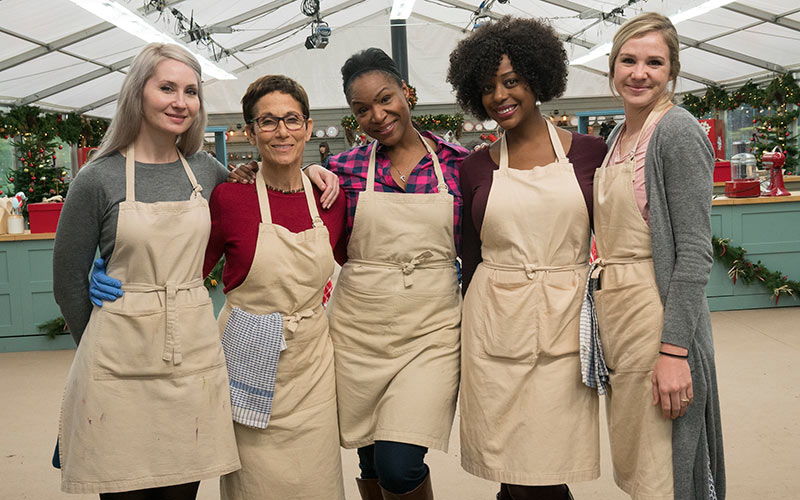 Was the winner of the Great American Baking show ever announced by ABC after it was taken off the air early and we never saw all the episodes due to the sexual harassment accusation against Johnny? What a pity to deprive the viewers of seeing the actual show! —Karen

Yes: The winner was announced via a Facebook post on Dec. 21, the day the finale would have aired.

The winner was Vallery Lomas, an attorney who publishes Foodie in New York, and who’s now working on a cookbook. She defeated Cindy Maliniak and Molly Brodak, the other two finalists.

ABC produced a video that summarized Vallery’s time on the show and her bakes, which you can watch below.

Only Paul Hollywood comments on her bakes, though Johnny Iuzzini is still visible in some shots. The same is true of these videos, which ABC also released to summarize the three other unaired episodes:

Vallery has given several interviews, but it’s this interview with Madamnoire in which she gives the most detailed response to a question about the cancellation.

Vallery said the production company called her to let her know that the rest of the show wouldn’t air, and explains her response to it:

“I think at first it was shock and just disbelief. I couldn’t believe that it was happening. And then it quickly turned into feelings of anger. And since then, it’s alternated between. It’s weird because I’m not the type of person who typically gets angry. I get sad. And obviously, just feeling it was unfair. And that’s kind of a silly word to use because we all know that life’s not fair. But this really, it felt unfair. It’s a weird time we’re in because, you know, obviously there’s a spotlight right now on sexual harassment. As a woman, and a Black woman being in Harlem, I experience sexual harassment. Walking to the subway, sometimes I feel like it’s like little land mines that can blow up anywhere with the comments. Some people even touch you and it’s really awful. I did read the allegations, and of course, I recognize sexual harassment is an issue and it’s something that we absolutely have to deal with. That being said, there’s a lot of collateral damage with the way that sometimes these situations are dealt with. Obviously we have to respect the victims. Especially in the case like this show where it’s a lot of women competing. There were a lot of women in the crew, and we’ve all faced our share of harassment as well. So, it’s unfortunate that we are kind of bearing the brunt of that punishment as well.”

While ABC pulled the show—it did not, oddly enough, pull one of the shows that replaced it, The Great Christmas Light Fight, whose judge Carter Oosterhouse was accused of sexual assault.

Carter is now back on Trading Spaces, and his boss at TLC said they “did look into the allegations” and she is now “comfortable” with him being on the show.

What happened to Last Comic Standing?

Did NBC cancel Last Comic Standing? Roseanne Barr [is] filming her revival show Roseanne [and] probably won’t be a judge if it returns. —Richard

I answered a version of this question two years ago, in 2016, when it had been off the air just one year, and NBC told me that it wasn’t cancelled, just not on the schedule.

Two years later, the same seems to be true: There are no active plans to bring it back, and it is not on NBC’s summer schedule, which instead has shows like Amy Poehler and Nick Offerman’s crafting competition.

The show has been twice cancelled before and resurrected, so that may happen again, it’s just not happening any time soon.

Have a question about reality TV? Send it in!