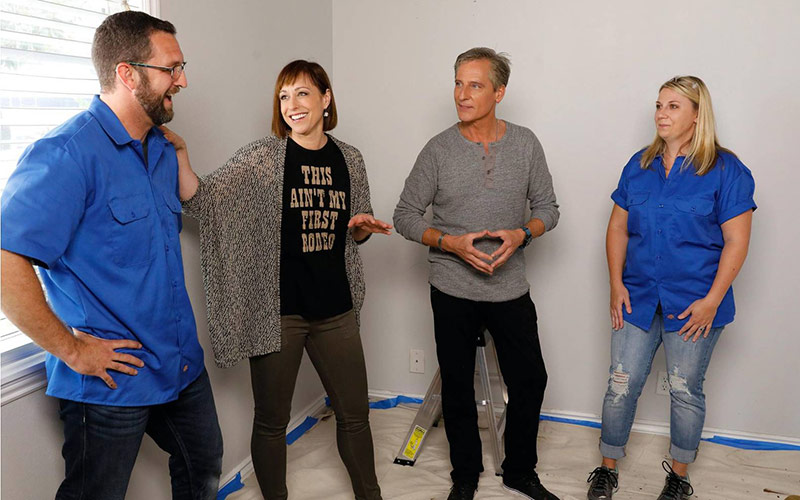 I really enjoyed Saturday’s return of Trading Spaces, which kept the spirit of the original.

But I was curious to know more about it, especially those parts that changed, so I asked Doug Wilson, one of the premiere episode’s two designers, for his insight. Highlights from that conversation are below.

Some reaction to the show, in the media and from viewers, has been critical of how similar the show was to its original version. That was the goal of the cast, crew, and network. “We did Trading Spaces intentionally to be a bit of a throwback. Not reinvent it, bring it back the way it was,” Doug told me.

“We’re tired of the drama of the Kardashians and those situations—and you can quote me on that,” he added. “Enough! Let’s get back to who we, as American families, are, and what we’re doing.”

Referring to shows that showcase lavish homes and expensive designs, he said, “there’s a lot to be said for aspiration. [But] it’s so unobtainable. Our aspirational thing is livable, doable, economical—that’s what we’re trying to bring back.”

What the designers know before the show

During the original series, Doug said, designers would receive a FedExed package of materials, including “a VHS tape of a homeowner interview” and “a packet of written information,” including “pictures of the house and a floor plan,” though those “varied in quality.”

Doug said he preferred the “time when we stepped up the game and we didn’t know which room we were going to have,” because “I want to go by the seat of my pants.” That would mean seeing the room for the first time “the day before we actually started filming—shop it, design it, and get it ready. That was the greatest challenge It was raw and it made you go out into the local area and utilize things that were at hand, just like a homeowner would,” he said.

He tries to do that now, too. “I don’t completely create my room and ship it and have it completely done,” he said, perhaps referencing other designers who may just do that.

What kind of guidance the homeowners provided

In his first on-camera meeting with the homeowners he worked with, Doug referenced notes they’d sent about what they wanted to do with the room. “Sometimes we get that information and sometimes we don’t,” Doug said, adding that it can be “very vague and uninspiring.” That’s understandable, he added, because they’re non-designers, “even though they’re savvier than they were” back when the show was first airing.

What’s most helpful is feedback about “how they really want to help out their neighbors, not just how they want to give [their neighbors] what they’re asking for,” he said. That allows the designers to “try to devise something that we feel might be interesting—and that’s where the jeopardy of the show” comes from.

The designers knew that was coming; Doug said the network thought it would be a “fun challenge for the designer.” But he wasn’t a fan: “We’ve got enough challenges to pull this room off; I don’t need another one.”

“I was very hesitant about it, because when the homeowners went out to pick that product, they don’t know the full concept of the room. They may not be able to make the most educated decision—they’ve only got bits and pieces,” Doug told me.

While it worked out perfectly well in the first episode, he teased that may not always be the case.

Working in a tiny room

I pointed out that the bedroom he redesigned seemed very small, and the space plan ended up not changing at all: a bed and a dresser were in the same place they were before.

Doug said that the original Trading Spaces had the goal of doing 12 foot by 12 foot rooms, which was “very doable with camera people,” equipment, and the homeowners all in the room. But “when you start to squish that down to 9×10, it becomes very difficult.”

That’s about the size of his episode-one room, which had little “flexibility because you’ve got smaller furniture, a king-sized bed, one place to put it—unless you put it on the ceiling like Hildi!” he joked.

The relative tameness of his design

I told Doug what I wrote in my recap: His design seemed pretty in the middle, compared to things he created in the past. “You know me: I can do ‘A Pretty Room By Doug’, or I can do ‘A Prison of Love,'” he acknowledged.

“Did I intentionally not create out-of-the-box for the opening episode, a ‘Prison of Love’? I didn’t want the opening episode to be so shocking so people would be like, What the hell is this show about? My old viewers would understand it, but we’ve got another generation of people we need to latch onto this show.”

Besides new viewers, there was another consideration: “No matter what people think, I try to take the best interest of the homeowners” and create something that’s “completely livable, completely approachable,” he said.

The burlap, incidentally, came first as an idea about how to transform the space—and then Doug realized it’d be a callback to his very first episode. “I brought the burlap only because I thought it would work,” he said.

Adding, not subtracting, a ceiling fan

The original Trading Spaces was known for removing ceiling fans; Doug had his homeowners add one.

“There’s a right place for a ceiling fan,” he said. Even Doug has fans: friends and people visiting his East Hampton home saw his three fans and were surprised. “But they’re all white but they disappear into the ceiling,” he said. “They’re not hanging down five feet. It needs to blend in.”

What was cut from episode one

“There was a wonderful scene that I shot with the homeowners in Sewing World,” he said, referring to the space designated for working with fabrics. “Those scenes are very boring generally, but my scene—because we had the anxiety of the burlap and the chocolate ceiling—I threw out all of the fabrics and everything and was able to explain the full concept. A light bulb went off [in the homeowners]—Oh my god, I get it now!”

Why the show doesn’t have takeaways and how-tos

One critique I’ve seen several times over the past few days is that the show lacked how-to explanation. Doug has heard the same criticism.

“Trading Spaces is not a how-to show. It is an inspirational show, it is a show that will show you ideas and different things from all kinds of different designers who reinvent themselves time and again—well, some of us. That stuff you get online; you go to Pinterest. We’re entertainment. We’re design/entertainment.”