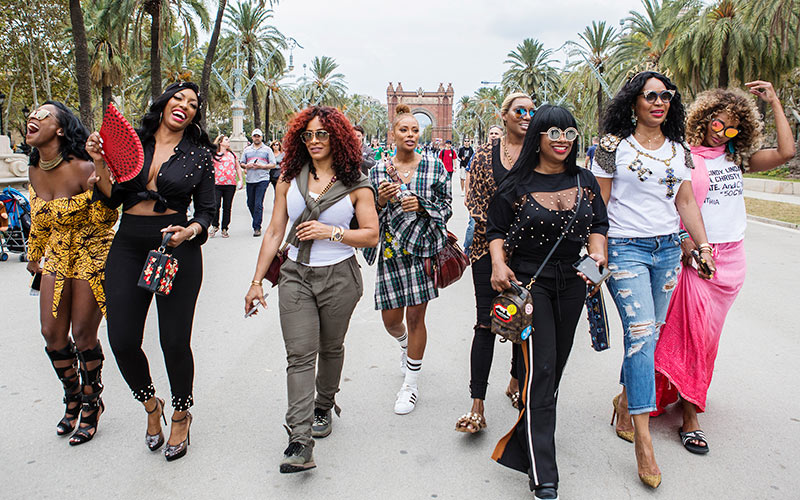 Bravo announced the renewal of five Real Housewives and eight other reality series on Wednesday, and also said that it plans to air original shows seven nights a week this fall. Another 10 brand-new shows, including one starring two of the original Queer Eye Fab Five, were also announced.

It also bragged about Bravo’s success with reality TV:

Here are the Real Housewives franchises that were renewed:

Top Chef was previously renewed and is filming in Kentucky. It was mentioned in Bravo’s announcement along with Southern Charm, which just debuted a new season, and Below Deck Mediterranean, which debuts a new season in May.

Not mentioned at all: Bethenny and Fredrik and Relative Success with Tabatha, which recently ended their first seasons, or Your Husband Is Cheating On Us, which just debuted its first season.

Two series focus on Mexico: one is set in Mexico City, and the other is a Real Housewives-style series featuring people of Mexican descent living in San Antonio, Texas.

Several of them move Bravo closer to HGTV territory, with a backyard redesign show and another where couples have new houses purchased for them.

Here are those 10 shows and their descriptions, all of which come from Bravo’s press release:

Carson Kressley and Thom Filicia are here to help fight the uniformity and ubiquity of American home design. In this new series, Thom takes Carson under his wing to teach him interior design by channeling Carson’s impeccable sense for fashion. The formidable duo will create breathtaking and affordable home re-designs for their lucky clients using expert skills mixed with their signature endearing charm fans fell in love with during “Queer Eye for the Straight Guy.”

Mexico City is the modern cultural mecca of Latin America, and is home to some of the planet’s richest elite. This series will put a spotlight on the notoriously private, high society world in Mexico City by focusing on three family dynasties that made their fortunes in the entertainment, beverage, and luxury car company industries. This docuseries will explore these successful multigenerational families through both comedy and heart in ways that only close-knit relatives can, particularly those that have known one another for decades. They will challenge stereotypes and showcase the revealing, luxurious and over the top lifestyles in this cosmopolitan destination.

This docuseries follows a tight knit group of women and their families living in San Antonio, Texas, who are affluent, sophisticated U.S. citizens or recently naturalized citizens of Mexican decent.  In their upscale and beautiful gated communities, these women will face a new set of challenges in adapting to US culture while working to keep their roots alive and well.

Produced by Freemantle North America and developed by Purveyors of Pop with Matt Anderson and Nate Green serving as executive producers.

This new series expands the fan-favorite “Married to Medicine” to the West Coast. In the city of glitz and glam, these doctors save lives by day and walk red carpets at night. The docuseries features a group of friends living, working and playing in this exclusive medical community, and with Hollywood at their fingertips, these ladies never truly know who’s real and what’s fake.

In a real litmus test for our divided country, a diverse group of people from America’s biggest cities have agreed to pick up and move to the heartland of Waverly, Kansas, where they’ll live and work alongside some very traditional locals.  During this clash of American cultures, will preconceived notions be turned upside down?  Are we too divided or are we all more like-minded than we think? The town’s response to these fish-out-of-water city slickers is often hilarious and quite surprising.

Catch a rare glimpse into the secret second life of young, elite professionals in “Unanchored,” a brand-new docuseries that follows a group of best friends as they embark on their next travel adventure – an exclusive floating festival in the Bahamas where they’ll join 30 yachts. The group leaves behind their high-level careers to travel the breathtaking Bahamas and embrace a subculture of elaborate costumes, eccentric rules, and hallowed traditions. “Unanchored” is a story about finding your tribe—and all the laughter, heartbreak, and adventure that comes with it.

Manscapersis New York City’s most exclusive exterior design and landscaping firm, specializing in full outdoor renovation design for the area’s most demanding clients.  From rooftops in Manhattan to backyards in the burbs, this series follows James DeSantis, Garrett Magee, and Melissa Brasier as they transform barren outdoor spaces into lush, jaw-dropping oases.  These “Two Wills and a Grace” are put to the test as they juggle tight deadlines, multiple clients and each other.

This series will follow different couples that can’t decide, or can’t agree, on what kind of home to buy. At a breaking point, they decide to take a radical step and blindly hand the decision – and their entire budget – over to a team of three industry experts who will be charged with making the choice for these couples.  The expert team will choose the property for the buyer, who will not get to view the property prior to purchase, and then be challenged to take the house through a stunning renovation. Will the experts create the buyer’s dream home? Or will the client end up with buyer’s remorse?

After their break up, real life ex-girlfriend/ex-boyfriend Nina Klemm and Michael LeSure launched a house flipping business in Carmel, Indiana (nicknamed “the Beverly Hills of the Midwest”) called “Flipping Exes.” The show will follow their flipping business, Nina’s work as a local realtor of high-end properties, and of course, the unique relationship between Michael, Nina and their staff in a show that seamlessly mixes real estate and comedy.

“Sweet Home” follows Jennifer Welch and her design business as she and her team, Alex, Sarah and Sabah, take on residential and commercial clients all over Oklahoma City. In each hour-long episode, viewers will see a project come together as Jennifer delivers sophisticated designs with the vision, passion, and sharp wit that she is known for, all while living/dealing with her ex-husband Josh as they raise their growing boys. As always, hijinks are in style as gal-pal Angie “Pumps” Sullivan is back for more hilarious fun.