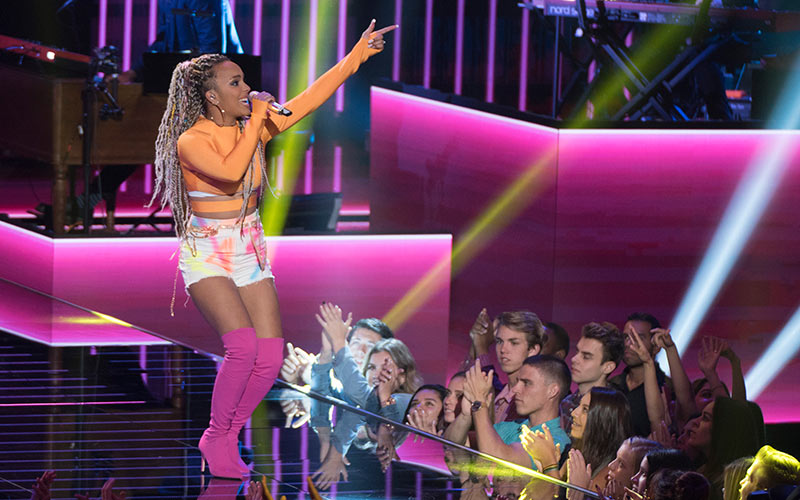 American Idol is in its final month, and after unveiling its top 10 contestants tonight, will switch to a live format for the next three Sundays—eliminating contestants live after they perform.

Those live results are possible because the show will air live in all four U.S. time zones and thus both coasts, starting at 8 p.m. ET on the east coast and 5 p.m. PT on the west coast.

ABC said in its announcement that this is “the first time in the history of American television” that  “a reality-competition series will allow viewers to watch and vote from both coasts simultaneously.”

There have been previous shows that have allowed west coast viewers to vote live, even though they weren’t watching, or allowed their votes to affect the outcome. In fact, ABC’s 2014 show Rising Star did the latter: It was simulcast across three time zones and eliminated contestants live, but west coast votes were tabulated and saved some eliminated singers.

Last night’s top 14 performance episode—which featured a lot of nerves and some considerable technical issues with the sound mix, which seemed to prioritize the band and not the singers—was not live. Tonight’s episode is, and six contestants will advance based on viewer votes from last night, while the judges will choose the other four finalists.

The top 10 will perform next Sunday during the first two-hour live episode. (Those episodes will air April 29, May 6, and May 13.) Idol will split its performance and results across a two-night finale May 20 and 21, with the Monday finale following the Dancing with the Stars: Athletes finale.

Episode by episode, American Idol is introducing changes that make it a better show than it was on Fox, and this is the latest significant change.

I’ve been consistently and pleasantly surprised by how watchable this season has been, and how the producers and ABC are making decisions that have retained the core of the show but also made it far less of a punishing viewing experience. It’s actually enjoyable to watch!

It’s been improved by everything from the incredible duet episodes to the new set, which made its first appearance last night and is far more intimate and modern than previous Idol stages.

And that there’s just one month left is such a delightful surprise. This relatively abbreviated run has made this season feel fast, which is so much better than a season that drags—and I truly hope ABC doesn’t expand Idol for next season. (Based on the ratings and reception, I don’t doubt there will be a next season.)

At its best, American Idol prioritized the contestants over the judges, and this season is doing that while also prioritizing viewers.