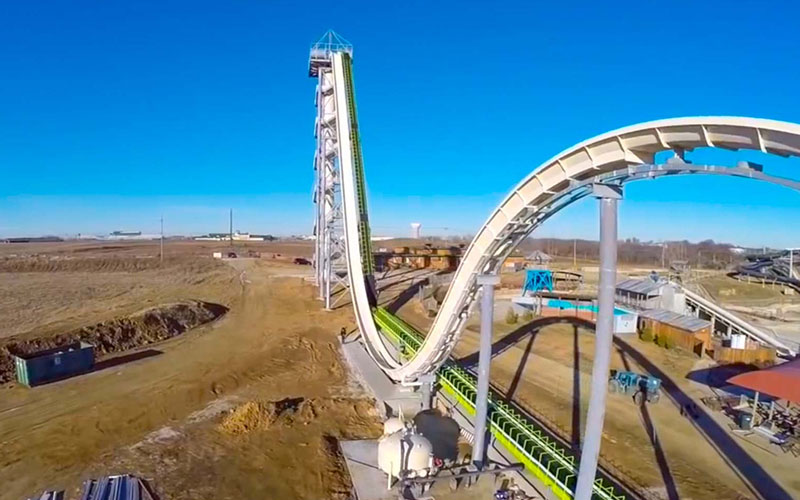 An image of Verrückt under construction at Kansas City's Schlitterbahn, from the slide's web site in 2014.

10-year-old Caleb Schwab died Aug. 7, 2016 on the tallest waterslide in the world, Verruückt, after the raft he was riding in became airborne and he was decapitated by metal bars that supported overhead netting. His “death seemed like an isolated accident until whistleblowers from Schlitterbahn revealed that experts who examined the slide found evidence indicating other rafts had gone airborne and collided with the overhead hoops and netting before the fatality,” the Associated Press reported.

And the slide’s poor design and rushed construction—which included installation of nets and metal hoops because rafts were flying off the ride during testing—were in part because the park’s owner was trying to get attention for it and the park on the Travel Channel’s Xtreme Waterparks.

That’s according to an indictment by a grand jury in Wyandotte County, Kansas, which charged Schlitterbahn’s operations manager and the park itself with involuntary manslaughter, aggravated battery, interference with law enforcement, and other crimes.

The indictment says “designers and operators knew that Verruckt posed a substantial and unjustifiable risk of death or severe bodily harm.”

The ride was born because the park’s co-owner, Jeffrey Wayne Henry, wanted it on TV, according to page six of the indictment:

“On November 13, 2012, in a spur-of-the-moment bid to impress producers of the Travel Channel’s Xtreme Waterparks series, HENRY concocted a plan to build the world’s tallest and fastest water slide.”

Evidence of that includes an e-mail message, quoted on page 8 of the indictment, in which Henry wrote, “This is a designed product for TV, absolutely cannot be anything else. Speed is 100% required.”

(Update: Henry was arrested in Texas on Monday.)

A statement from the water park to KSHB says, in part:

“The indictment uses quoted statements from a reality TV show that was scripted for dramatic effect that in no way reflects the design and construction of the ride.”

The ride was poorly designed without any input from actual engineers, according to the indictment, and plagued with problems, including more than 10 injuries.

A special episode of Xtreme Waterparks that aired June 29, 2014, focused on the slide’s construction. It was titled “Building the World’s Tallest” and the network’s description said the episode would “Go behind-the-scenes of the making of the world’s tallest water slide – Schlitterbahn’s Verruckt in Kansas City, KS. At 168-feet, 7 inches, Verruckt is the Guinness World Record holder for the tallest water slide on the planet.”

The slide wasn’t open the day the episode aired, its then third-delay in opening because of problems.