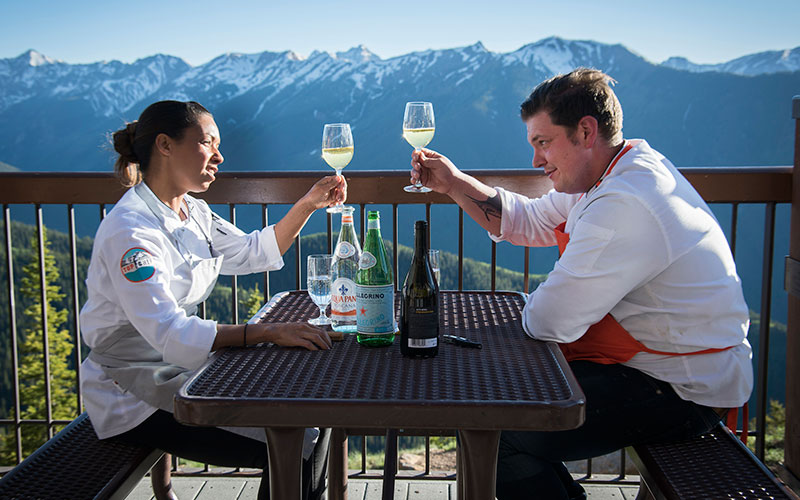 Top Chef Colorado has concluded, and the show is off to its next state, and I have two requests for next season:

Let’s start with #1. This season ended with two strong, likable finalists—Joe Flamm and Adrienne Cheatham—and their final meals were worthy of a finale. Each served at least one dish that the judges raved over and said was the best of the season, and/or was eternally memorable, and/or should immediately be on a menu.

The judges essentially scored the first course to Adrienne and the second to Joe, and then had strengths and weaknesses for each for the final dessert course. Gail Simmons said their decision “has never been more difficult,” and all the guest judges were like ¯\_(ツ)_/¯ glad we’re not deciding!, all of which, in this case, didn’t just seem like reality show finale hyperbole.

So when Padma announced Joe as the winner, it was not clear why he won. What did the judges weight more heavily? What minor error did they think was the most egregious? Did they just flip a coin?

Before the announcement, Tom gave a nice speech about “the better chefs, they go on a journey,” but that did absolutely nothing to help us understand what was to come.

Tom even said, “It’s hard to say there’s only one winner.” But there was and we have no idea why!

The show has had this problem before; four years ago, I had a similar complaint, though in that case I was annoyed at the winner, whereas this season I’d have been happy for either to win. I just want to know why Joe won and why Adrienne lost.

Update, March 12: In an interview with Vulture, Tom gave a succinct explanation as to why Joe won—and this is exactly what I’d appreciate if he said on the actual show:

“We thought the first course went to Adrienne, the next two courses went to Joe, and dessert was neutral. So, that really did it. His beef dish was better and his pasta was better than the octopus. The octopus was good. It was really dry and we all commented on that, and there’s no getting around that. It may have had to do with the charring after it was braised — a lot of things can happen if it were braised and not cooled down in the braising liquid. If it’s roasted, it can dry out. I don’t know what she did, but it was definitely dry. That was really it.”

By the way: During 15 seasons of Top Chef, women have won four times. At least one woman has made it to the finale of 10 of those 14 seasons.

More reality TV shows should do commercials like Top Chef

This season ended on a higher note than it started with, and I’m not talking about the lack of a marijuana challenge in Colorado. There was a mostly likable cast, although the editing hit some character beats far too often (Did you know that Bruce became a dad while he was competing?), and the cooking was so weak Tom Colicchio yelled at them.

But what may stick with me the most are some of the commercials.

At some point early in the season, I stopped fast-forwarding through them because it seemed like the show was continuing in a smaller window on the screen. That’s basically what was happening: a smaller window showed raw footage of a challenge. The progress was slower, of course, but what fascinated me the most were the shots when a camera captured other cameras, and all of the crew required to produce the show.

That kind of glimpse behind-the-scenes is a wonderful reminder of how many craftspeople work on the other side of these tables. And it was just riveting to watch an unedited challenge, to see the chefs scrambling in a different, slower way. After all, challenges are condensed from 20 or 30 or 60 minutes into just a few TV minutes, so we don’t see the vast majority of the cooking the contestants do.

These behind-the-scenes glimpses weren’t new; another NBC Universal network’s show, Smackdown, does it, and so have other shows. It’s beneficial because it keeps people watching ads, and ad rates are actually set based on the number of viewers who watch the commercials.

Sometimes Top Chef’s ad breaks were totally normal, full-screen commercials; other times, the split screen showed basically a second ad, like a Tasty video, and if there’s anything deleting the Facebook app off my phone taught me, it’s that I don’t need any more fucking Tasty videos in my life.

But I hope they stick with the behind-the-scenes content and give us more—and hope that other reality shows follow. It benefits viewers, the network, and those who work behind the scenes, who deserve more attention.