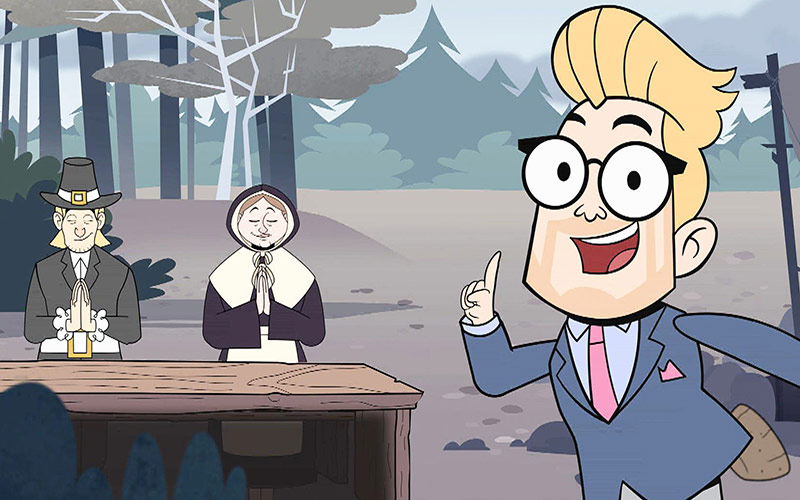 Adam Conover returns to destroy misconceptions and misinformation—but this season, he's animated and focusing on history. (Image by truTV)

That’s the biggest debut this week—and I say that not just because it’s a popular and beloved series, but because it’s actually huge: airing two hours every week. Its 90-minute episodes will be followed by 30-minute Untucked episodes (VH1, Thursdays at 8).

This is season 10 of the competition, and episode one will bring back popular queens from the past even as the show is coming off of its most controversial season. Will it be able to slip back into its ability to celebrate the art of drag and tell its performers’ stories? Or will the show’s move to VH1 continue to change it, as seemed to happen with All Stars 3?

Adam Ruins Everything is the one scripted show I cover regularly, though it ultimately a nonfiction series. That’s because I appreciate its mission so much: to explain and correct our common misunderstandings and to tear down misinformation.

It returns for an entirely animated season, in which Adam tackles myths and misconceptions about history during six “Reanimated History” episodes (truTV, Tuesdays at 10:30).

New this week: Love at First Flight (Lifetime, Tuesdays at 10), a dating show that flies its couples across the country and then asks them whether or not they want to get married.

Finally, the daughter of Death of a Salesman and The Crucible writer Arthur Miller directed a documentary about his life: Arthur Miller: Writer (HBO, tonight, March 19, at 8). Rebecca Miller says she worked on the film for around 25 years, because she “needed some distance.”