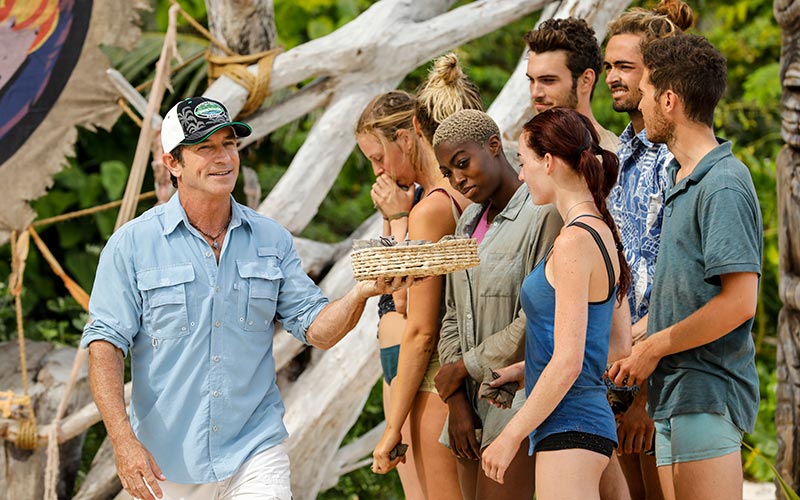 At the sixth Survivor Ghost Island Tribal Council, Jeff Probst said two things about this season’s tribes. First, he called Malolo one of Survivor’s worst tribes ever, as if it’s actually a tribe with an identity and a history instead of just a parking spot for three completely different groups of people.

Later, in one of his questions-as-lectures, he said “it’s just a buff” and that players don’t “bleed” tribe colors. He appeared to be trying to shake the tribe out of its original-tribe loyalty: C’mon! We’ve shuffled the tribes twice. Can’t you give us something more interesting than what would have happened if we’d just left you alone after the first two episodes?

Half of the original Malolo tribe has now been voted out, and another tribe shuffle didn’t change that. This was not a “brand new start,” as Probst said so optimistically when he distributed the new buffs.

The shuffle was from two tribes to three tribes, which gave us smaller tribes, but each magically and coincidentally ended up with two original Malolos and three original Naviti. Will they just be Pagonged until and after the merge?

What’s interesting and somewhat frustrating to me is that we’ve now had two Tribal Councils in a row  that have had two foregone conclusions, but yet the episodes have edited around those decisions. That’s a throwback to early Survivor, yes, but an unnecessary one.

If Jeff Probst is going to fill time at Tribal with talk of heads and hearts in order to dance around the fact that nothing much is happening, why not show us why Angela decided to stick with her original tribe, or why Michael also voted for James, or why James said he was blindsided when that vote seemed like the exact opposite of a blindside?

Survivor seems obsessed with blindsides and now just calls every vote one, even when they’re not. But it’s also called a season Ghost Island even when it’s not actually a significant part of the season—at least not yet.

Jeff Probst says Ghost Island will be part of the game through the end. While I can appreciate not showering the players with advantages and using a twist judiciously, I still can’t get over naming a season Ghost Island and then using it so little it’s getting increasingly comical.

Six episodes and Ghost Island has been used just twice, and only one of those players chose to even try for the advantage—which turned out to be something he had to give away.

Welcome to Survivor Ghost Island. Are you new here?

Although this was technically episode five, since the first episode was really two in one, we’ve now effectively had six episodes. Yet there are still people who seem like they’ve snuck onto the set. People like Chelsea, who scared me by both 1) appearing out of thin air and 2) swirling her spoon around the rim of her coffee cup, an action that I’ll never again think of as innocuous after Get Out.

There were some nice dives into character this episode, and also into tribe dynamics, as the episode spent time at each camp with its new inhabitants, and a few moments of depth with some people: Wendell bonding with Sea-Bass by bringing him a smelly shell; Anglea’s loneliness after her divorce.

Still, the editing just seems proportionally off to me—we’re spending so much time with the same people.

The editing has, for example, found copious amounts of time to mock Chris and Bradley. And wow, did Chris get a brutal edit this week! He walked right into it, of course, first bragging that he was “haivng to develop this bond and that bond” (i.e. he has to play Survivor since he’s on it), attributing that to the fact that he’s “a big athletic guy and charismatic,” which makes everything “exhausting.”

Oh, but that wasn’t all! Chris gave this impossible-not-to-use soundbite:

“I’m hesitant to tell people I model because for some crazy reason, people think that models might be self-absorbed, they might be dumb, just a lot of thing that might not be beneficiary to me.”

The editing didn’t just present his words for us to laugh at, it added sound effects to make sure this was comical—and then ended its Chris-is-vain-cocky-dummy segment with him almost cutting Sea-Bass’ arm with a machete. What did Chris do to the production?

Through all this, though, this episode made me realize how much I just really like everyone on the cast—even those getting villain or dodo edits. Even many of these early exits are people who I’d be glad to see as returnees.

For immunity, the tribes competed in the classic blindfolded-and-banging-into-things challenge, which delivered nonstop excitement: Libby hitting her face, Michael hitting a crate, James hitting a barrel, Chelsea hitting her face, puzzle piece bags dropping on heads, people tied together going over and under a log.

The most interesting was a fight over a bag of puzzle pieces—Donathan and Chelsea had the wrong tribe’s bag and were wrestling for control of it, but had no idea they were wrong despite (or perhaps because) Desiree and Dominick were screaming simultaneously at them.

There was a fun new wrench thrown in to the challenge: two people had to assemble the puzzle while blindfolded. This made the entire challenge largely dependent upon the caller. Desiree did an incredible job of getting her tribe to gather the bags of puzzle pieces and then leading her blindfolded team through the obstacle course, but they lost their significant lead when she just couldn’t talk them through assembling the puzzle.

Had they not been blindfolded, they would have won and saved Malolo from Jeff Probst’s slander, though it’s unlikely this would have saved a Malolo from going home.

I’m burying the lead here: The cast received their bathing suits! That means no more underwear, and no more wet underwear.

This will thrill some viewers, and has brought a tear to the eyes of the rest of us, as now the show is at least 50 percent less stimulating to watch.