Survivor has always been a game told in well-crafted narrative, but in the era of Jeff Probst’s leadership, it’s become especially focused on story—so focused that Probst calls the cast “storytellers.” Really, though, that describes him: He grabs and tries to turn things into story beats as they happen, skipping Donathan’s Marvel origin movie and just declaring him an Avenger because Donathan got off the dock and swam down eight feet.

Personal victories are great, especially for the people who achieve them, but how impressive they seem diminishes with how much attention Probst gives. It almost seems like sarcasm, one adult telling another, Oh good boy! You ate your sammy!

I point this out because I find it interesting how much Probst and company will spend on creating story moments—such as by having an opening challenge that isolates certain individuals so they can get focus/blame at the start of the game—yet miss how challenging it is to follow the story of a week-two tribe swap for those of us who haven’t pre-memorized the entire cast.

The season hasn’t had time or the desire to introduce most of the cast, with only a few of them receiving character-defining attention, yet mixed up the tribes and then dumped us into the middle of the strategizing.

I appreciate that Survivor’s narrative isn’t overly simplified—when another player’s name is mentioned on Big Brother, it frequently, if not always, cuts to a shot of that person to remind viewers who it is—but I also really could have used a chart to assist me during parts of the episode and Tribal Council, to identify new tribes, old tribes, and individual people, particularly those who look similar.

Perhaps it’s just me, but even though I watched all three episodes Wednesday, I felt somewhat lost during episode three. I really enjoyed the two-hour premiere, and felt like I had a good sense of the dynamics and was curious about how they’d play post-Jacob.

There was momentum for the season and was in for the ride. Fiji is as spectacular as always, and more than fine as Survivor’s permanent home, should the show never leave again. (Survivor 37 and 38 are also being filmed there.)

I suppose the swap had the same effect on me as it did on the players: put the brakes on the game they thought they were playing, and forced them to start over. Though their original tribe loyalty seemed intact, with 5 to 4 splits on each team.

The orange tribe won immunity, but that split meant they couldn’t agree on who to send to Ghost Island, so they drew rocks, and that left them a 4 to 4 tribe that could very well have drawn rocks at Tribal Council, too.

Instead, Morgan was voted out, and I’m not quite sure why, especially since it was Domenick who tried to ingratiate himself with the other tribe by revealing he’d created a fake idol—something James immediately knew was just cover for a real idol.

In another weird week-two, episode-three decision, Chris arrived at Ghost Island to discover that Ghost Island wasn’t in play this episode, just like on the second episode last week.

An entire season is built around twists from the past and both the second and third times it’s used there’s nothing there? Nothing?

Its first visitor, Jacob, got a mini-challenge, choosing between two bamboo containers, one of which contained a key (OR WAS THERE A KEY IN BOTH) to unlock an advantage. This was thrilling, especially since Jacob was in such a shitty position—entirely of his own making, but we’ll get to that below—and so the reveal of his advantage had the potential to shift his game.

And then he got: the legacy advantage, something he has to give to someone on the other tribe. So Ghost Island provided absolutely nothing of value to Jacob, or Donathan, or Chris.

Ghost Island, you’re just Exile Island wearing a sheet you got out of the linen closet.

Episodes 1 and 2: The Jacob Digs Himself a Hole Show 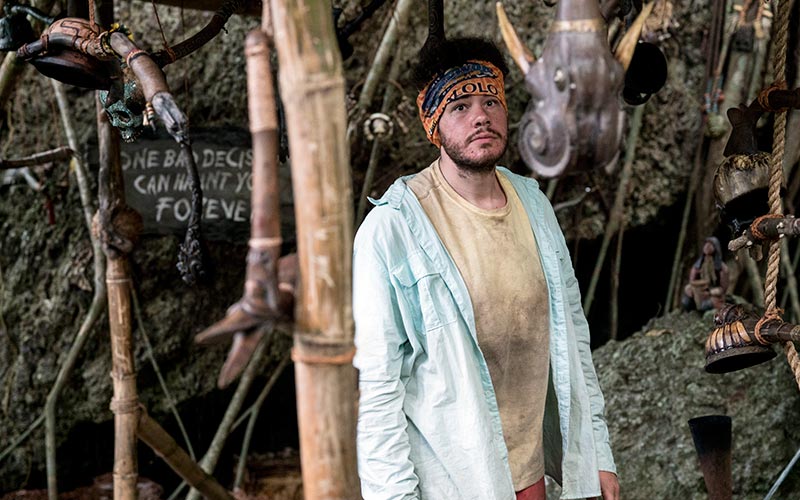 Jacob Derwin was the first to visit Ghost Island, and was voted off at his first Tribal Council. (Photo by Michele Crowe/CBS Entertainment)

The first person to exit Survivor Ghost Island was Gonzalez, but that seemed to be more of a product of easy first-boot Jacob’s absence than her game play. Perhaps she overplayed, especially by trying to make Tribal Council into a whisper-fest, but the rationale for getting rid of her felt thin, or at least not fully established.

The person who really overplayed was Jacob, which was really surprising considering a year ago, he was recapping the show, as he’d been doing for several seasons. He’s a fan not just in name, but has demonstrable evidence of his knowledge of the show and how these things go.

He was admirably honest and vulnerable (“I’m a neurotic paranoid indoor kid”), but for a superfan and Survivor recapper, he really fell into the episode-one rut so dramatically that it was a canyon by the time he was done digging.

He just made a series of puzzling decisions, from dumping his tribe’s limited rice supply into his dirty sock just to search for a clue to his badly constructed lie about what happened on Ghost Island, never mind confessing it to Stephanie, the first person who showed him any game attention.

Interestingly, Jacob said in an exit interview that his “I’m Going to Go Search for a Hidden Immunity Idol Now” moment, which seemed to be a key moment of over-playing, was long after he knew his tribe was targeting him; no one would even talk game.

He was so obviously an easy target for a first vote that when the other tribe won immunity, they sent him to Ghost Island to make his tribe’s first decision far more difficult.

Jacob’s fake idol was, like most of his decisions, a good instinct and terrible execution. (My thought in that moment was that he should tell his tribe everything, but say he chose the wrong bamboo box, so he didn’t get the key or the advantage.) When  Brendan asked to see the note accompanying the idol, Jacob was caught and stumbled through saying he must have left it behind—which of course felt even faker than that idol.

He didn’t play it; he was voted out. It was an easy vote, perhaps one of the easiest ever, but seeing those blunders did make for a solid first episode.

In episode three, after the Tribe Swap, and after hearing his new tribemates’ complaints, Brendan said, “This is Survivor. it’s supposed to be hard. I don’t quite understand why it’s shocking to these people.”

It’s a fair point, but the shock of the game—perhaps also of sleep deprivation, of hunger, of the pressure to perform in front of cameras, or just finally being able to talk after a week of pre-game silence while living with your future competitors—is often what starts the game. Or ends it, as was the case for Jacob.