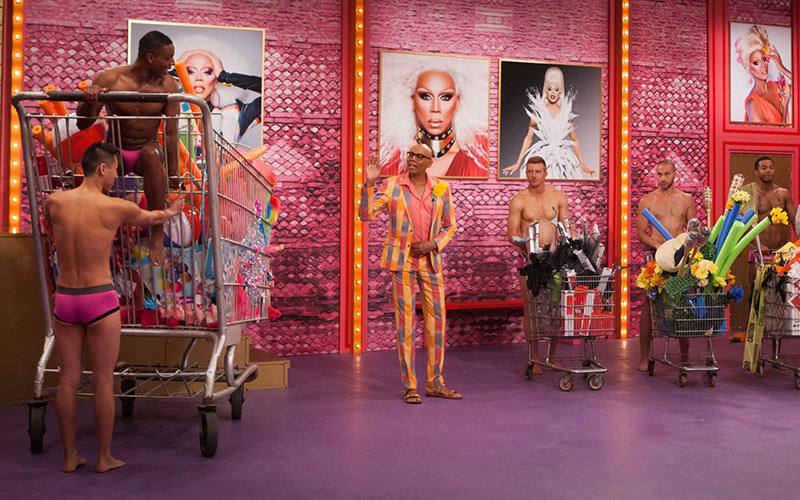 RuPaul introduces the first maxi challenge with the help of the Pit Crew during the season 10 premiere of RuPaul's Drag Race. (Photo by VH1)

Any fear that the move to VH1 had permanently transformed RuPaul’s Drag Race into an uglier version of itself faded almost immediately with the premiere of season 10, which felt like everything great about the show working perfectly, and one of the show’s strongest premieres ever.

“Season 10 ain’t playing,” Eureka said during the mini-challenge, which was a perfectly calibrated way to combine old and new, and celebrate the show’s 10-season history without losing the focus on season 10.

The queens had to walk a runway surrounded by past queens, and they were the stars, not the returning guest queens—and the returnees knew it. “I didn’t mind being slapped across the face—I was happy for the air time,” Jinx Monsoon said.

There’s a great range in this new cast—geography, ages, and, of course, drag styles. Blair out of drag looks so young that Aquaria “thought she was one of the producers’ sons or something,” she said. Some of the queens also have history with each other, and many have connections to past contestants.

The work room set has been upgraded, and there were no twists, no inept production—just some shade thrown the show’s own way as RuPaul pretended to introduce another queen after the runway. Instead, it was guest judge Christina Aguilera.

And just how wonderful to return to the lip sync for your life format. The episode was followed by the new Untucked, which is upgraded a little but still just raw conversation.

I’m in for any episode of reality TV that includes the phrase “space odyssey clown realness”—which is how Dusty Ray Bottoms described her look made from 99 cent store items—but Drag Race was back to its finest form in all of its colorful glory.