Skip to Content
On the left, NASA's Hawaii Space Exploration Analogue and Simulation on the volcano Mauna Loa. On the right, scientists collect a blue whale's snot in Mexico. (Photos by National Geographic)

If the BBC series Planet Earth was placed into a blender along with the movies Gravity and The Fifth Element; an electronic dance party; and Neil deGrasse Tyson’ cosmological musings, and that was shaped into a swirling mass of deeply personal stories intercut with scientific insight, the result would be close to One Strange Rock (National Geographic, Mondays at 10). It’s a fantastic new unscripted series.

One Strange Rock is an emotionally and visually rich brain party that uses the smallest details to illustrate the interconnectedness of everything on earth. It has a sublime soundtrack and staggeringly weird visuals that all connect together in surprising and smart ways. There’s:

Those descriptions do the show little justice. Describing such a visually rich television show is probably folly because it’s hard to convey the way all its elements wrapped themselves around me.

There’s a celebrity host, Will Smith, who is at ease and casual, and who gently nudges the narrative along—and, of course, his name and presence helps to draw attention to a documentary series about the planet.

Driving the story, though, are astronauts. In interviews rendered with low light and in black and white, they look directly at the camera and tell stories of their time in space.

They’re reflecting on their experiences and their observations, both scientific and emotional, and those stories open up to the planet at large. The first episode, “Gasp,” is about breathing—an astronaut tells us about a crisis he encountered while spacewalking, and the show effortlessly connects that to how the planet itself breathes.

One Strange Rock is both hard to describe and definitely showy, but there’s a clear purpose—delightfully odd, smart, and engaging television.

How One Strange Rock was produced

“I used to work for the BBC and we made lots of great science programs, but they were always quite cerebral, and we wanted this to be cerebral and emotional,” executive producer Jane Root told me. She  was the first woman to run the BBC and went on to run all of Discovery before forming her own production company, Nutopia, which produced One Strange Rock.

It’s a series that she calls “an experience, rather than a lecture.”

Creating that experience took 140 trips to 45 countries on six continents—oh, and space, too—with an international crew of 550 people.

After producers worked out details about the show’s look and feel and cast the astronauts, the production began started filming in July 2016. Most of it was wrapped by last September, though some footage was shot even later. For most of that year, at least four crews were out filming somewhere on earth.

Besides Will Smith, the other big name attached to the show is Darren Aronofsky, the director of trippy movies including The Swan, mother!, and Requiem for a Dream. He’s an executive producer, but Root emphasized that this was a collaborative effort. “You bring all these people together and then try and focus around a big idea,” she said.

One Strange Rock’s showrunner, Arif Nurmohamed, told me that the creative team gathered in November 2015, a few months after it’d been greenlit, to brainstorm, and landed on using astronauts’ stories as a lens for the planet.

The astronauts’ perspective on the planet not only guides the story, but is mirrored in the visuals: lots of shots rotate or spiral, which Nurmohamed said is “a reflection of the fact that, for the astronauts, there’s no up and down.”

The series’ “visual signatures” also include some of Aronofsky’s tropes, like a shot that follows a person or a vehicle, Nurmohamed said. “We shot a lot of wide angle close-up,” like The Revenant, he added.

There’s also a sequence filmed in space of astronaut Peggy Whitson that Nurmohamed said said was “pretty unprecedented,” because the production trained another astronaut to film like a documentary filmmaker. They even “storyboarded several sequences.” That makes it look different than most footage filmed in space, with tracking shots and reverse angles.

Although there was a lot of planning, the astronauts mostly spoke extemporaneously when they were interviewed by producers.

“Most of what you see is unscripted—very little is scripted,” Nurmohamed said. “They’re not presenters, they’re not actors. As soon as you ask people to deliver scripted lines, it falls apart. But they are incredibly engaging storytellers and we cast them on the basis that they were able to tell a story, that they had some connection to the themes of the show.” 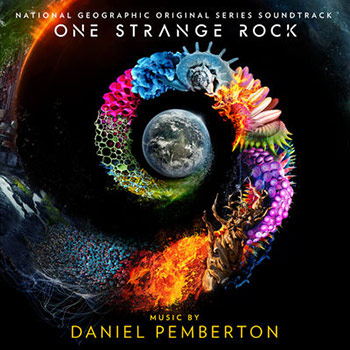 The One Strange Rock soundtrack by Daniel Pemberton

From those stories to the scenes shot in space, there were a lot of pieces that had to come together in editing.

Nature documentary series “tend to just focus on behavioral scenes and then just stitch them together. But what we were trying to do was something that was thematically much bigger—a reflection of our planet, an incredibly connected, calibrated system. You can’t take things in isolation,” Nurmohamed said.

All of this makes for a show that’s hard to describe but incredible to watch—and hear.

Daniel Pemberton, the composer of the movies Steve Jobs and Molly’s Game, produced a score that’s very electronic and, as Nurmohamed told me, “something that would feel different from the normal natural history score.”

Something that feels very different describes all of One Strange Rock, which really is nothing like any nature or science documentary series—or unscripted show—that I’ve ever seen.