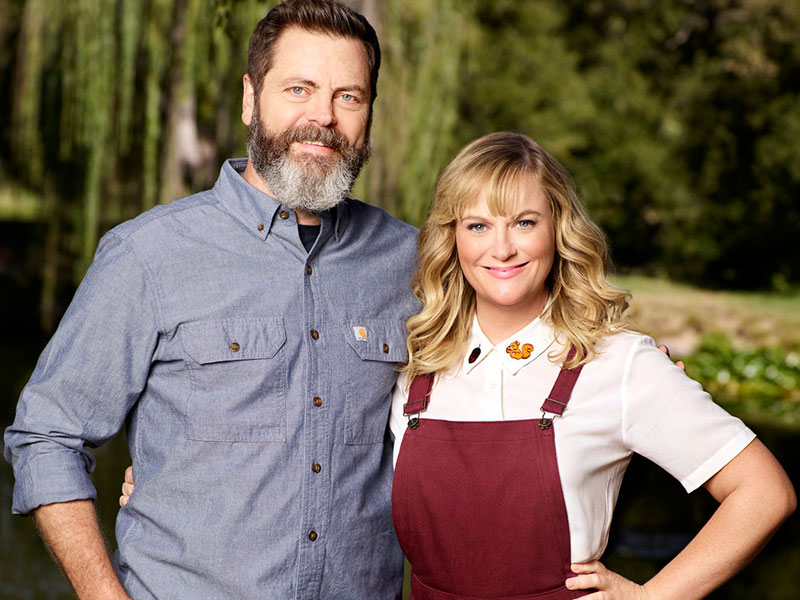 The crafting competition hosted by Amy Poehler and Nick Offerman has been renamed from The Handmade Project to Making It, and now has a debut date: July 31, when it will air Tuesdays at 10 after America’s Got Talent.

The show was described to me by the president of NBC’s alternative and reality TV group, Paul Telegdy, as “a celebration, and it’s fundamentally a show about love”—reaffirming what I thought when I first read about the show, which is it sounds like it could be the United States’ own homegrown version of The Great British Bake-Off, at least a show with a similarly warm sensibility and none of the tropes that infect so much American reality TV.

“This was pitched to us by Amy Poehler. She comes in and says, I want to pitch a reality show,” Telegdy told me. “For her, this is a love letter. Yes, it’s about who create with their hands.”

He says that, as a result of her involvement and attitude toward the show, casting was able to attract people. “In that community, they went wild, and the people that have come forward—they’re not people who would do any reality show, ever, were it not for the fact that’s Amy’s blessed that the fact that this will not have a bad bone in its body,” Telegdy says.

The six-episode first season was filmed in the fall, and much like GBBO, will have two hosts (Poehler and Offerman) and two judges (Barneys’ Simon Doonan and Etsy’s Dayna Isom Johnson).

Making It will have “a serene outdoor setting” and each episode will be themed (GBBO!), with two challenges:

“Each episode of the competition will consist of two projects, cleverly designed by Poehler and Offerman, that test the Makers’ ability to think outside of the box in unpredictable ways. Believing there is no better way to express yourself than by making things by hand, the challenges are also designed to bring out skilled insights and takeaway, touching personal stories and lots of laughs.

First, the ‘faster-craft’ round will be a timed challenge that will test their ability to not only work quickly but imaginatively as well. Next, the Makers will move to the ‘master craft collection,’ a one-of-a-kind themed challenge in which the competitors will need to use their expertise and get inventive in order to assemble a winning craft that fits the theme of that week. In the end, only one will emerge victorious and be named ‘Master Maker.'”

And to “friendly competition will focus on the character and camaraderie of the crafting community” while hosts “Poehler and Offerman will provide heartfelt encouragement, guidance and plenty of laughs.”

It will be executive produced by Anthony Dominici, who also EPed NBC’s First Dates, and worked on Top Model, The Amazing Race, and The Real World.