The new special Mister Rogers: It’s You I Like (PBS, tonight at 8 p.m., check local listings) doesn’t exactly serve as a comprehensive overview of Mister Rogers Neighborhood, which first debuted 50 years ago. But it does go in-depth into what the series accomplished, and what Fred Rogers did so effectively with a kids’ TV program that still resonates with kids and adults today.

The program includes many clips, of course, dipping into the Neighborhood to revisit what made it so special. David Newell, who played Mr. McFeely (“Speedy Delivery!”), told me that, through those clips, viewers will “see how serious [Fred was] about what he was doing. It was a mission.” 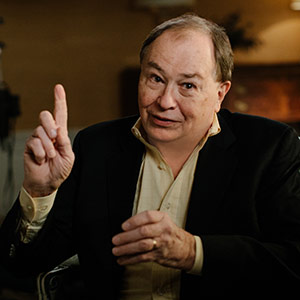 “The one thing it was hard to sometimes was explain to people Fred’s point. Sometimes they didn’t quite get it,” he added.

Turning to the special’s producers, Ellen Doherty and JoAnn Young, Newell said, “I think what you did in your hour is pull that all together. Everything that you picked out of his career was very important to him.”

Doherty, who’s the executive in charge of production at The Fred Rogers Company, told me that “it’s been really great to dive in and look at all these clips, and hear the stories about the intentionality, the thoughtfulness that Fred put into it. I think viewers will be really surprised. To look at a show that you watched as a child and see, Oh, this is how they did! They did all this on purpose!”

The things Fred Rogers did on purpose included insisting that Carol Spinney appear in costume as Big Bird in the Neighborhood of Make Believe only (Jim Henson wouldn’t let Spinney take the head off his costume to show that there was a person inside, but Rogers wanted to keep make believe separate from reality); and having a conversation with a kid who used a wheelchair; and showcasing women who were working and excelling in traditionally male careers or roles.

Rogers also cast François Clemmons, a black singer, as Officer Clemmons, a police officer who, in one episode, soaked his feet in a plastic pool alongside Mister Rogers, a scene that ended with Mister Rogers drying off Clemmons’ feet. In 1969.

I didn’t remember either of those scenes, but they legitimately surprised me as an adult because I can see how clearly Fred Rogers was using his show to teach kids in so many different ways. If the show was being filmed today, I can imagine people on Twitter attacking Mister Rogers for being political, even though he was not advocating for policy, but instead demonstrating basic, essential humanity, and illustrating his central ideas over and over again.

Newell—who looks younger to me now, at age 79, than he did to me in the 1980s, when he had a mustache, glasses, and that “Speedy Delivery” hat—told me that, with scenes like the one with Clemmons, Rogers “wasn’t making a big deal out of it; it was just there, it was a natural part of the neighborhood.”

An A-list actor behind the scenes in Mister Rogers’ Neighborhood

Mister Rogers: It’s You I Like is hosted by Michael Keaton, though not just because he’s a celebrity: Keaton actually worked as a production assistant on the show, and also appeared on camera in the May 9, 1975, episode as one of the “Flying Zookeeni Brothers.”

The documentary is technically a pledge special, meaning it’s designed for local stations to air and cut into for their pledge drives, and thus may not air tonight on your station. A DVD of the special with bonus material—including footage of the last day of production—will be available as a gift for those who pledge.

Creating an hour of television as a pledge special has its own; executive producer JoAnn Young told me that it’s constructed around three acts, so there can be breaks for the local station’s pledge drive. “Those pledge breaks are very important—you want to end on a very touching, upbeat, sentimental moment,” she said.

More difficult, though, was their task of choosing what to show: “We set about trying to winnow this big body of work into 60 minutes,” Young said. “We tried to hit the high spots.” They had help during that process from people who still work for the Fred Rogers Company, and Young said it was “truly a gift to be able to have these people still there, and all together, and having worked on Mister Rogers” for decades.

Newell himself started in 1967, “thinking that I had a job for one year,” and ended up as probably its second-most famous non-puppet cast member.

“At the end of each production day, [Fred Rogers] would go over to the piano—he played piano—and play the RKO newsreel theme,” Newell said. “He loved it. He said he got his feelings out through his fingers at the piano.”

Mister Rogers: It’s You I Like did a good job of getting my feelings out through my tear ducts several times while also helping me see Mister Rogers’ work through a different lens, so I agree with something else David Newell told me: “I think people will get a little more out of seeing this than they may have thought was in the Neighborhood.”