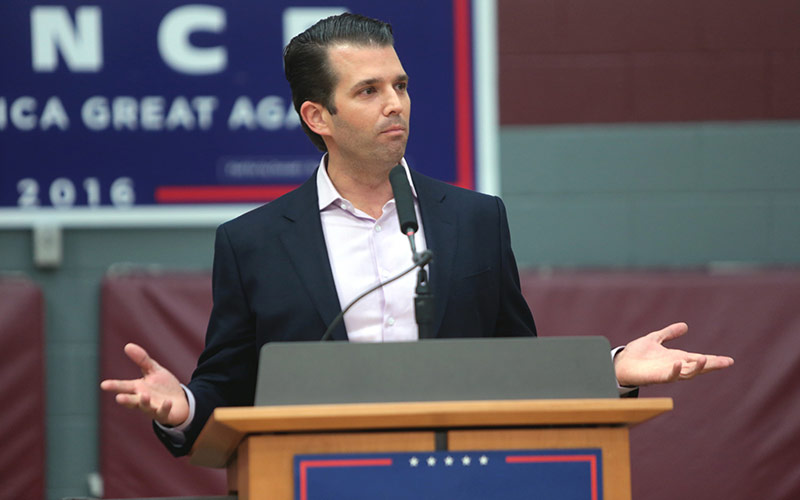 Donald Trump Jr. at a Tempe, Arizona, campaign rally for his father on Oct. 27, 2016. (Photo by Gage Skidmore)

Donald Trump Jr. and Aubrey O’Day, a contestant on the fifth season of The Celebrity Apprentice and a former singer of the group Danity Kane, which was formed on the MTV reality series Making the Band, had an affair in 2012, according to reports.

This is a story currently only being reported by tabloids and celebrity gossip sites, but there is curious evidence from the past:

The story was first reported by Perez Hilton, who said “almost broke up prior to her recent divorce filing because Don Jr. engaged in an extramarital relationship with Aubrey O’Day after she appeared on Celebrity Apprentice in 2012”.

Us Weekly reported that “According to multiple sources, the former Danity Kane band member and Trump’s affair began at the end of 2011 and continued until March 2012.” Season five of The Celebrity Apprentice taped in late 2011 and aired in the spring of 2012.

A person “close to” Aubrey told the magazine, “He told her it was over with his wife, that they were separated and he didn’t love her — all of that stuff … Aubrey fell for him hard. She thought they were going to be together for real.”

Us Weekly also dug up an old interview from March 2012, in which Aubrey said, “I like strong men that usually have big egos … which is also why we break up.”

Page Six adds that “Trump Sr. stepped in when he heard about the relationship with O’Day and told Don Jr. to ‘knock it off.'”

Last week, Donald Trump Jr.’s wife Vanessa filed for divorce. The couple said in a statement, “After 12 years of marriage, we have decided to go our separate ways. We will always have tremendous respect for each other and our families.” They had three kids in 2012; now they have five.