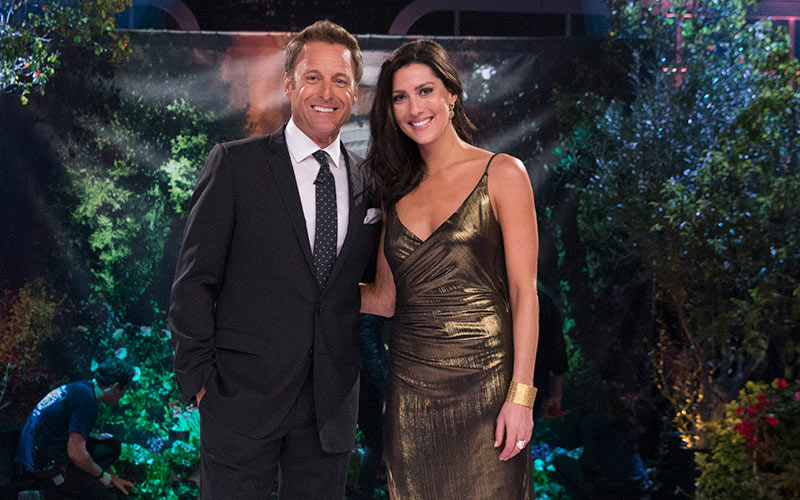 Chris Harrison and Becca Kufrin will stay together for another Bachelor franchise season, as Becca is the new Bachelorette. (Photo by Paul Hebert/ABC)

As The Bachelor aired an uncomfortable, emotionally raw breakup between Arie Luyendyk, Jr., and Becca Kufrin, former Bachelor star Sean Lowe tweeted, “I don’t like this one bit. Shouldn’t have filmed” and “It was too much. It was also cruel.”

The innocence of this response is both quaint and preposterous, especially coming from someone who knows how  all of this works, and went on the show four years after nearly the exact same thing happened in 2009, during the show’s 13th season, which was perhaps overshadowed by the finale of the following season.

What is really so different here from the humiliation the show constantly serves its audiences after filleting and charring its contestants?

This is what happens episode after episode, season after season; this is The Bachelor franchise. It’s not the break-up, which mostly have occurred off-camera—but still very much in public, in tabloids and splashed across the Internet—almost every single season. The only truly new thing here was a split screen showing two cameras’ angles at once.

Anyway, Sean is an example that the show, at its very core, involves real human beings with actual human emotions. That is not fake. More than most people on this planet, he can believe in the show as something more than mere entertainment because, after two seasons, he found a life partner in the middle of this massive, carefully choreographed production. So perhaps his blinders can be forgiven.

I’m appreciative, though, that Sean is ultimately calling the show itself out for its behavior—something Bachelor Nation and the uncritical press rarely do.

Instead, proving they’re as manipulatable and aware as Play-Doh, they turned their anger toward Arie, who is not blameless but is also not the person who chose to ambush Becca with cameras and then make that the climax of the season backed by the full power of “America’s Network.”

The camera’s lens is powerful, and though we know there are people behind it, controlling what we see, the only people available to focus on are those in the frame—or the two frames of the split screen, in this case.

ATFR was more like The Bachelorette season 14’s premiere

The Bachelor franchise was not designed to produce romance, and that we expect it to is kind of insane, considering how its participants have limited contact in ludicrously elaborate contexts over just a few weeks, a structure so superficial that it makes Tinder and Grindr seem like the Mariana Trench.

No, The Bachelor was designed to produce ratings, and that’s exactly what this finale did.

It worked! Yes, that percentage increase is attributable to the show’s well-established hype machine, but also to the utter lack of interest and diminished ratings that previous episodes had.

After the Final Rose will likely have a similar press release, though perhaps its ratings should count for The Bachelorette season 14 was more like the premiere of Becca’s Bachelorette than a conclusion to this season. After it went through the motions of Arie proposing to Lauren Burnham—this show loves its proposals, as meaningless as they are—it went on to introduce Becca to some of her new suitors.

What went down on Monday and Tuesday night was a rather brilliant strategy that did its job. With one two-night finale, ABC and The Bachelor’s producers solved two problems: 1) an uninspired, poorly cast season of The Bachelor and its subsequent low ratings, and 2) the low ratings of the most recent Bachelorette.

Having learned last summer that a considerable part of its audience wasn’t interested in watching a black Bachelorette find love, the franchise has now returned to the safe territory of a white woman as the lead—and also avoided one thing (of many) that hurt Arie and his season, which is that there was no reason to care about him.

In an ongoing, decade-long soap, but one who now has a story people are invested in, as she said in perhaps the most meta line spoken all season: “it just adds to my story.” Becca has been jilted, dumped, and humiliated. And now she’s coming back for more.