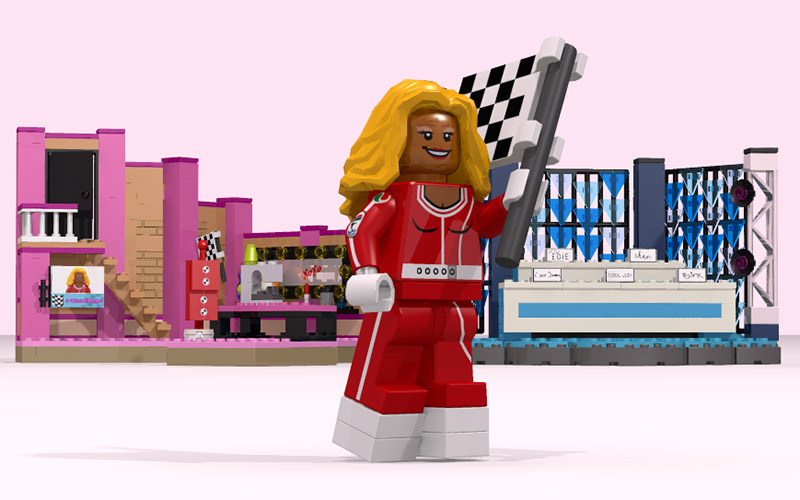 The RuPaul's Drag Race LEGO set concept created by Mark, which is now being considered for production.

The Lego Review Board is considering a RuPaul’s Drag Race themed Lego set, and will decide within the next few months whether or not to put it into production. If they decide to move forward, that process “takes several months,” Lego says.

The proposal, titled RuPaul’s Brick Race, includes an incredibly detailed version of the show’s workroom, and a version of its Snatch Game set—though it’s been renamed “Clutch Game” to be “family-friendly.”

The other minifigs are five Drag Race contestants, but in costume for Snatch Game: Jinkx Monsoon as Little Edie, Milk as Julia Child, Katya Zamolodchikova as Björk, Bianca Del Rio as Judge Judy, and Alyssa Edwards as Katy Perry.

The person behind the concept and campaign, Mark, whose screen name is SeeMarkGeek, wrote that he created it because “the subject material this set is based on is whimsical, colourful and full of life and I think these are qualities that marry well with the medium of LEGO.”

The official Drag Race Facebook page linked to a story on Logo’s site about the project, and added, “She’s under review!!! Fingers crossed, y’all!!”

Since more than 10,000 people supported the project on Lego’s site, the company moved it on to the review phase in December, detailing the next steps in a public letter that praised the proposal: “Your colourful and playable project has no doubt captured the interest and attention of thousands of RuPaul fans around the globe.”

It’s one of eight projects under review, including a LEGO version of the Christmas Story house. An amazing Golden Girls-themed LEGO set was previously rejected, so it’s certainly not a guarantee that Drag Race will become immortalized in plastic brick toys.