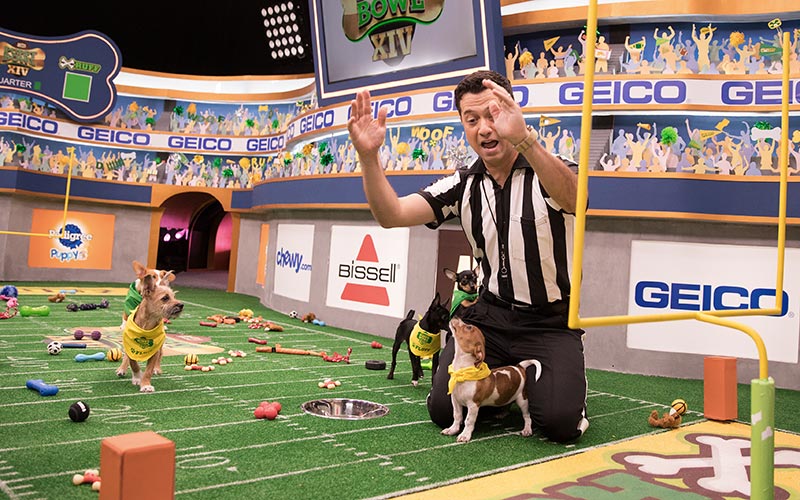 Sunday is the Super Bowl, which means it’s also the 14th annual Puppy Bowl—or more correctly, it’s Puppy Bowl XIV. Animal Planet’s gaggle of puppies playing around is not a serious competition, but it does have a serious mission, and producing it is no joke.

The 2018 Puppy Bowl (Animal Planet, Sunday at 3) has a new stadium with 17 cameras, including in the goal posts, and the festivities begin with the national anthem performed on the piano by Jokgu, the chicken from America’s Got Talent.

Also new this year: the first-ever Dog Bowl (Animal Planet, Saturday at 8), which has basically the same format but features older dogs. Both shows offer entertainment, of course, but also try to bring attention to shelter animals who are in need of adoption.

Since it debuted in 2005, it’s expanded its mission.

“Now it’s not just about the cute puppies who need homes,” Puppy Bowl referee—sorry, rufferee—Dan Schachner told me. “Now it’s about the special needs dogs that are probably languishing in shelters that need homes. Now it’s about the older dogs. Any dog two years and up has a greater chance of being euthanized than a puppy, and they are often the first in line to meet that unfortunate end.”

Helping animals—dogs and cats—in need of rescue from shelters is “why we do what we do,” he said. (Search for animals in need of adoption near you.)

The Dog Bowl will feature adult dogs—that means they’re older than two, and have an average age of seven.

And the puppies this year include rescues from hurricane-devastated areas in Houston, Florida, and Puerto Rico, and a pit bull from Villalobos Rescue Center, which is featured on Animal Planet’s long-running series Pit Bulls & Parolees.

Schachner is returning for his seventh year of puppy puns (“I’ve done what I thought could be every possible pun” but “I try not to repeat my fouls from previous years,” he said), and he’s proud of the success the show has had.

“In the time that I’ve just been able to be a very small part of it, we’ve seen an uptick—all of our partner shelters, every single one of them, sees an uptick in adoption once the Puppy Bowl airs. That adoption continues throughout the year,” he said.

“The numbers don’t lie: Six years ago, over two million dogs and cats, on average, were euthanized every single year in shelters, rescue centers. Now that number’s down to 1.5 million,” Schachner said. “We’re not fully responsible—I think there’s a cultural change in how people look at rescue dogs, but I think we’re a small part of that change. Obviously, we’d like to get those numbers down even more.”

The Puppy Bowl “always had that subversive, subtle little undertone of adopt, don’t shop, and we did become more blatant with it,” he said. “We had to wait for the country and the world to catch up to what we were saying before we could be louder.”

With the Dog Bowl and messaging during this year’s and past Puppy Bowls, he said “we’re expanding our message, and we’re seeing results.”

How the Puppy Bowl is filmed

Although the Puppy Bowl is two hours on television, it takes a full week to film, including two days of dogs playing around—and that means a set with animals plus 100 volunteer dog wranglers, never mind the television crew.

Pre-production in the summer, and then films for a week in October in New York City. “It does take a week because there are so many elements that go into our program,” Schachner told me.

Filming last fall was two days with the dogs, one day with cats, another day for marketing and product integration, and then a day filming a winter Olympic-themed version for European viewers.

Like any television set, it’s not always action. “Sometimes it is like watching paint dry. It is the opposite of chaos. You are waiting for something to happen. That’s why it does take hours and hours to film something that could be cobbled into a two-hour program,” he said. “Some [dogs] are napping, some are lounging, some are sniffing around exploring.”

“I think the process is fascinating. I think people like to know, to peek behind the curtain to see how we actually create this thing,” he added. “It is a machine.”