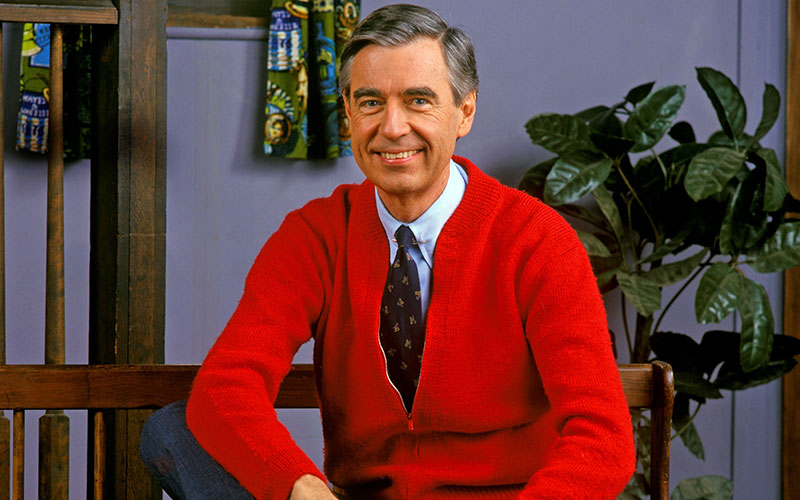 Fred Rogers on his show Mister Rogers Neighborhood, which debuted 50 years ago today. (Photo by PBS)

Feb. 19, 1968 was the first U.S. broadcast of Mister Rogers’ Neighborhood, the show that was there for generations of kids. Mister Rogers helped us understand everything from how crayons were made to why we are okay just the way we are.

Fred Rogers’ series, on which he talked directly to children through the camera, actually originated five years before 1968, as a show that first aired on CBC. Today, it’s been off the air for more than 16 years, since August of 2001, and Mister Rogers hasn’t been alive since Feb. 27, 2003.

But his lessons still remain as quietly potent as always, which explains why he’s become such a pop culture icon that he’s becoming a Pop! toy and inspired this wonderful remix of his insight by John D. Boswell:

In a few weeks, PBS will be airing a special, Mister Rogers: It’s You I Like, hosted by Michael Keaton, who actually worked on the show. I recently interviewed its producers—and Mr. McFeeley!—and will publish a story about it on March 5.

The special—and all of the remembrances today—made it clear that Mister Rogers touched a lot of lives, and that’s certainly true for me. Mister Rogers was a friend I never met, but spent time with every day.

And he continues to be someone we turn to for insight, whether it’s about the value of public broadcasting or what to do after tragedy or disaster.

Mister Rogers recorded this message to his television neighbors after the show ended and a year after Sept. 11, 2001, but like his TV work, it has a timeless message:

“I’m just so proud of all of you who’ve grown up with us, and I know how I tough it is some days to look with hope and confidence ont he months and years ahead. But I would like tell you what I often told you when you were much younger: I like you just the way you are. And what’s more, I’m so grateful to you for helping the children in your life to know that you’ll do everything you can to keep them safe and to help them express their feelings in ways that will bring healing in many different neighborhoods. It’s such a good feeling to know that we’re lifelong friends.”

Happy anniversary, Mister Rogers. You and your work live on every day in all of us.