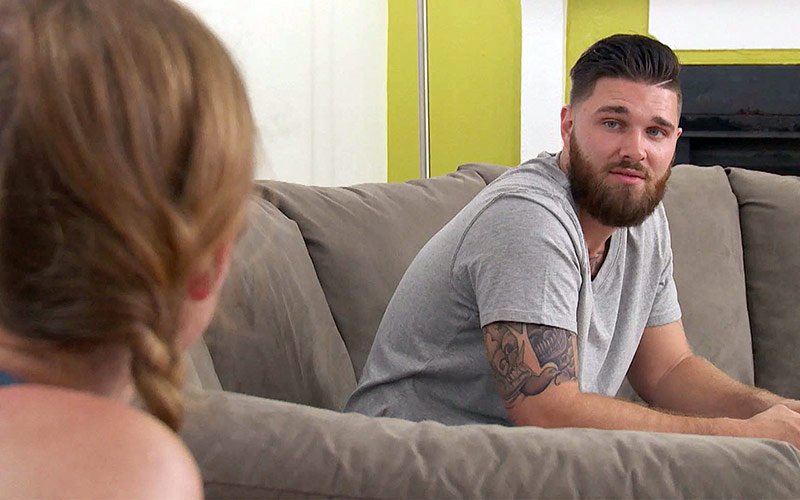 Garrett Tanner and Johnna DiGrigoli on Love After Lockup. (Photo by WE tv)

Love after Lockup has gotten more time: The WE tv reality series, which follows people who’ve fallen in love with inmates, was renewed for a second season.

Both its ratings and its origin story are an aberration for reality TV shows. That’s especially true in the current environment, where most shows lose viewers after their premieres. Love After Lockup did the opposite.

In its announcement of the second-season renewal, WE tv said the show is the “fastest-growing new cable series for 2018” with ratings that increased “86 percent among women 25-54 and 62 percent among adults 25-54 from the premiere in Nielsen live+3 ratings.”

But where did this unexpected success come from?

Conceiving, then casting, Love After Lockup

Love After Lockup is produced by Sharp Entertainment, which also produces TLC’s 90 Day Fiance and Travel Channel’s Man v. Food, but the idea didn’t come from them.

The idea wasn’t pitched to the network by an outside production company, but instead was generated by WE tv’s own employees as part of an annual internal “pitch fest.” It’s a mandatory event that involves everyone in the company, who brainstorm ideas for new shows after forming new teams of “people who don’t [typically] work with or talk to each other,” Juris told me.

“Sometimes the best ideas come from your staff,” he said. “I don’t think people tap their own internal resources enough.”

The employees’ idea for Love After Lockup was “really intriguing,” but Juris said the next question was, “Can we make it and can we make it well?” He added that there was a significant “first step: is this castable?”

Casting was “not very easy,” Juris said. “TV shows are difficult to produce on a good day,” and this was especially complicated, since inmates might not get out, or their release date might change—which complicates production.

For two of the six season-one couples, that’s exactly what happened. But Juris said the network embraced it: “That’s what makes it interesting and real. We’re with the people when they discover they’re not getting out of prison.”

Casting producers reached out to prison groups and other sources, and had a narrow range of possibilities: people who’d met while one of them was in prison, and, of course, was getting out soon.

The inmate also had to be “relatable”—so “not a mass murderer,” Juris said—people “who’ve changed, who’ve learned, so we could see their transformation as well.”

I asked about safety considerations, for the cast and crew, and Juris said, “I don’t think it’s any different from any of our shows. As with any relationships, we’re capturing what’s really happening and capturing real life. There are many explosive moments in many shows, so we’re always very aware of that, so we go into every show with security and safety in mind, because you never really do know what or when anything is going to happen when you’re doing reality TV.”

The former inmate cast members, he added, are “getting out of prison, and they’re on parole—you’re a little more assured that they’re going to be very calm and collected about everything.”

Plans for Love After Lockup season 2, and fan response

Season one has seven episodes, but that’s actually one more than was planned. “We typically start with six episodes,” WE tv president Mark Juris told me. “I often think of the first season as the pilot. This allows you to not over-invest.”

The season finale next Friday won’t be the end of these couples’ stories. The network is planning specials to follow up with season one’s couples, and perhaps there could even be a spin-off show.

I asked if any of the same—Johnna and Garrett, Andrea and Lamar, Mary and Dominic, Alla and James, Angela and Tony, or Scott and Lizzie—would be returning for season two, and Juris said, “It’s something we’re talking about. These stories are really fascinating. At the finale, we’ll say where the couples are now: some are together, some are not.”

He did suggest that the two couples who haven’t yet met because one of them remains imprisoned will probably be on season two, so the show will include their post-lockup lives.

Although the popularity of Love After Lockup earned it a second season, the show wasn’t marketed or promoted. “To market something now traditionally, it takes a tremendous amount of money,” Juris told me. “In our research, we find that work of mouth is the best, most effective,” in part because “people are somewhat immune to ads.”

The network did circulate a supertrailer online, and that generated interest before the show debuted, leading to “active fan engagement,” Juris said. “It’s pretty terrific to see that people taking that much time to engage with your show.”

He cited the Facebook group Love After Lockup WE TV Savage Edition, which was created by fans and now has more than 3,000 members.

Juris added that “unexpected love stories are always fascinating, and this is something you’ve not seen on TV,” though “you’ve heard of it,” so the show doesn’t take much explanation.

“Good shows get talked about,” he said. “You can have $10 million marketing budget; if a show isn’t good, it doesn’t help.”