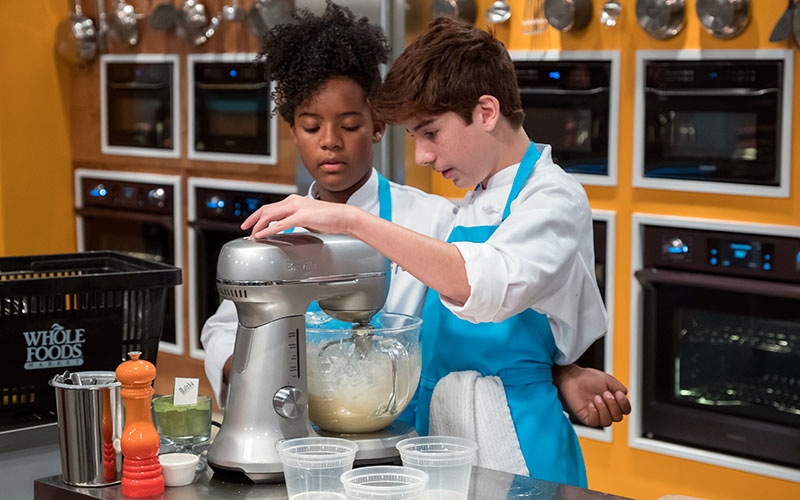 Top Chef Junior contestants Rahanna Martinez and Owen Pereira compete in a challenge in which they had to work together, each using just one hand. (Photo by Dale Berman/Universal Kids)

After a brief hiatus lasting more than two years, it’s the return of Ask Andy, the creatively named feature in which I answer your questions. Cue the trumpets!

I don’t have a good reason for this long break, though I have guilt for the large archive of questions I have in my to-do app that stretches back more than a year. Many of those are ones I couldn’t answer—especially ones asking for factual information about something that happens behind the scenes. They’re good questions, many of which I’ve unsuccessfully tried to find answers to.

I shall keep trying, and in the meantime, hope to be able to answer other questions, like the three below. My intention is to publish at least one Q&A column a month, perhaps two. But let’s not get crazy.

Please: Send me your questions! If you sent something I didn’t answer, feel free to resend.

How can 60 Days In return to the same prison?

Hey Andy. Looks like your favorite show (lol) 60 Days In is coming back on Jan. 1. I thought this series was finished. It looks like they are back in the same jail in Atlanta. How can this be kept secret when guards and I would think prisoners or their families have seen the show? —Laura J.

That’s an excellent question, Laura. And there’s a simple answer: the show films two seasons at a time, finishing the second before the first is released.

The network announced the Atlanta-set seasons one year ago, which presumably was after production completed, in order to keep it secret. So if another two seasons are coming—and I don’t know one way or the other right now—they may have be filming now, or perhaps filmed last year.

I was watching the series Top Chef Junior before the original Top Chef series was back up and running for this season. However, the last episode on Bravo (channel 129 on my dish network) aired before Christmas without Top Chef Junior finishing out its season with a winner. What has happened to Top Chef Junior? —Teresa

Thanks for the question, Teresa, and I have good news: Top Chef Junior is still here, and concludes its first season tomorrow on Universal Kids, the network formerly known as Sprout.

The entire season is available on demand, and those who don’t have cable can buy the whole season on Amazon or via iTunes.

The show did disappear from Bravo—or more correctly, it appeared briefly on Bravo to try to capture the attention of Top Chef fans like you.

But if that was an effort to try to get people to watch the show on Universal Kids, I wonder how successful it was. I had the same issue: I recorded the Bravo version, assuming the show’s episodes would be repeated on Bravo, but ultimately only one episode recorded, and I had to go watch the season on demand via Universal Kids.

I wonder about this network strategy. Last year, a few weeks after The Good Fight premiered on CBS, my grandfather asked me what happened to it. He’d missed CBS’ messaging that, in order to see the rest of the series, they’d have to subscribe to CBS All Access—no easy task for those used to just watching on CBS.

These are anecdotal examples, but it seems like if networks are trying to get us to sample a show and then follow it to a different home, they might want to do a better job communicating that.

What show do you dread covering?

What show do or did you dread covering because you hated it so much (besides Big Brother)? Your Bachelor article made me think of that question. —Paul E.

Thanks for the thought-provoking question, Paul.

While I may come across as quite grumpy sometimes, I truly don’t dread covering anything. If ever I’ve felt anything resembling dread toward a show, I stop covering it.

I used to love writing Amazing Race recaps, highlighting funny things the cast said, but at some point it stopped being fun for me, so I stopped. Better that than to pretend, I think. I hate reading things that feel forced, and don’t want that to subject anyone to that.

I have the luxury of writing about what I want to here. Some shows demand attention or coverage because of their importance, newsworthiness, or even popularity. And sometimes, yes, that means I occasionally (okay every day) write about things that drive me mad or annoy me. But those things have inspired a response, and it’s that response I’m sharing.

In the year-end survey—and thank you so much for those responses; I enjoyed reading all of them—more than one person mentioned that they missed a certain kind of response I’d have to a show that aired the night before. The “hey, did you see that?” reaction.

I do too. I miss the days when reality TV constantly felt new and surprising, and there were fewer shows, and there were no DVRs so we all had to watch at the exact same time. Those were the days when there was no social media, so there weren’t real-time reactions to those moments, from me or from other people.

Also, back then—almost 18 years ago!—reality TV was very different. Just look at The Real World for evidence of how drastically it’s changed. Back then there were a few shows; now there are an absurd number, and and most felt fresh, not just copies of copies of copies that were trying too hard.

Also, 18 years ago, I was very different. One small part of that is the effect of almost two decades of watching and writing about and reporting on unscripted TV, which has changed how I see shows, sometimes for the better, sometimes for the worse.

So while there isn’t dread, there has been a lot of change. But I still find a lot to love in this genre.

Ask Andy: Do you have a question for me? E-mail it to me!