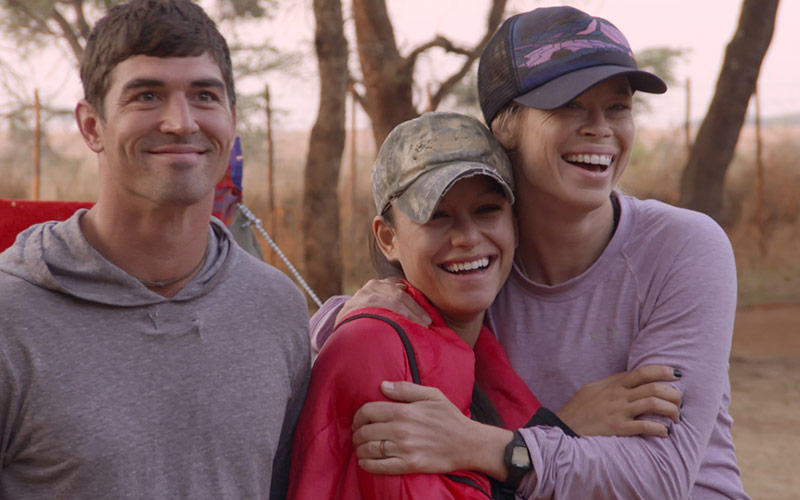 Big Brother contestants Cody and Jessica with fellow racer Kristi on the Feb. 7 episode of The Amazing Race 30. (Photo by CBS)

The 30th season of The Amazing Race has concluded, and the winners of $1 million are the couple who met on Big Brother, Jessica Graf and Cody Nickson.

As an Amazing Race team and couple, Cody and Jessica appeared to be strong and functional—but their edit also seemed exactly like a continuation of the storyline started on Big Brother.

And that storyline was rather manufactured and reality-distorting, as described perfectly in this article about Big Brother 19’s editing:

“…producers packaged Cody and Jessica as the season’s one true romance, with their bond only strengthened by their isolation. This may explain why Cody’s blatantly transphobic comments and Jessica’s racist nicknames have been absent from the show, even as the outcry on social media from those watching the feeds has been loud and consistent. The show positioned them as underdogs, and while things often got ugly with their competitors, their personal connection was what humanized them. More specifically, Cody’s efforts to protect his girlfriend cast him, at times, as an archetypal male hero—and bigotry doesn’t fit that narrative.”

There are no live feeds on The Amazing Race, so we don’t know what has been edited out, if anything. But we do know, clearly, that they were consistently humanized by the edit, which consistently emphasized Cody’s strength and Jessica’s dependence upon him as a teammate.

Its winners aside, it was a strong finale, and the penultimate leg had truly challenging challenges that tripped up several teams and saw Henry and Evan complete a speedbump and go from last place to first place, only the third time in race history that’s happened.

And this was a decent season of the race. I tuned back in and watched most of it because last season felt refreshed to me, though I was disappointed that this season turned away from the strangers-paired-up structure introduced last season.

While the new twists were interesting experiments, the change that I liked the best was the accelerated schedule and doubled-up episodes. The back-to-back episodes kept up the momentum in a race that has increasingly equalized its teams at the start of, or during, many legs of the race.

I’d rather CBS continue that and drop its casting of noxious Big Brother couples, but CBS has established itself as a place for people to express vile, bigoted ideas about other people and then be rewarded with future CBS jobs and money, so I don’t expect that to change.