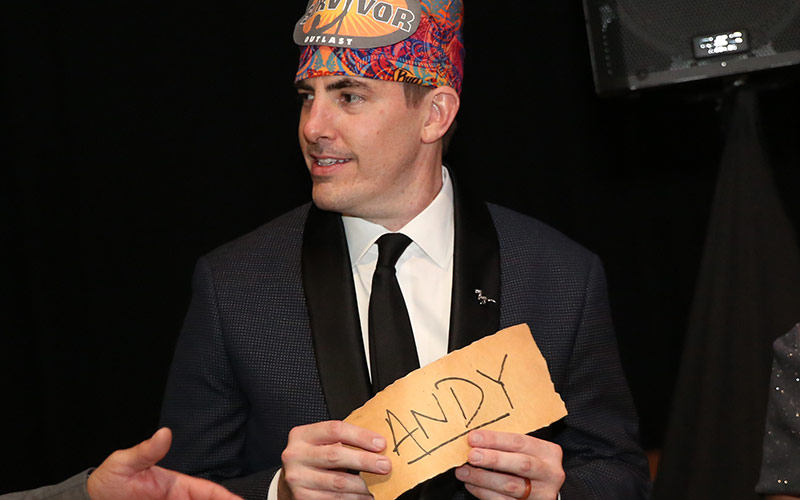 Me, at my wedding, as my in-laws voted me into their family with a hand-crafted Survivor buff recreations of an actual voting parchment that Jeff Probst once wrote my name on. (Photo by Live Happy Studio)

Last year, borrowing from a favorite newspaper columnist, I started a new tradition: sharing with you who I am, what I do, what I believe, and things you should know. A new year has arrived, so it’s time to update you with a new edition. For 2018, I’ve borrowed from that piece, updating some parts and copying others verbatim.

What I do here

Hi. I’m Andy. I love and believe in reality television. I think reality shows are both entertainment and art, and preferably both at the same time. I want to watch reality television that gives attention to both content and craft (the way a show is constructed, including its cinematography and editing).

I think reality TV is a big tent, including everything from documentary to game shows. What they share is their focus on real people’s experiences, decisions, reactions, and lives.

I started reality blurred in the summer of 2000 because 1) I’d recently been fired from a job recapping The Real World and 2) I was constantly searching the Internet for information about reality TV shows, so I thought I’d share what I was finding in blog form. (Read the full origin story.)

This site has evolved a lot since then, and so, I hope, have I.

Today, what I publish here ranges from reporting to reviews to commentary, and usually mixes the two. I trust that readers can separate facts from opinion. That’s in part because I don’t think journalists help themselves or their readers by always being objective, neutral observers. I do think journalists should always be independent, courageous, and fair to everyone and every thing they cover.

Instead of having a “view from nowhere,” I think journalists need to build trust with their audiences by being honest: about who they are, what they’re doing, how they do it, and what happens when they screw up. (And yep, I’ve certainly made mistakes, which is embarrassing whether it’s a typo or an incorrect story—though I won’t let shame affect my efforts to get things right.)

I often write to understand what I just watched, and sometimes just to react. I’m trying to do less reacting and more understanding.

I love to discuss and debate, and to talk about television and culture, so I welcome disagreement and challenges, in the comments or in full essays. I’m intolerant only of 1) people who are intolerant of other human beings based on who they are, and 2) people who want to shut down or dismiss a discussion because they disagree yet don’t actually want to think. Responses such as, “if you don’t like it, don’t watch” are infuriating.

That’s because there’s value in discussing television and how it affects us. I also think people’s decisions are fair game for criticism, though I’m trying to be more empathetic in my reactions.

The stories I publish here—my own criticism and reporting, and writing and commentary by others—add to the conversation. At least, I hope they do, and that’s why why stories here are infused with analysis and perspective: my informed perspective is what I can offer to the world.

reality blurred is an independent publication. Its editorial contents are determined by me alone.

This site earns money from advertising, anonymous survey questions, and from affiliate links—and increasingly from people like you. Advertising is handled by third parties, so I don’t know what ads you’re being shown. Internet advertising is weird, and one of the reasons why, last year, I started asking for your support.

I’m a member of the Television Critics Association, a professional organization of 200+ people who cover television in various roles. Its primary function is to stage two annual press tours in Los Angeles, where networks present their new shows and offer opportunities for connecting with their producers, talent, publicists, and executives, sometimes over free cocktails.

I have working, professional relationships with publicists, producers, and people who’ve been on reality TV. Their insight—which often ends up attributed to them in stories here—helps me be a better reporter, critic, and writer.

I’m a registered Democrat because, in the state of Florida, non-affiliated voters cannot vote in our primary elections. I’ve voted for Republicans and Democrats throughout my life, for president on down, though not for Donald Trump. While he’s continuing to make headlines and television, and like the idea of a bipartisan president or someone who disrupts the establishment that exists just to enrich and sustain itself, I haven’t seen him do any of that yet.

I don’t cover politics, but I do write about issues that television raises. I think popular culture is political—and we now have indisputable evidence of that in The White House itself.

I’m saving for retirement, but those investments are managed for me, mostly because I don’t know what I’m doing. When I could, I’ve requested those be invested in socially responsible companies.

I am an owner of 12 shares of Disney stock, meaning I now own some of ABC and Marvel, and will soon own tiny fractions of companies such as 20th Century Fox Television, FX, and National Geographic if the merger goes through. I cannot imagine that my grandmother ever thought that a fun Christmas gift for her Disney World-loving grandson would some day mean ownership in a massive media conglomerate.

None of these potential conflicts affect what I cover or how I cover it. I make decisions about what to cover only based on what I think is newsworthy, fascinating, infuriating, or interesting.

Other things about me

In addition to my writing here, I freelance, usually writing longer pieces for other publications. I’m also a visiting assistant professor at Stetson University, which covers my health insurance and also gives me a couple days a week during which I can share the knowledge and experience I have with the next generation of writers, journalists, arts critics. They inspire me, and I love to speak to up-and-coming journalists at conferences and elsewhere.

I’m married—a phrase I’m still getting used to, and am still thrilled about. There’s a story about the photo above, and it’s here.

The grandmother who gave me Disney stock also gave me a subscription to USA TODAY when I was in high school, because I loved reading the newspaper. Also I liked its design and its brevity, because I didn’t have much of an attention span. I still don’t.

I like shopping at Target for its clean, bright aesthetic; flying Southwest for its easy boarding procedure and fun flight attendants; and eating at Chipotle for its consistency and freshness. As a vegetarian, I am not fond of the way Chipotle’s wonderful employees touch chicken or steak with their gloved hands or a utensil and then touch my vegetables with the same hand or utensil.

I like things to be in their places. I want my inboxes to be empty and my DVR to be clear, and feel anxiety when they’re not. My inboxes are just one of the many places where anxiety shows up in my life.

I write criticism of others’ work, but reserve the harshest criticism for myself, which I’m working on. I’m an ever-evolving work in progress, as is this site.

Thank you for reading it, and sharing in my desire to have smart, informed conversations about popular culture. If you have questions, ideas, or things to share, now or any time this year, I’m listening.