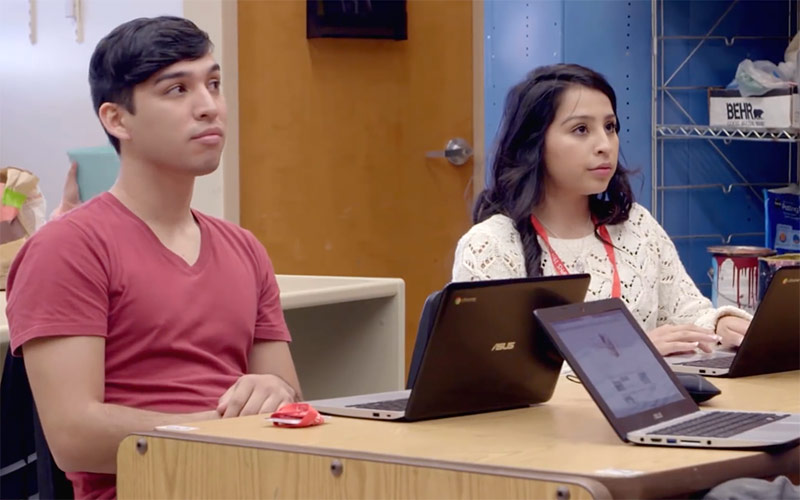 Jorge and Lina, adult siblings who are pretending to be high school students on A&E's Undercover High.

Undercover High, which sends adults into high schools to find out what’s going on, has all of the right pieces: an important part of our society, education, that needs more public attention; a polished production, with efficient storytelling and smooth editing; and charismatic young stars, both 20-somethings who are pretending to be high school students and some of the actual high school students themselves.

Alas, for the purpose of this show, these pieces are assembled into a Jenga tower: it’s impressive, but once you start pulling out pieces and asking questions, it crumbles.

For its first six minutes, while it’s establishing the strengths and struggles of high school students, Undercover High (A&E, Tuesdays at 10) works brilliantly and had my attention with its clear, unsentimental, nonjudgmental look at high school and the problems.

But then A&E has to be A&E and wedge in some unnecessary artificiality, sending adults in as students at Highland Park High School in Topeka, Kansas.

Artificiality itself isn’t the problem, because just having camera crews injects the school with artificiality and perhaps self-consciouness that didn’t exist before. The problem is that it is truly unnecessary to send adults in—and that also introduces even more problems, which we’ll get to in a minute.

The problems and solutions are presented in the television equivalent of pointing at things. Perhaps it goes more in depth later, but for now, it’s gawking: Look at that! Kids are on their phones and not paying attention! The show even gets close to presenting the high school students it allegedly cares about as assholes who are put down their phones only to be rude to new kids.

There’s no connection to larger societal issues (many of us are on our phones and not paying attention) or systemic problems, nor much depth to the individuals or their struggles.

Compare that to another A&E show, Hoarders—which some viewers found to be gross and exploitative, and which sometimes was, but which always had a clear mission: help people in crisis, a hoarder and their family, supporting them while illustrating mental illness to the audience.

The result was real-world change from a show that not only helped the on-screen individuals, but helped elevate hoarding disorder’s classification among professionals and also gave people everywhere terminology and community to explain what was happening in their own families.

Why does Undercover High need to go undercover?

Dr. Tiffany Anderson, the new superintendent, gets the task of presenting Undercover High’s producers’ argument to the camera: “What’s life like in high school? Unless you’re the person walking in those shoes, you really don’t know what that’s like.”

There’s something quaint about imagining that the only way to understand kids is to lie to them. Is this not the generation that confesses all on social media, and feels less encumbered by stigma? Aren’t they constantly being dinged for being too open and honest?

One of the participants, Lina, is accidentally added to a text thread with 22 high school guys who are talking about her—specifically, about wanting to have sex with her (“who’s gonna get it bro”; “lets put money on it”) and even sexually assault her (“Ima rape that bitch”).

It is absolutely horrifying.

But Undercover High wants us to think that the only way to know that this was happening is because Lina was participating in this experiment, and isn’t A&E wonderful for finally bringing this to light, praise A&E!

Of course, all anyone has to do to find out that this occurs and is a massive problem is to ask any teenager or young woman.

The irony is that the show does do this, interviewing students in the hallways and asking them about high school life. So there is no reason to have adults pretending to be kids, especially because that drags the series into ethical and legal territory it only barely mentions and never resolves.

This is a television series—and network, and school, and school district—that are all actively encouraging adults to form relationships with teenagers under the pretense that they’re peers. Isn’t that absurdly problematic?

The participants aren’t to blame, and they all seem eager to learn. Some have more clearly defined goals than others, such as the youth pastor who wants to understand the kids he works with. Others want to help high school students through their work. But how does forming a bond built on a lie help anything?

By parachuting in adults, the show raises more questions than it answers. Like: How many of these kids consented, and why? (Some faces are blurred but so minimally, anyone who knows them will know who they are.) What rules and guidelines were in place to protect everyone legally and ethically?

How will this affect the actual high school students once they find out their new young friends—never mind all the adults—were lying? What’s it like to have your words hacked into a new sentence by editors and then broadcast to the world?

Undercover High does address its own production, but only in the minimal way it addresses most issues,. On-screen text says that “students have been told that a TV series is being filmed,” and that cameras showed up before the undercover kids. (Production took place last January through May.)

There’s some brief, playful footage of the kids interacting with cameras and one beautiful shot of a student looking skeptically at recording equipment that’s been placed on her desk. That’s one of the moments when the pieces click together and the potential is clear.

Undercover High is not bad, but it’s also not necessary. Its thesis is undercut frequently, including by the existence of this great series, which does an extraordinary job of illustrating high school life.

I’d actually bet there are young adults mentoring high school students currently who could be filmed without having to pay for a 25-year-old to get fake braces so she could seem young and go undercover.

There’s also another way to find out what high school life is like: Ask high school students. Questions. About their lives.