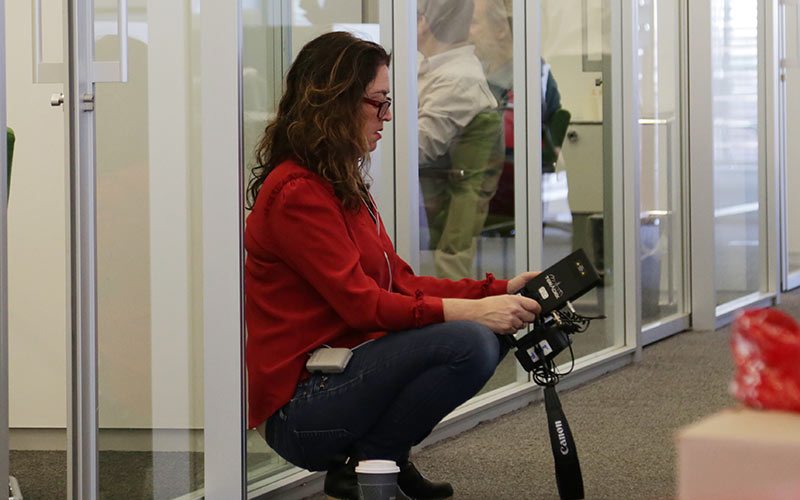 Liz Garbus, the executive producer and director of Showtime's The Fourth Estate. (Photo by UJP Production)

Showtime’s unscripted television will continue to go behind the scenes of national news—in the third season of The Circus and in a new series that was filmed at the New York Times over the past year. The network will also air a documentary about former Army intelligence analyst Chelsea Manning, who released classified material to Wikileaks, and another documentary series about the opioid crisis called The Trade.

The New York Times and its reporters and editors are the subject of The Fourth Estate, a “multi-part documentary series” produced and directed by Emmy-winning, Oscar-nominated filmmaker Liz Garbus, who directed What Happened, Miss Simone?.

Since inauguration day, Garbus has been filming inside the New York Times.

CNN’s Brian Stelter reported about the series in August, after Politico reported that cameras “filmed meetings, reporters on the phone and other material in both Washington and New York.”

Showtime did not say how many episodes there will be of the series, which premieres May 27. A press release said that the show “illuminates critical issues facing journalism today—including the challenge to the bedrock concept of truth, the changing role of the media, and the Times’ response to President Trump’s war of words—through extraordinary access, on-the-scene filmmaking and exclusive sit-down interviews.”

The network also announced a feature-length documentary about formerly imprisoned whistleblower Chelsea Manning, which was filmed over two years, including when she was released from prison after president Barack Obama commuted her sentence.

XY Chelsea “picks up on the momentous day in May when she leaves prison and follows her through her journey of discovery, while also examining her place in the conversation on national security and the fight of the transgender community for rights and visibility,” according to Showtime.

The Circus will return with Alex Wagner

Earlier this year, Showtime announced that The Circus will return for its third season April 15, and Alex Wagner will join the show as a full-time cast member.

Wagner appeared on the first season in 2016. She’s a CBS News anchor and correspondent, having previously been a host at MSNBC and a White House correspondent for Politics Daily.

Season one and two host and executive producer Mark Halperin was fired by Showtime after his history of sexual harassment at a previous employer was revealed by 12 women.

John Heilemann—Halperin’s former partner in The Circus, Bloomberg and MSNBC TV shows, and books—will also return. Mark McKinnon, who appeared on season one but only had a few guest appearances on season two, will also return full-time.

Update, Jan. 7: Showtime CEO and president David Nevins said “we were already in conversations” with Alex Wagner about joining the cast before he learned of Mark Halperin’s sexual harassment: “She was going to come on regardless,” Nevins said at the Television Critics Association winter press tour on Saturday.

Nevins said Halperin contacted him “a day or so before the story broke,” and said, “he’s an old friend, and so that was very difficult and to be blindsided like that. And once it became clear, I think we decided very quickly it was best that the show go on without him.”