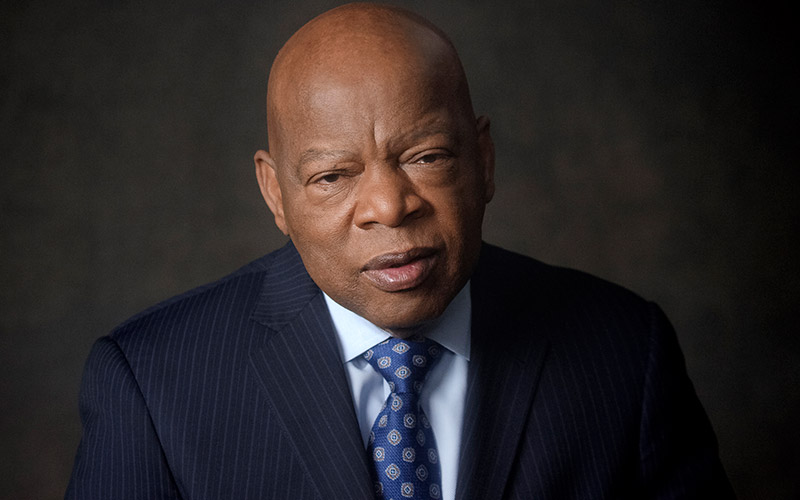 Today is Martin Luther King Jr. Day, and since it’s Jan. 15, the anniversary of King’s birth. When President Ronald Reagan signed the holiday into law in 1983—though it was observed for the first time in 1986, and not observed by all 50 states until the year 200—Reagan said:

“[King] symbolized what was right about America, what was noblest and best, what human beings have pursued since the beginning of history. He loved unconditionally. He was in constant pursuit of truth, and when he discovered it, he embraced it. His nonviolent campaigns brought about redemption, reconciliation, and justice. He taught us that only peaceful means can bring about peaceful ends, that our goal was to create the love community.”

Tonight, one of King’s closest friends, the civil rights leader and current congressman John Lewis, will be featured on the first-person reality series Oprah’s Master Class (OWN, Monday, Jan. 15, at 10).

Lewis spoke at the March on Washington in 1963, and is the only person who spoke that day who’s still living. The episode includes Lewis talking about how Dr. King was “like a big brother,” and recalling King’s sense of humor:

“And on occasion when we would be traveling in Alabama or someplace in Mississippi, you’d see a little hole-in-the-wall café or restaurant. He would say things like, ‘We should stop and get something to eat. If we get arrested and go to jail, we go on a full stomach.’ And he thought it was so funny.”

“Raoul Peck envisions the book James Baldwin never finished. The result is a radical, up-to-the-minute examination of race in America, using Baldwin’s original words, spoken by Samuel L. Jackson, and a flood of rich archival material. I Am Not Your Negro is a journey into black history that connects the past of the Civil Rights movement to the present of #BlackLivesMatter. It is a film that questions black representation in Hollywood and beyond. And, ultimately, by confronting the deeper connections between the lives and assassination of these three leaders, Baldwin and Peck have produced a work that challenges the very definition of what America stands for. “

Not only are these four new shows debuting, but I have in-depth coverage of them coming to you this week:

Two Discovery franchises air spin-offs: Gold Rush: White Water (Discovery, Jan. 19, Fridays at 10), which follows Dakota Fred and his son Dustin looking for gold in a river, and Street Outlaw: Memphis (Discovery, Jan. 15, Mondays at 10) follows a team of family and friends who race together.

Finally: Siesta Key returns for the rest of its first season (MTV, Jan. 15, Mondays at 10), and eight celebrities try to summit a mountain in Peru on Ultimate Expedition (YouTube Red, Jan. 17).

MTV is doing this in the name of Diem Brown, who died from ovarian cancer in 2014.

Starting Tuesday, items will be available for bid on eBay. MTV says they include “items such as game jerseys signed by past Champs & Stars including Johnny Bananas, Emily Schromm, CT, Wes Bergmann, Terrell Owens, Kim Glass, Justina Valentine, and Shawn Johnson, and will even include Diem’s own jersey from The Gauntlet.”