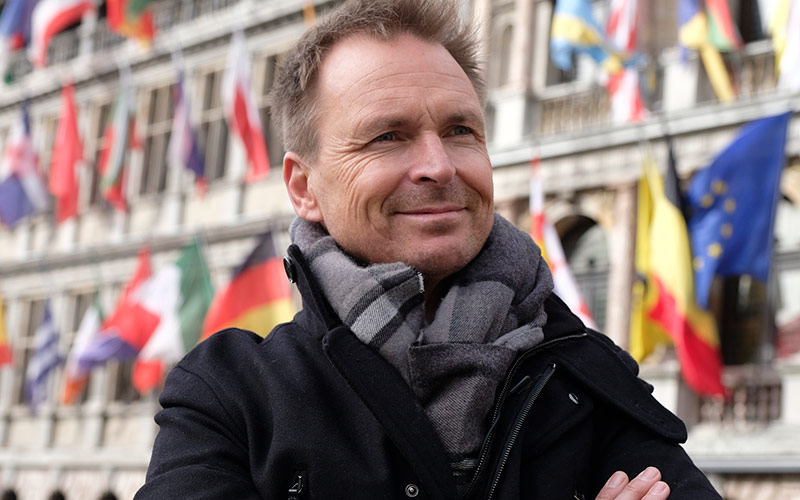 Phil Keoghan, host of the Amazing Race and new host of National Geographic's Explorer, in Belgium during season 30, episode 2 of The Amazing Race. (Photo by Timothy Kuratek/CBS)

The Amazing Race host Phil Keoghan is the new host of National Geographic’s Explorer, and will be hosting a 20-episode season of the iconic series.

The network cancelled Explorer in 2010, but brought it back as a monthly newsmagazine in 2015. Then it relaunched Explorer in 2016 as a show that was “mixing intrepid field pieces, roundtable discussions and in-depth interviews,” according to the network.

Now it’s being reinvented again, with Phil at the helm. Here’s how NatGeo describes it:

“The new season of Explorer will transport viewers to different parts of the world. The show follows Keoghan as he treks into far-flung regions to meet with National Geographic Explorers on the front lines of groundbreaking scientific, technological and historical discoveries. Trekking deep into the Amazon, high into the Himalayas and sitting barefoot in some of the world’s most sacred spaces, Keoghan plays host to Explorer’s signature documentary segments, curated to deepen our understanding of the world by exploring complex shifts, relationships and phenomena.”

Explorer is currently in production, and will air in the fall.

In a press release quote, Phil said, “I have been sharing stories in front of a camera for the past 30 years, and I am thrilled to partner with National Geographic again on such an iconic series that is rooted in fueling the adventurous spirit found in all of us. I look forward to taking viewers with me on adventures around the globe to learn how we shape the world through adventure, curiosity and understanding.”

NatGeo executive Tim Pastore said, “we’re confident that with Phil as host, he will be the catalyst for viewers to understand the way we fit into the world.”

How will this affect The Amazing Race, if at all?

The race films in just a few weeks, and Phil has worked on other projects before in the past, such as hosting Earth Live for NatGeo last summer and producing and filming a documentary, Le Ride, for which he recreated the 1928 Tour de France.