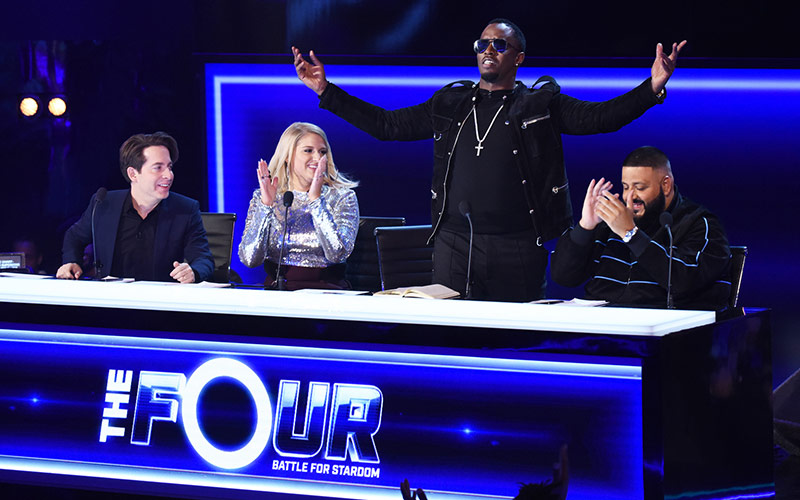 Maybe The Four: Battle for Stardom is a response to ABC’s impending broadcast of Fox’s former golden child, American Idol.

But The Four, which premieres tonight (Fox, 8 p.m.) surprised me and kept my interest for two hours.

The format is simple but different enough from usual music competitions that the premiere spends a lot of time explaining: The Four starts with four finalists, but they only perform a group number before the challenges start, so they’re relegated to the background at first.

The challenges play out as auditions: contestants perform for the judges, who give feedback one by one, just like a typical competition, and then vote whether or not to send the person through to challenge one of the four.

The contestants are somewhat hit or miss in episode one, and so are the judges, who take a while to warm up.

Charlie Walk is the one judge without name recognition, and he’s mugging for the camera and trying so hard to be early Simon Cowell that I was surprised he didn’t use a British accent.

The set is familiar with its blue glow, as is the sweetening of the audience’s reactions (enough phony, nonstop screaming and cheering, broadcast reality shows!).

But after watching tonight’s premiere, I found myself liking it more than not. There are times when it feels like a mediocre Idol knock-off.

And then there are the times when it just explodes with talent and energy.

Four reasons to watch The Four

1. More than pop. The Four isn’t just top-40 karaoke, and is more than pop: hip-hop, Latin, R&B. And   it is wonderful to hear different genres performed by people who really can perform.

2. Sudden-death challenges. If the judges like a contestant, the contestant chooses one of the four to face off against, with the winner keeping one of the four chairs and getting immunity from future challenges during the episode. It happens immediately, one song after the other. Then the audience votes—as a bonus, there’s no pandering to viewers about how this is their superstar, blah, blah, blah.

3. Brevity. Six two-hour episodes and it’s done, not 40+ hours over five months. The episodes also move quickly, and there is very little filler.

4. Diddy. There’s impressive on-camera talent here, and while some of these artists are settling into their reality TV roles, Diddy is as comfortably weird and passionate as ever. “I WANT GREATNESS!” he yells at no one in particular after rejecting  a contestant.

Later, he turns to one of the four and asks, “Ready to eat?” as if her challenger is food, a metaphor he doesn’t drop: “What kind of meal are you looking for?” And then the chanting starts: “Eat! Eat! Eat!”

That’s all so weird, but it energizes the battle, and both contestants deliver. That’s when where The Four feels like it clicks into its full potential.