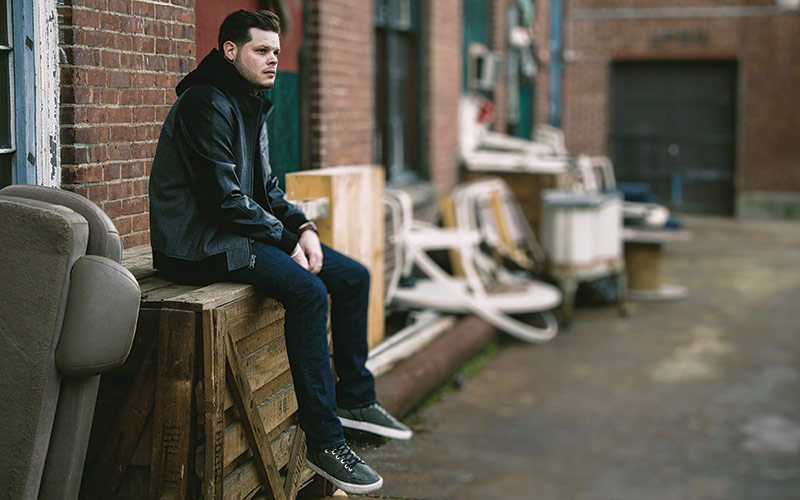 Derrick Levasseur, author of The Undercover Edge and winner of Big Brother. (Photo by Muggle Photography)

There is relatively little in Big Brother 16 winner Derrick Levasseur’s new book about Big Brother. Derrick is not really interested in talking about strategy or revealing the behind-the-scenes of Big Brother, even though he’s no longer held by CBS’ contract and “could write whatever I want,” he told me.

That’s because Derrick wants to change your life.

His book—which will be released Jan. 9—is definitely not the typical book by a reality TV star.

It’s friendly yet earnest, and surprisingly vulnerable. Derrick views it as a conversation with his (eventual) readers, gradually opening up until he’s sharing details about the time he shot a man while on duty, and its emotional aftermath: anger, alcohol, and eventually therapy. The book covers everything from his father leaving when he was a kid to the mistakes Derrick has made as a father.

Right now, Derrick is at another point of transition in his life: He left his work in law enforcement early last fall, a job he’s done since he was 19 (he’s 33 now), revealing in a video that he retired Oct. 7, having worked his last day Sept. 1.

He’s just filmed five of the six episodes for a new TV show that will be announced this week: an Investigation Discovery series on which he investigates cold cases, which came out of the success of his role in an ID show the O.J. Simpson murders.

And now he’s going on a month-long book tour to talk about his writing and advice. He’s so enthusiastic  about its contents that he stopped himself during our interview and said, “I want to apologize because I get long-winded, but that’s passionate how I am about this.”

Why Derrick decided to write a book

The book—The Undercover Edge: Find Your Hidden Strengths, Learn to Adapt, and Build the Confidence to Win Life’s Game—started with Derrick’s interaction with fans and friends, he told me.

But that wasn’t enough for a book. “I said to myself, I’m not going to just write a book because I can, because I don’t think that’s important. But if I feel have something that may actually help people, then maybe I will.”

It was on an airplane that Derrick realized “how I used those same techniques on Big Brother” could also help others. “What I’ve done is take the main components of undercover work, and I’ve adapted them to work in any situation, whether it’s at work or at home,” he said.

Also helping Derrick in these efforts—as he is “turning police strategies to corporate strategies”—is a masters in business management, plus his experience managing his career and brand.

Derrick said he shaped it into advice for readers—versus a straight memoir—because that’s what he’s been doing “my whole life,” he told me. “I’ve been a cop since I was 19 years old, and I became a cop to help people.”

And he’s helping people by sharing what works for him, in life and on Big Brother. “Nothing in the book is something that I don’t already personally use,” he said.

Derrick on trying to ‘break outside’ of the ‘reality TV stigma’

Derrick does mention Big Brother in the book, and among the examples from his life and time in law enforcement are a few examples from the show, such as how he knew Caleb was lying to him at one point in the game.

But Derrick didn’t want to discuss his strategy in detail because, he said, because fans already know what happened. “My whole game was on the live feeds,” he said.

And then there’s this: “To be honest with you, I’m trying to reach a larger audience.”

“What I’m really hoping to with this book is to, for the first time, break outside of that reality TV stigma and go to a broad audience where this book really reaches a large number of people,” Derrick said. “It’s going to be difficult. I don’t know how it’s going to turn out. But I’ve written the book so you don’t have to know what Big Brother is to know how to use these techniques, you don’t have to a fan of my Big Brother performance to benefit from what’s in this book. And I thought if I went to heavy on Big Brother I could lose people.”

And if readers want to use the techniques to benefit them on a competition reality show, whether it’s Big Brother or Survivor or something else, Derrick says it will be useful, because it’s the same “approach that I use in everyday situations, so will this help you if you want to be on reality TV.”

Derrick calls his time on Big Brother “proof of concept”: “If I can do it under those conditions,” he said, “you can do it.”

When he appeared on Big Brother last summer to host a competition, Derrick joked that he was the next twist, panicking Paul and making fun of how twist-laden and returnee-heavy the show has become. Derrick and I talked a little about that, and he said that while Big Brother may now be “more difficult because of twists, if you’re really that good and you use what you know about someone to build a real relationship as fast as you can, it is possible to still do it even in the current climate that Big Brother is.”

He observed the tendency of more recent players to be deceptive about themselves and their own lives, which can easily backfire. “I don’t want to mention names, but they would build a relationship with someone that was a complete lie,” he said.  “What it did during jury time was that fakeness was exposed.”

Compare that to his game, where people could be upset that he voted them out or did “what I had to do to win,” but “the one thing they couldn’t say was, He lied to me.“

The season 16 houseguests “mostly all still get along,” he said, because those relationships were real, built on “real substantive things that we could actually talk about outside of the game.”

Why Derrick is sharing stories for the first time

The confessional nature of the book “was a natural progression. It wasn’t intended,” Derrick said. “There were chapters that I wrote and after I read them, I felt like they were bullshit—they really didn’t really contribute to someone that could really benefit from them, and I would delete the chapter and start all over.”

Derrick said he actually cut out full chapters and dozens of pages to make sure “every page, every chapter to have something that could really help someone out in a positive way.”

For example, regarding his story about killing a man while on duty, Derrick said, “I break down that situation in a way that I’ve never told anyone before, ever.”

“A lot of people know that, but what they don’t know is the adversities that I went through during that time, and some of the trials and tribulations and mental struggles that I had to overcome to get to where I am today. There was a point where I really wanted to give up on doing anything because of what I had been through,” he said.

His experiences “make up who I am now, and they’re engrained in my brain and in my hard,” he said. “We only get one life, and to sit there and dwell on the things you can’t change is a waste.”

“My shooting taught me that. I spent every day asking myself, What have you done today to reach the goals you have for yourself, regardless of how unlikely they may seem. Andy, you’re a big reality TV guy, you know this business better than anyone, and it’s not very often reality stars go and write books. I wanted to go beyond that, and I’m sure there were people who out there who said there’s no way you could do that, but I wasn’t doing that for them. I was doing it for me, and I was doing it for the people that believe in me and who really want the advice that I have to offer based on how I played Big Brother.”

The goal: “I’m hoping that, not only can I give people techniques and skills that work in social situations and at work, but also if they get to a point where they’re struggling or they’re making mistakes or going through advertised, they don’t give up on whatever they’re trying to pursue.”

“I’ve been there, and I’ve been able to overcome those obstacles and accomplish great things. And I’m just a normal guy from Central Falls, Rhode Island,” Derrick said. “If I can can do it, anybody can.”

He added, “I can’t wait to hear the success stories.”