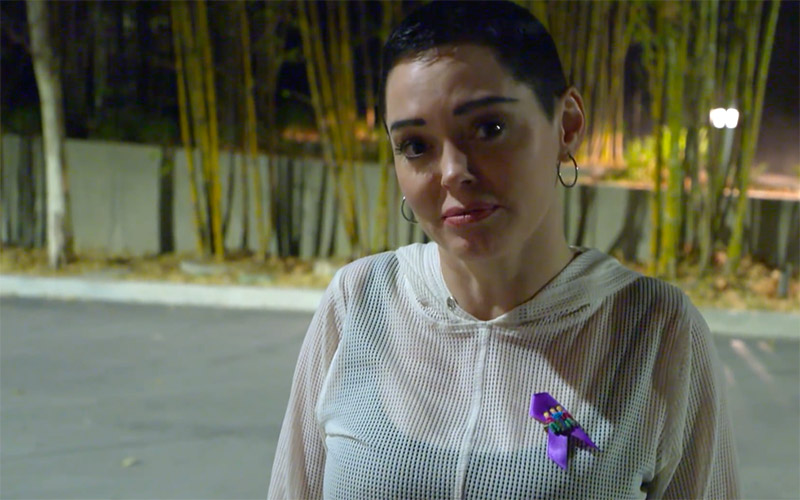 Rose McGowan in a clip from Citizen Rose on E!

“I can be many things all at once,” Rose McGowan says.

She’s talking to Asia Argento, an actor and one of the women who told their story of assault, harassment, and retribution by Harvey Weinstein in Ronan Farrow’s New Yorker story. Rose is rejecting Asia’s insistence that they’re not victims, but instead are “victorious.” Rose wants to acknowledge both “the part that I carry as a victim” and her victoriousness.

Citizen Rose (E!, 8 p.m.), and often “all at once”—showing her activism and her pain, her art and the actual conspiracy to silence her.

The show is “a limited series event in five parts,” of which the first part is most definitely a feature documentary, not two episodes of a series. I have no idea what will follow this or how it will follow, but this exceeded any expectations I had.

In less than 90 minutes (without commercials), Citizen Rose deftly spans two time periods: the past few months, as a cascade of men have been exposed as abusers, starting with Weinstein—whose name McGowan doesn’t speak, and so the documentary censors both his name and his image. But it also covers the past 20 years of McGowan’s life, since she was assaulted and then shamed.

The Hollywood machine is implicated, from the assistants to the journalists and web sites that ran stories and headlines. But this is less an expose and more of a deep dive into Rose McGowan’s experience then and now, though mostly now. The past is mostly there in her ever-present pain.

It’s an extraordinary work—managing to be both intimate and comprehensive, in both its content and its presentation. There are a few quiet, private moments, and many public ones, and sometimes the private moments that come before or after her public appearances.

They’re captured sometimes by film crews, sometimes by a single person filming, and sometimes by McGowan herself; the scene where she and Asia talk about their shared experience with The Monster, as McGowan calls Weinstein, they appear to be filmed by a phone propped up on a table.

Together they form a three-dimensional version of Rose and her work that is intense, emotional, always personal. It’s also recent—covering events from just a few weeks ago, including signing cards for her book, which is out today.

This raw and intimate portrait is airing on a network, E!, known for its manufactured reality television and elevation of superficial celebrity culture. But that’s not to say it’s not constructed. Rose McGowan’s art, words, tweets, and footage she’s shot over the past few years are interwoven into a combination of archival footage, current news footage, and new interviews.

They swirl together and overlap, and create an expressive, imaginative presentation.

The production company is Bunim-Murray, which is behind everything from The Real World to the Kardashians, and showrunner and executive producer Andrea Metz’s credits include several Kardashians shows, but also I Am Cait. It’s that Caitlyn Jenner series—its wonderful second season especially—that is the closest aesthetically and in terms of being both intimate and a show with a mission and a clear argument to make.

Citizen Rose goes much further in every direction. This is television that simultaneously shows us Rose with her guard up, resolute and fierce, and shows us why she is that very person.