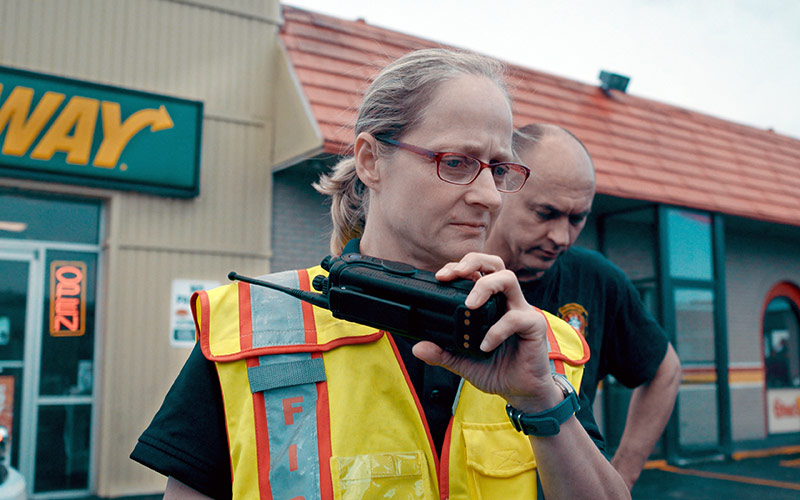 Jan Rader, one of the women profiled in the documentary Heroin(e) who are trying to stop opioid overdoses in Huntington, West Virginia. (Photo by Netflix)

The nominations for the 90th Academy Awards were announced this morning, and those include the 10 documentary films—five feature and five shorts—that were nominated for Oscars.

The difference in the two categories is simply about running time: shorts are less than 40 minutes long, and all other documentaries are considered features.

The awards will be presented March 4.

Here are the 10 nominees, descriptions from their web sites or press materials, and their trailers.

“[T]he little-known story of the only U.S. bank prosecuted in relation to the 2008 financial crisis.”

“89-year old Agnes Varda, one of the leading figures of the French New Wave, and acclaimed 33 year-old French photographer and muralist JR teamed up to co-direct this enchanting documentary/road movie.”

“An American filmmaker and cyclist unwittingly wades into a global scandal when a Russian scientist leaks shocking details of a vast doping conspiracy.”

Volunteers in Syria “are fighting for sanity in a city where war has become the norm.”

The “forces of family, grief and racial injustice converge in this powerful documentary exploring the murder of filmmaker Yance Ford’s brother”

Heaven is a Traffic Jam on the 405, Frank Stiefel (director)

“a portrait of a brilliant 56 year old artist who is represented by one of Los Angeles’ top galleries. Her body of raw, emotional work reveals a lifetime of extreme depression and anxiety.”

“This documentary follows three women — a fire chief, a judge and a street missionary — as they battle West Virginia’s devastating opioid epidemic.”

“What does it take to build a world-class French restaurant? What if the staff is almost entirely men and women just out of prison? What if most have never cooked or served before, and have barely two months to learn their trade?”

“the story of Breaion King, a 26 year-old African-American school teacher from Austin, Texas who is stopped for a routine traffic violation that escalates into a dramatic arrest”