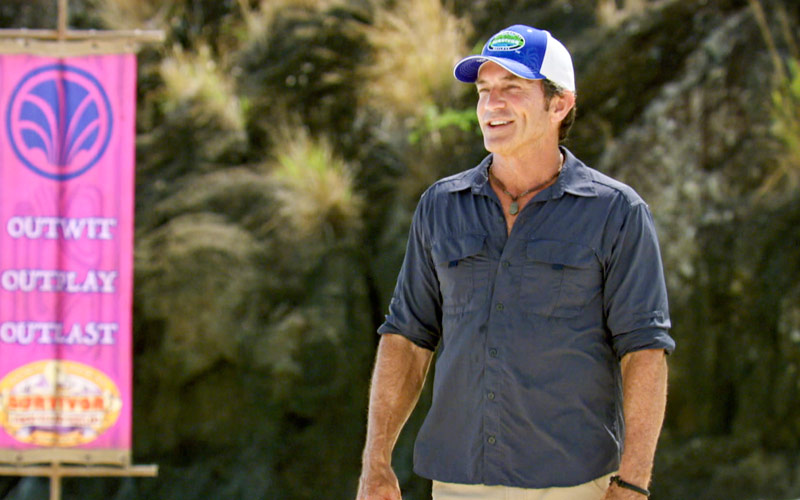 Jeff Probst on episode 12 of Survivor Heroes vs. Healers vs. Hustlers. (Image by CBS)

During the double episode of Survivor on Nov. 29, Jeff Probst made a surprise appearance during the commercials to encourage people to apply for the CBS show. Probst tweeted, “We want people who love the game to get the chance to play it and experience it.”

But he also offered some surprising advice on Twitter later that night.

His advice wasn’t to have a sister whose lifelong dream it is to be on Survivor and then tag along with her to a casting call and accidentally get cast for the show instead of her. That is, of course, what worked for Lauren Rimmer, as we learned during last week’s family visit.

Lauren went to an open casting call, but never intended to apply. In a pre-season interview with Josh Wigler, Lauren said that she got a number just to stand in line with her sister, and recorded a 1-minute video—and casting didn’t like it, but liked her enough to call her back:

“I talked my minute in front of the camera. Halloween night, they gave me a call and said I wasn’t very enthused in front of the camera. I told them I wasn’t really expecting to try out, because my sister lied to me and said she was the only one doing it. When we got there, waiting in line, you had to have a number. With about four thousand people standing behind me, I wasn’t about to leave her there. I got my number, too … and here I am.”

The Survivor casting page not only advertises open calls, but it says that “Super Fans,  First Timers (and everyone in between)” should “please apply NOW.”

Curiously, though, Probst actively discouraged people from merely attending open casting calls, saying that isn’t enough to prove that someone wants to be on the show.

Also during the Nov. 29 episode, Probst tweeted these instructions:

“if you want to apply send a video link to me here — or thru CBS. We need tape to see who you are and what you’re about… you don’t have to be a filmmaker. Just you. Who are you? What’s your story? Send me a link! We want great players who are compelling story tellers!”

Shortly after, someone tweeted at him to “check out” her “videos/open calls.”

Probst openly shamed her, retweeting her and adding: “if you want me to go find you from open calls you don’t want it enough. Tough but true. Just turn on your iphone and send me a clip. 39 days is tough.”

His admonition resulted in a lot of people—including the original tweeter—replying to Jeff with videos of themselves. In the days after, 22 of those people got replies from Probst saying he was sending their video to the show’s casting team.