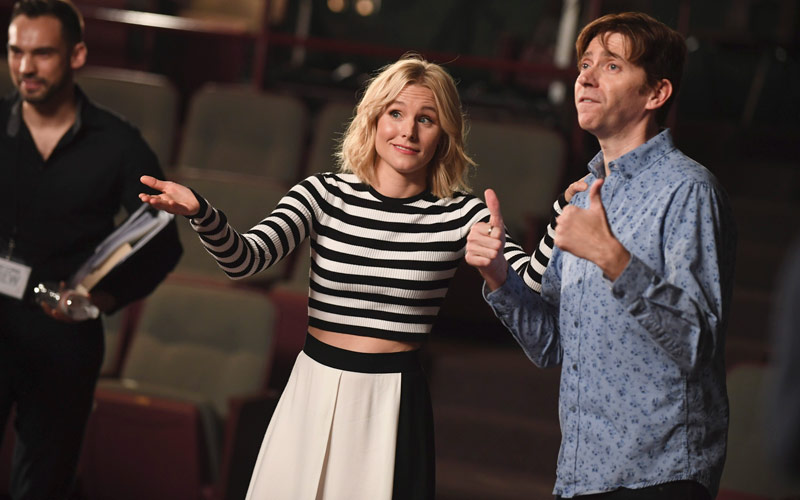 High school classmates reuniting after 20 years to once again put on a production of Into the Woods in their high school auditorium, mentored by Kristen Bell and a team of Broadway talent: Why isn’t this already a full series?

It was a special that aired last night on ABC called Encore, and turned out to be a charming, harmonious blend of the best parts of the early reality series High School Reunion, with elements of The Glee Project and High School Musical: Get in the Picture.

Kristen Bell, who stars in one of this year’s best new scripted series, The Good Place, is the show’s Tim Gunn, a host and mentor who offers advice and encouragement.

Encore is the kind of documentary-style reality TV I wish networks would do more of, and when they do it, maybe promote it a little better. (Dear ABC: I had no idea what this show was until I started watching it. I almost missed it because I thought it was maybe an infomercial for a play Kristen Bell was in.)

It upends expectations about what reality TV is—and it most definitely is reality television, because this production wouldn’t have happened without the show.

The television production is responsible for not just reuniting these classmates, but for construct of requiring them to produce an entire play in less than a week. That adds uncertainty, but also makes it a more manageable TV show.

Besides struggling with the stress of producing the show and memorizing their lines, the cast members are reconnecting with each other—and with their high school selves. Some notes felt too forced, like the edit was straining to stoke drama via an unrequited romance, but mostly the reunions produced touching and heartfelt moments and reflections.

It’s a perfect format, grounded with preexisting relationships and heightened by the tension of the production.

Encore was just one hour long, and I wanted more. Part of me wonders what this week-long process would be like if it had room to breathe over three episodes, or even six, with more time to go deeper and even just show more of the actual performance (only the last five minutes or so were of the actual play).

But I also suspect that brevity helped. Better to want more than to be bored.

I am definitely sure that I want Encore to continue and to become a full series—if not  in a regular, weekly timeslot, perhaps an annual event during the holidays, or maybe with episodes scattered throughout the year.

After I tweeted about this, Kristen Bell responded, “We want to make more!”

And in an interview with EW, she elaborated on why she hopes it will become a full series:

“In my mind this is not a one-hour special. This is something that brings everyone together in a way we need right now. We are currently in a world that is very divided. Everyone can look back at high school and be interested in spending one more day there. I would like to see this as a full series. I would like to see much more diversity in the casts that we’re able to explore — I would like to see different states, different socioeconomic backgrounds, and how that affected their situations. I would like to see the comedy that comes out of shows that were edited for high school. I read something on Twitter the other day about how someone had done Rent in high school, but the high school did not want to say ‘AIDS’ so they said ‘diabetes.’ That all the characters had diabetes — that’s hilarious! That’s interesting to watch. I would love to give people the opportunity to reunite with some of their high school companions on the stage and rediscover themselves. It’s a self-esteem-building exercise for all of us.”

That says it all. The world needs an encore for Encore.