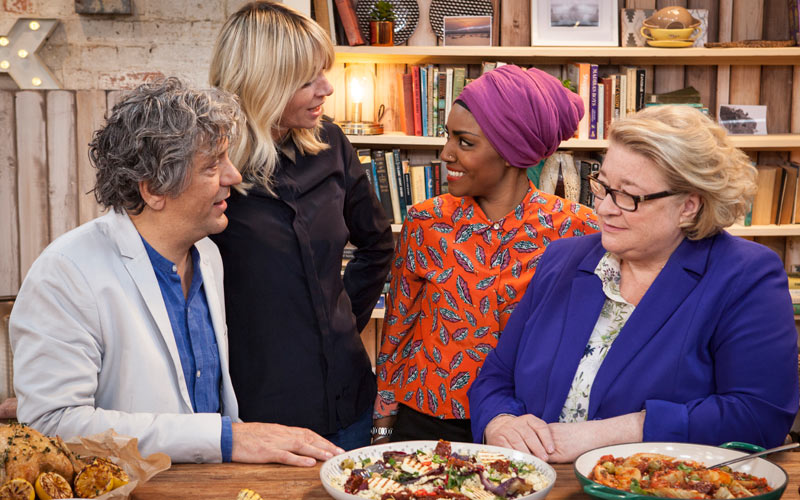 If you need a television show to invite you inside from the cold, and wrap you in a warm blanket of food and family, The Big Family Cooking Showdown is here for you, and it’s brought The Great British Baking Show‘s best flavors with it.

The cooking competition, which is on Netflix, aired earlier this fall as the BBC’s ostensible replacement for the departed Great British Baking Show. While there are similarities between the two shows—the establishing shots and cutaways to nature, the music so cheerful it could just dance itself into your living room—this isn’t just a savory version of GBBO.

The commonalities are mostly in the simplicity, the recognition that people cooking is enough to power a show. There isn’t a need to create a villain in the editing or crash a cymbal every time something goes wrong. There aren’t dramatic cliffhangers nor endless soundbites that over-explain everything we’re seeing. (Come on, American television network executives: learn from this, please!)

In each episode, two teams of three family members—siblings, parents, grandparents; boyfriends and girlfriends; spouses and in-laws—cook three times. First, they prepare a £10 dinner; then a main and dessert; and finally, an appetizer and main course for the “impress the neighbors” challenge.

The first and last take place in a charming barn not unlike a Pottery Barn with its wood floors and kitchen knick-knacks. The second takes place in the family’s actual home.

Yes, this is a cooking competition where the contestants invite the judges into their homes and serve them from their own kitchens. It’s wonderful. (I was hoping they’d all sit down and eat together, but perhaps that’d be too quaint for an actual competition; instead the family just watches the judges as they eat and critique.)

Because these are families and people who know each other, and they’re working together, there is more tension and conflict than in GBBO, but it’s “more” in the way that there are more chocolate chips in some cookies, and it’s about the same level of conflict the bakers have with their ovens.

All of this is presided over by two hosts, Zoë Ball and Nadiya Hussain, the winner of GBBO’s sixth season. They mingle with the families, ask questions, and observe. They’re not pouring out the puns, but are more like  friends who come over for dinner and make conversation while watching you cook. They can be alternately skeptical and supportive, both in person and in their narration.

The judges also mingle, asking questions and commenting. Giorgio Locatelli and Rosemary Shrager were, at first, harder for me to read and even to love—they seem more demanding and tougher.

They have honest, direct critiques, though it quickly became clear that those critiques are wrapped in understanding of what’s gone wrong. And any rough facade fades away once they taste something they love:  Giorgio looks up from his food, his gray curls dangling in front of his eyes, bright with joy; Rosemary radiates waves of exhilaration.

The winners of the first eight rounds go on to compete in semifinal rounds, and eventually three families face off. Though this is a bracketed competition, it feels less like a showdown than a dinner party. The competition is entirely friendly, and so is The Big Family Cooking Showdown: the kind of cooking show that pulls you in, an invitation it’s hard to refuse once you’ve started watching.