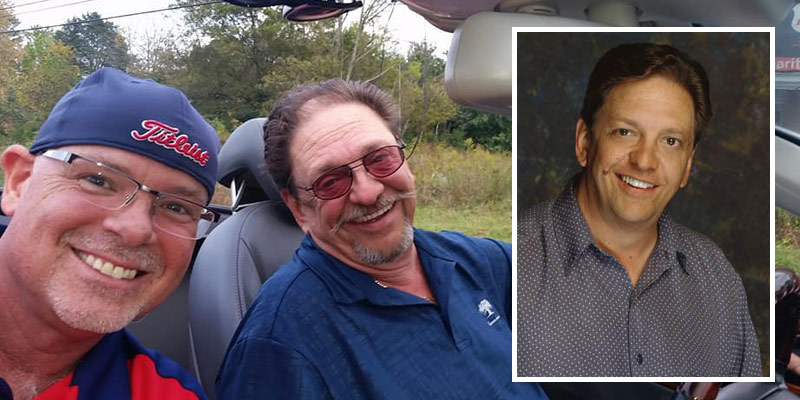 Kent Blackwelder, inset and right, with his fellow Big Brother 2 houseguest Bill "Bunky" Miller, in a photo posted to Facebook.

Big Brother 2 houseguest Kent Blackwelder died Saturday, according to people associated with the show. He was 62, and is the first person from CBS’ version of Big Brother to die.

A social media post by a family member says he died “unexpectedly” but did not give more details.

Big Brother casting director Robyn Kass confirmed his death on Twitter, saying she was “Sending love to the Blackwelder family.”

Fellow Big Brother houseguest Bill “Bunky” Miller—who became an ally and friend of Kent’s during BB2 despite Kent’s stated homophobia during the show, which aired in 2001—wrote on Facebook:

I visited Kent Blackwelder and his amazing family in 2003 at their home in Knoxville TN on my way to CA. Then this past October, after 14 years, I went back there to see Kent and his family. It was a great reunion. Lots of love and laughs. And I was so proud and honored to attend the San Francisco Gay Men’s Chorus’s Lavender Pen Tour concert in Knoxville with them. I never dreamed this would be the last time I would see Kent. My heart is broken. Kent and I were 2 completely different men who built a bridge. And Kent came a lot farther across that bridge than me. Thank you for your love, respect, and friendship, you Old Fart. Love, the Big Homo
#RIPBB2Kent #ILovedTheOldFart #SweetAndSourForever