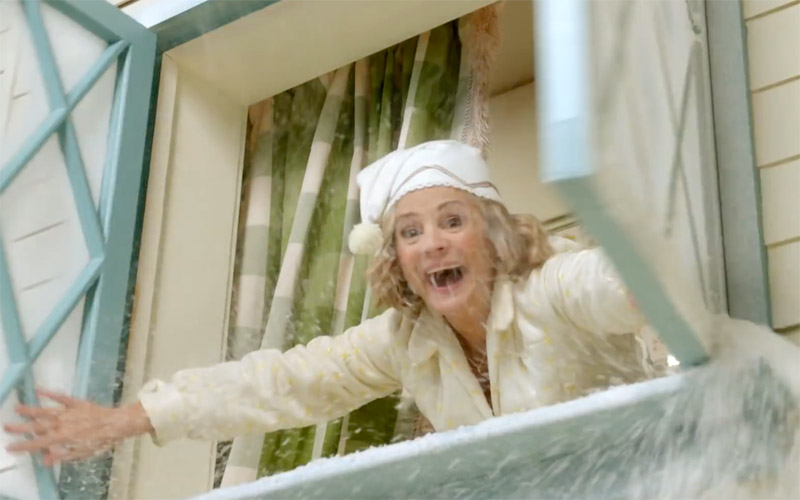 The double episodes of Survivor delivered surprises on Wednesday, and Project Runway‘s reunion last night gave the cast a chance to challenge Claire on her cheating-scandal backtracking, but what I most loved watching this week was Amy Sedaris’ holiday special, which debuted Tuesday.

At Home with Amy Sedaris (truTV, Tuesdays at 10:30 and on demand) is my favorite new series of the fall because it’s simple and wonderful: sly satire mixed with ludicrous insanity, and all wrapped in a package of Amy’s warm hospitality.

While the show is most definitely scripted and acted—there’s a parade of fantastic guest stars, from big names to wonderful character actors, plus Amy plays several characters—Amy was inspired by the kind of personality-driven unscripted shows from the past.

When she appeared at TCA this summer, Amy said her inspiration came from shows such as “Two Fat Ladies and The Galloping Gourmet, Frugal Gourmet, Julia Child.”

And there’s a probably lesser-known show that also inspired her:

“When I was younger, like five or six, seven, in North Carolina, there was a local show called At Home with Peggy Mann. And it was a woman who had a homemaking show, and it was really boring, and it was black and white, and she would sit in a chair, and the cord from her shirt to the cameraman would be attached, and she would talk about back sleeves and have really boring guests on her show. And I remember pointing to that show, the TV, with my mom, and saying, ‘Oh, I am going to grow up and do that show.'”

She has, and it is so much better.

The holiday special gets weird quickly, while other episodes have more of a slow burn before the craziness starts, but either way they have me laughing and smiling, laughing and crying, for 24 minutes. It’s the escape I need from the news and the week. Watch!