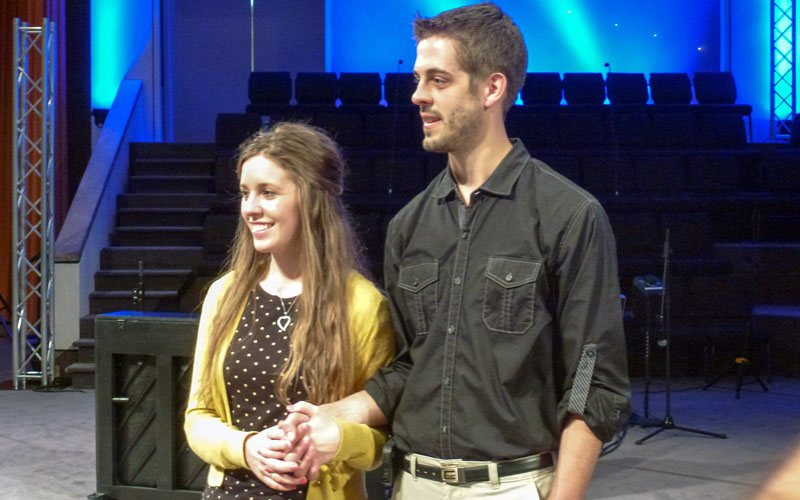 Jill and Derick Dillard on TLC. (Photo by TLC)

Three months ago, Counting On cast member Derick Dillard decided to tell his Twitter followers, which currently number more than 124,000, that writing “‘Transgender’ is a myth.” He referred to Jazz with male pronouns: “I want to be clear. I have nothing against him.” TLC has yet to act, unsurprisingly.”

Dillard is the husband of Jill Duggar, one of kids on 19 Kids and Counting who went on to star in Counting On, a show that exists because the previous show was cancelled after Josh Duggar admitted to molesting five girls when he was a teenager. His father defended it as being different than rape, and his mother argued her daughters were more victimized by the revelations than by Josh’s molestation.

It took TLC six weeks to cancel their show.

Of course, TLC didn’t really cancel it. It just created a new show with a slightly different focus, produced by the same production company. Why take a stand when you can continue to profit?

That could also explain why, in August, TLC did the least it could possibly do when an adult star of one of its shows went after a teenager who stars in another one of its shows.

Faced with an underage cast member saying she was being cyber-bullied by another one of its employees, TLC did nothing publicly. I write “nothing” even though VP of publicity Shannon Llanes told USA TODAY, “Derick Dillard’s personal statement does not represent the views of TLC.”

That’s a nothing statement, a garbage response from a garbage network run by human beings who have shown no care or concern from the human beings they profit from.

I am very angry and horrified that people could act so callously, if that previous sentence didn’t make it clear.

So guess what happened when, last Thursday, Derick Dillard again tweeted about Jazz, using inaccurate pronouns and writing, “nothing against him, just unfortunate what’s on tv these days.”

On Saturday night, always peak time for breaking news that will surely get attention, TLC tweeted a screenshot of what appears to be an iPhone note. It said this:

“We want to let our viewers know that Derick Dillard has not participated in Counting On for months and the network has no plans to feature him in the future. We want to reiterate that Derick’s personal statements do not reflect the views of the network. TLC is proud to share the story of Jazz Jennings and her family and will continue to do so.”

Note that this does not say Derick is fired, or that they’ve cut ties with him, even though that’s what headline writers at some entertainment news web sites are reporting.

Let’s recap what this statement actually says (and doesn’t say):

That is so cowardly, and so pathetic. How can a network and the people who run it respond to all of this with a shrug? How can it see such intolerance directed at its own employee by a person it employed and just look away?

Jazz, however, is a better person than I am, and tweeted this shortly after TLC posted its statement: