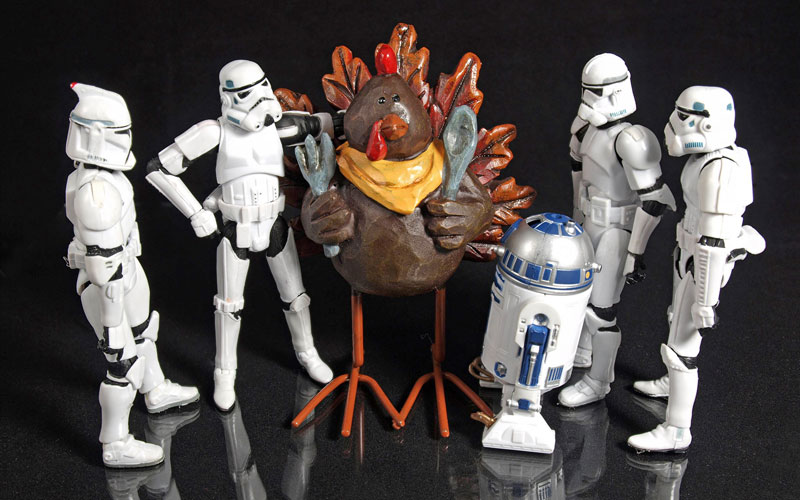 This is about as accurate a Thanksgiving origin story as the one we've been told. (Photo by Jim Bauer)

My idea of Thanksgiving, the one I learned in school and reinforced with construction paper Pilgrim hats and traced-hand turkeys, is a story about people coming together and bridging cultural divides, of a bountiful feast and joyous celebration, gratitude and joy.

Even though the story was told from the perspective of the Pilgrims, I was never told that they were actually a small group of unprepared extremists who were so bad at survival they robbed the graves of Native Americans for food and used their own dying people as actual, literal props, carrying them into the woods and propping them against trees with muskets to look like they were guards.

But those are the true stories of the Pilgrims. There was a feast shared by the Pilgrims and Wampanoag, but how it came to be, and what led up to it, is far more complicated than the cartoonish version that Americans learn.

That’s explored in The Pilgrims, a TV documentary that debuted in 2015 and is still online, free, thanks to PBS.

It explores everything from unprepared Pilgrims plundering graves for corn to why Plymoth Rock became our American origin story, even though Jamestown was settled 13 years earlier. (The people at Jamestown, by the way, resorted to cannibalism.)

The documentary is directed by Ric Burns, Ken Burns’ brother, who said in a press release,

“The real story of the Pilgrims—who they were, what drove them on, what happened to them in the new world, how they succeeded and how they failed and why we remember them as we do—is far more gripping, poignant, harrowing and strange—and far more revealing—than the Thanksgiving myth we think we know.”

The Pilgrims touches on why Thanksgiving day has become the National Day of Mourning for some Native Americans. And it’s worth at least remembering the true story of Thanksgiving as we eat and shop.

I was prompted to do research and found the documentary after listening to the radio earlier today. Some of this was discussed by the writer and journalist Simon Moya-Smith, who’s part of the Oglala Lakota Nation.

Also on during his Here and Now interview, he said that this Friday—aka Black Friday, our national shopping orgy—also happens to be Native American Heritage Day:

“Native American Heritage Day falls after a holiday that omits the murder and mutilation of Natives. And that’s even more difficult to stomach for me. … For indigenous people that day is known as ‘Un-Thanksgiving’ or ‘the National Day of Mourning.’ Because we mourn the millions of indigenous people who died as a result of aggressive settler colonialism.”

“We love the story of Thanksgiving because it’s about alliance and abundance and envisioning a future where Native Americans and colonial Americans can come together and celebrate the providences of a single God. But part of the reason that they were grateful was that they had been in such misery; that they had lost so many people on both sides. So, in some way, that day of thanksgiving is also coming out of mourning; it’s also coming out of grief. And this abundance, that is a relief from that loss. But we don’t think about the loss, we think about the abundance.”