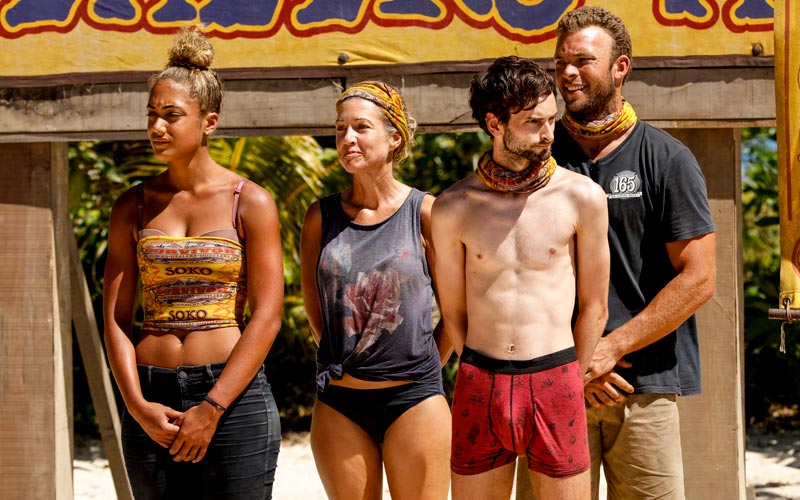 “This is why you play Survivor,” Joe said as he found his second idol. But a more apt title for the episode, and for the season, was what Ali said as she was voted out by her tribe: “You’re kidding me.” Because as the season approaches its merge, it delivered a frustrating episode that had a few flashes more excitement than other episodes this season, but was extraordinarily flat for a pre-merge episode.

We began with Ali upset about being left out of the vote and confronting Ryan. Ryan’s explanation: Ali was too close to voted-out Roark. Ali countered with an obvious fact, reminding Ryan she’d known Roark (wait, who?) for just four days, but was aligned solidly with Ryan for long before that: “I was in an alliance with you. I would have done whatever you wanted me to do, Ryan.”

Ryan was basically like: I don’t know you, either. Honest, maybe, but questionable game play. (Someone explain to me why everyone is in love with Ryan and his strategy, please?)

There’s something weird about the edit and/or Ryan’s perception, in that moment and elsewhere. He acted as if Ali was the nutty one, but it seemed like the opposite. What he says isn’t aligned with what we’re seeing. Later, for example, Ryan criticized JP’s lack of a social game—when that is literally all JP actually has are muscles and a social game, a dreadfully boring one at that.

Ryan and Chrissy voted out Ali instead of JP, who they know will be a post-merge challenge threat, but who is obviously not a strategic threat. So I understand the vote; strategically, it’s a smart move to eliminate someone who’s smart and annoyed with you, and keep someone who’s not.

What was frustrating was the edit’s focus, which tried to convince us that Ryan and Chrissy cared about playing with other strategic players, rather than blocks of wood disguised as contestants.

There was no attempt to show the audience why Ryan and Chrissy made this decision, which inflicts unnecessary wounds on their television characters. All viewers are left with is that they said one thing and did another and ¯\_(ツ)_/¯

Cole hurts himself, but not from passing out

On the red tribe, Cole was inflicting damage on his character by himself, treating Lauren horribly, with ugly condescension, and also saying, without irony, “I’m not getting enough food at all.” When someone says that on Survivor, there’s a casting problem.

Cole wasn’t lying, though, and actually passed out. Thankfully, he had a nurse practitioner and a urologist on call, so there was no Survivor medical team visit—at least not one that we saw.

Interspersed between this were two decent challenges: the reward challenge started on the beach and ended in the water, a nice chance that became dramatic, since waves were thrashing floating platforms around, making it even more difficult to hit a target with a giant slingshot.

The immunity challenge was a team version of an individual challenge we’ve seen before: stack things on a platform balanced by ropes that the player is holding. This time, each member of the team had a rope connected to the platform, and each person took turns walking up to the platform to stack a block.

That meant they all really had to work together, making this a perfect team challenge. And Yawa’s come-from-behind win was especially impressive because they devised a new strategy: making it possible for the block-stacker to let their individual rope go slack. That gave them incredible speed.

It was an intense final few moments of the challenge, even though I did not care which tribe won or lost.

And I think that’s what is weird about this season so far: I have no investment in anyone. The people getting the most attention are usually the most annoying, and just as someone like Ali emerges as a potentially interesting character with complicated relationships, she’s voted out.