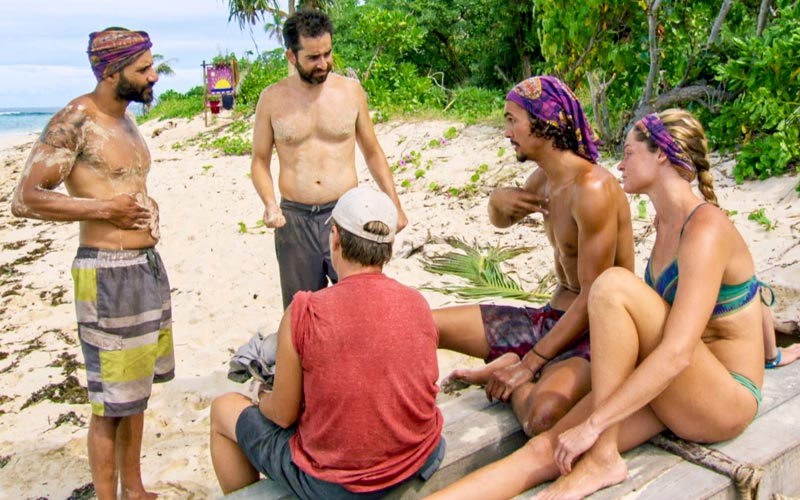 Going into these three episodes of Survivor—the pre-Thanksgiving episode and the two-hour episode last night, amusingly titled “Buy One, Get One Free”—I expected the merged tribe to just burn through the remaining three people who were in the minority alliance: Cole, Joe, and Mike. Conveniently, they also happened to be the most grating personalities remaining.

But after Cole was voted out to go hoard food at Ponderosa, this season of Survivor actually started.

Part of the dominant seven-person alliance decided to splinter, partnering with Joe and Mike—Joe and Mike!—and turning against JP, Chrissy, and Ryan.

And then that new group broke again.

“I feel like I’m finally playing Survivor,” Ashley said after the first #epicblindside, when JP was voted out. I felt like I was finally watching Survivor.

What’s perhaps particularly delightful about these turn of events is seeing some previously bad game play pay dividends. This split had origins in part in Ryan’s decision to tell multiple people about his idol in faux confidence, and betrayed Devon equals sadface Ryan.

The truly epic part, though, wasn’t the blindside, it was the lie embedded in it: Ben acted as if he was blindsided, too, and even voted with Chrissy and Ryan.

Ben got to play them and especially Joe and Mike—literally playing a role of a betrayed leader. “Cheers to my disloyal knights,” he said while enjoying a reward. It was the most truly fun a betrayal has been in a long time.

For a while during the second “Buy One, Get One Free” hour, it seemed like Ben, with an idol, was about to become the very thing he was pretending to be: a blindsided, betrayed alliance member.

Instead, that group—Ben, Devon, Ashley, Lauren—talked about dumping Ben but stuck with their plan to dump Joe. They didn’t need Joe, especially with Lauren’s extra vote. And thus they gifted us with his exit.

Honestly, though, whether it’d been Joe, Ben, or even Ryan, it still would have been a satisfying conclusion to this two-hour episode.

A late season turn for Survivor

I don’t want to underestimate how much I did not expect this season to turn like this. Blah gameplay and characters seemed like they were about to play out a typical early Survivor: a dominant post-merge alliance voting off the smaller alliance before turning on each other.

That’s rationale but boring, especially considering what I expect from Survivor.

When the first episode focused so much on Dr. Mike, I expected he’d be gone by its end. There was plenty of foreshadowing—Ryan saying “it’s making it a lot easier to get to that seven than it normally should be in a season of Survivor”—but I thought that was just misdirection.

At this point in the game, Chrissy, Ryan, and Mike are still outcasts, so it’d be difficult for them to turn the game against the others—especially with Lauren’s extra vote.

Though especially with Lauren’s extra vote, there’s now room for the four to turn against one of its own and still remain in control. The preview for next week suggests that could be Ben, who’s making a fake immunity necklace, though perhaps that’s not for himself.

Survivor 3.0 hasn’t shown up yet this season—there aren’t new coalitions forming every episode, nor Tribal Councils where things change in the moment—but there is a game, and now only recognizable people playing it.

Three episodes of Survivor remain, and let’s hope they resemble these past three episodes, which delivered some great Survivor.