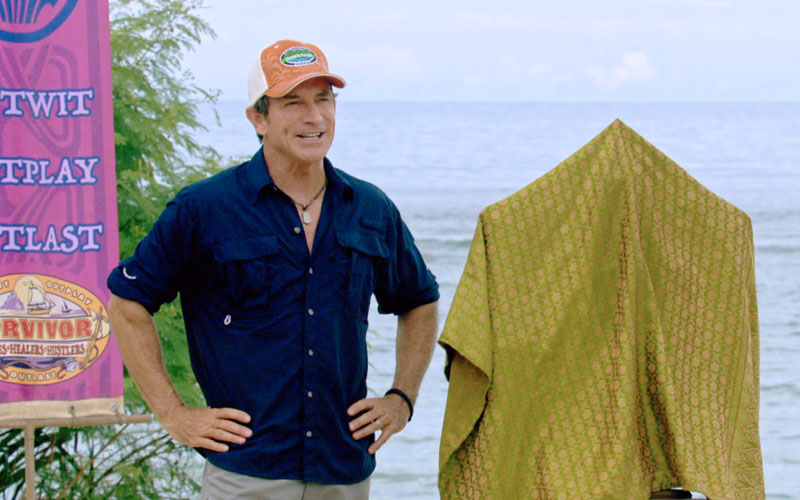 Jeff Probst next to another Survivor mystery. (Image by CBS)

I was voted into a family last week.

About an hour after our marriage license was signed, we gathered around a shiny dance floor surrounded by dinosaurs at a science museum, and my husband’s parents and brother surprised me with a reverse Tribal Council. They held up replicas of actual votes with my name on them, and gave me a custom-made buff with their tribe—er, family—name on it.

That was followed by a second surprise: a group of my close friends staging two brief competitions, aspects of our relationship turned into comic, themed challenges.

Survivor is far from the only show I like or watch regularly, but it has become an indelible symbol of my life’s work, because Survivor changed things for television and for me.

By demonstrating that real people could be more entertaining and as artfully produced as fictional shows, it created a wave of copycats and successors. (Hollywood’s risk aversion can occasionally have its benefits.)

Thus television became awash in the genre of TV that had captivated me since I was a kid, starting with The Real World but including its predecessors, from Jerry Springer to Double Dare.

That wave of reality shows produced outstanding television, and gave me far more than I could ever write about, report on, analyze, and enjoy. The explosive growth also led to copycats, lower-quality shows that are sometimes ethically challenged and toxic to our culture. But that’s to be expected; every genre and art form has its highs and lows.

Throughout those 17 years, though, Survivor has been a constant high. It’s been the show that has consistently held my attention and interest, and given me fuel to write, in these electronic pages and elsewhere, with about what I just saw.

Yes, Survivor has occasionally floundered a bit, and there are certainly seasons that some of us were less-impressed by than others, even if we disagree about what those are. (For example, I’m particularly fond of Gabon, though since that was the first time I visited the production, it’s hard to separate that experience from the episodes that followed months later.)

Some seasons start slow and take off; the reverse has also been true. But I cannot remember being as detached from and indifferent toward a season as I am with Survivor Heroes vs. Healers vs. Hustlers. Its episodes and character portrayals have been flat, more paint by numbers than grand storytelling. Its twists feel like attempts to start a car by pouring gasoline all over it and lighting a match.

Outside of my reactions to individual episodes, I’ve been trying to understand why this season just isn’t working. Why does it feel so different?

The one thing I come back to is my expectation: I expect Survivor to be great—no, excellent. I expect the cast to be dynamic and well-rounded, and for the editing to ignore the people who don’t work out as cast members.

I expect the narrative to lay groundwork for the conclusion, and to build arcs across episodes and the season. I expect the hundreds of people who work behind the scenes to construct a show of the highest quality, from hand-crafted props to well-chosen camera angles.

I expect all of this because it’s happened for 17 years and 34 seasons.

That’s an incredible accomplishment. During that time, Survivor has managed to evolve while not changing its core, which is even more of an achievement. It’s experimented, sometimes less successfully than others, but even those failed experiments have been fascinating to watch and discuss. When the game hasn’t been interesting, that fact itself has been interesting to discuss.

The CBS show hasn’t suddenly diminished in quality, but it feels like it’s experiencing what The Amazing Race did: a loss of air, and a drift downward, a helium balloon that is softening with time.

But this season doesn’t feel like it’s a balloon that’s straining to reach new heights. It is merely hovering, its string slack, not taught. Even for a deflating balloon, defying gravity is an accomplishment, even though it still feels disappointing.

Which brings me back to our wedding celebration. I’ve been resisting the idea that marriage changes people, which kept coming up with greater frequency as the wedding approached.

When more than one person said that our wedding would be the best day of our lives, I was relieved when my then-fiance had the same reaction I did: I hope not! That’s a depressing cultural script, the idea that a wedding ceremony is some kind of peak, and it’s all downhill from here.

What I expect, and even wrote into my vows, is change. Change and growth. Transformation. New twists and wrinkles, probably in my face.

Expecting other people to stay the same, or expecting a relationship to never change, is an invitation for disappointment. It’s as utterly irrational as expecting a human being to magically change into a new human being—to change all of their behaviors and habits—just because they’ve signed some paperwork and are now wearing a ring.

Still: I want to hold on to the things I love. I want the balloon to always be full and racing upward.

I struggle with perfectionism, which you may not have noticed amid all the typos here. That struggle is mostly internal; I hold myself to a high standard because I want to feel worthy and accepted, and the best way to do that is to be perfect and have no flaws.

Of course, I realize how self-defeating that is, and what an impossible standard it is. And as I’ve worked to stop expecting so much, of myself and others, I’ve found ways to channel that perfectionist energy—into the world around me, especially onto things I love, and especially to things that have demonstrated their ability to be perfect.

That includes, of course, television. Survivor has often seemed perfect, a finely crafted example of this art form at its best. Perhaps that’s why this season has been particularly boring. It’s a shock to the system after so many years.

Except, well, when I scanned those years of Survivor-watching, I quickly realized that they’re full of change, both on television and off.

I started writing about Survivor in a one-room Chicago apartment with only a cat by my side, a cat who’s no longer here. Now I watch with two cats and a life partner.

I watched almost 400 episodes with a friend who, last year, moved far away. We’re still friends, but we don’t talk about Survivor, and every Wednesday doesn’t end with dinner at a strip-mall Mexican restaurant and mid-commercial conversation about strategy.

Survivor itself has been in a constant state of evolution. Anyone playing Survivor who expects mere consistency and stability will find themselves on a quick path to torch-snuffing. (This season alone, for example, the final four are in for a big surprise.)

I need to be reminded of that, and to allow my relationship with the show to change. It’s okay if there’s a boring episode (or six). Perhaps I don’t need to write something every single episode, especially if I’m just grumpy about not having anything interesting to write about.

I’m not giving up on Survivor, but I do need to give up the expectation that every night, every episode is going to be a delightful, first-of-its-kind surprise.

That kind of expectation and demand from viewers could have the opposite effect: leading the production to desperately throw ludicrous twists and crazier people to trying desperately to create a big TV moment. That’s what Big Brother does, and that’s why it’s a pathetic crumb of a show next to Survivor.

I’d rather be bored with this season than again be shocked by someone outing another person, on a television show that chose to do the same thing in an attempt to maintain its cultural relevance. I’d rather not know a cast member’s name than be familiar with the names of people who verbally abusing others. I’d rather the show not push itself and its contestants so hard that people are hospitalized.

And expectation can only create misery, because it’s about hoping for something other than what’s actually there.

I don’t intend to stop caring about what happens on TV or the effects of its on our culture and each other,  but I do intend to drop the expectation, or at least try.

Watching Survivor, I can accept what is—and think about it, and talk about it, and challenge it—without comparing it to what I think it should have been, or demanding it stay like it was before.

That’s certainly what all the members of my newly merged tribe—friends, family—do for me.