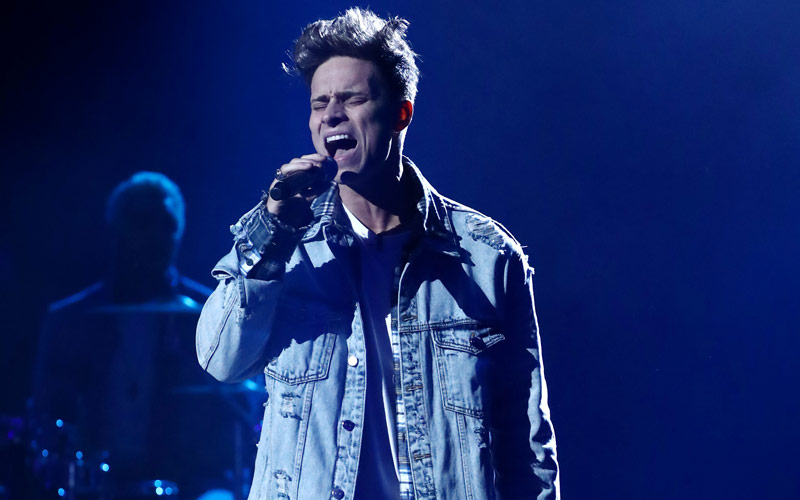 American audiences are used to seeing British and other international artists performing on Simon Cowell’s U.S. competition series America’s Got Talent, but the reverse hasn’t been true on his series The X Factor—until this season. Spencer Sutherland was the first American contestant to compete as a finalist on the show, and was also the first person voted off once the live shows began.

The X Factor UK also airs in the United States, on AXS TV—Sundays and Mondays at 9 p.m. ET, which is 24 hours after each UK broadcast, though Americans can’t vote in the competition.

When I interviewed him earlier today, Spencer told me he thought his early exit was because other contestants “had really big support systems,” and his fans in the U.S. couldn’t vote for him: “I thought America could vote but I found out the day of my first live show that they could not vote. I just don’t think I had a big support system. I’m just so happy to made it where I did.”

Despite being voted out, he’s had noticeable response from fans. “It’s been incredible, especially in the UK,” he said. “I had thousands and thousands of people that were super-pissed off at the X Factor, which made me feel good, because they were like, Why is he gone? So that made me feel good. The support here has been incredible—from social media, of course, but even just walking around, going to the gym or something.”

Spencer has just under 50,000 followers on YouTube, and was recruited to audition for The X Factor via an Instagram direct message. But he was quick to point out that “I did every single audition that everybody else. They just said, You should consider doing this. I paid for my own flight over—I flew over and literally auditioned just like everybody else. Everything,” he said.

Spencer told me he never auditioned for America’s Got Talent, The Voice, or other shows: “I never tried doing any of the American shows,” he said, adding that X Factor is different because “it’s such an artist-molding show.”

He said X Factor UK is “the show, for me, where all the stars come from: One Direction, James Arthur, Little Mix, all these huge stars. And I’ve always had a dream to sing in front of Simon.”

“My dream came true,” he said, though he was disappointed that Simon Cowell wasn’t there for the first live show; Cowell was hospitalized after falling at home, which he said was the result of low blood pressure.

Spencer said Cowell’s advice during the earlier rounds helped him, and he hopes to work again with Cowell in the future. “For some reason, I just have this connection with him and trust him. I learned so much from him and the other judges—especially Nicole and Louis, they helped me out a lot, just take it to the next level and find out who I am as a person and artist,” he said.

Spencer will be performing in London Monday, and heading back to the US in a week or two, though he’ll return to the UK for the December finale. He was signed to Ford Models three years ago, and has done some acting, though he said singing is his priority, “I think you should be open to everything.”

Being open to traveling overseas to compete in The X Factor has “just been the coolest experience ever,” Spencer told me.

“As much work as you think it is, it’s literally 10 times that. You’re there 14 hours a day. You’re just doing all kinds of filming and singing and shooting and choreography—for literally 14 hours a day,” he said. “But: it’s the best. You don’t it any other way, because if you really love music, you love doing it all day and all night. And it’s probably the most enjoyable thing that I’ve ever done.”

Clarification: This story and its headline were updated to clarify that Spencer is X Factor UK’s first American finalist, not contestant, as Americans have previously auditioned for the show.