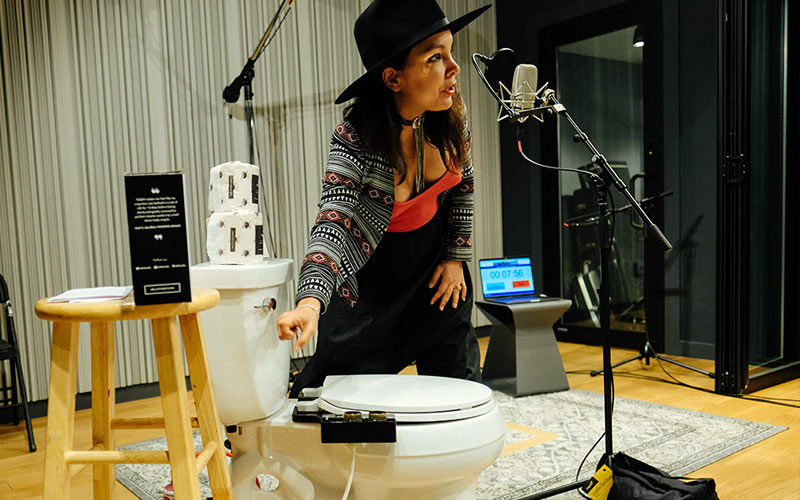 On The Pitch, Miki Agrawal pitches her bidet attachment Tushy. (Photo by The Pitch/Gimlet Media)

Season two of the terrific podcast The Pitch started last week with a riveting episode that ended with a founder accusing the show of creating conflict and “triggering” her with questions about what happened at her previous company.

Miki Agrawal was pitching Tushy, a toilet bidet attachment that apparently differs from all the other toilet bidet attachments because it has a different design and resembles an old TV tuner. She brought up her first company, Thinx, as evidence of her ability to succeed, a company she was no longer involved with but wouldn’t talk about, even though all of it was very public.

That made for a tense pitch and an even more rivetingly awkward follow-up phone call with Pitch host Josh Muccio. Listen:

Episode 15, which dropped yesterday, is just as riveting, though for an entirely different reason: A Navy veteran pitches his company, Shift, which is all about solving a major problem: getting members of the military back to work after they they complete their service.

Both of these season two episodes were preceded by an episode that introduced the three investors who now form a permanent panel, a change from season one—and a welcome one, because it was sometimes difficult to differentiate between members of the panel. Now, there are three returning investors and on guest investor each week.