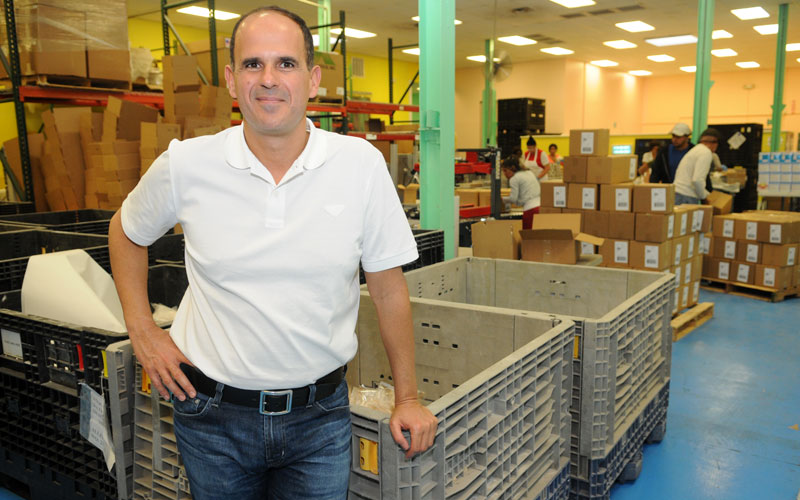 The central conceit of The Profit, which returns tonight on CNBC for its fifth season, is that Marcus Lemonis invests his own money in small businesses, so most episodes begin with him making an offer and writing a check to a company—checks that have ranged from $100,000 to more than $7 million.

But at least two businesses have publicly accused the show and Marcus of faking those checks for television. Are they real checks or stunt checks? Is the show staging that?

Meanwhile, the series’ spin-off, The Partner, concluded its short five-episode run more than seven months ago, and there’s been no word of its renewal. What happened to it?

I have answers to these questions directly from the show’s executive producer, Amber Mazzola.

What’s the future of CNBC’s The Partner?

When The Partner was first announced as a spin-off of The Profit, Marcus Lemonis told me that the plan was to do two Partner seasons a year, alternating with seasons of The Profit.

That’s because Marcus needed help to run the businesses he’d invested in, and also because he realized, as he told me, “I can’t continue to just make Profit episodes. They’re taxing on me emotionally, they’re taxing on me physically.”

Executive producer Amber Mazzola said that future seasons are currently “on hold only because he got this great [partner],” Julianna Reed. “Now thinks, quite honestly, he doesn’t know that he needs another partner.”

The show may still return sometime, but with a different format.

“We’re trying to decide if we morph the show into something else, because he doesn’t legit need another partner,” Mazzola said. “We can’t keep going season after season and he has like five or six or seven partners. He has to be realistic about how many partners he actually needs.”

When I asked if that might be something like the special non-investment episodes of The Profit—Marcus’ trip to Cuba, his look at marijuana businesses—Mazzola told me those are not produced by her company, Machete Productions.

Instead, they were produced by CNBC’s documentary division and just carry the show’s label.

When Marcus Lemonis writes a check on The Profit, we’re told it’s really his money. But some businesses have claimed that is staged for television.

The “prop” check is explicitly mentioned in a lawsuit (the founders of The Simple Greek are suing Marcus), and the business featured in season two, episode 11, Swanson’s Fish Market, wrote on their web site that “certain situations were manipulated, staged” and as evidence, mentioned the check Marcus writes specifically:

“When we sat down to do the deal they told us before hand that if he writes us a check, it was only for show purposes and we would have to hand it right back.”

Mazzola told me that his checks are real—”it’s really not a stunt check”—but revealed that the show typically does ask for the check back immediately.

What happened a lot of times the first season, literally moments after we negotiated: We would stop shooting at, let’s say, 3 o’clock in the afternoon. By 4 o’clock his checks were cashed. And sometimes, the businesses didn’t pan out and the deals went bad and Marcus lost a lot of money.”

The show adjusted by holding the check until lawyers do due diligence, which Mazzola said “happens during” production: “Literally, Marcus’ guys are waiting in the wings. When he negotiates, right after, they’re getting everything buttoned up.”

“We don’t tell them to rip up the check. They are just holding the check until the lawyers do their thing. It very much is the check unless the deal falls apart,” she added.

Why isn’t that included on the show?

“It’s really not great TV to see people doing 30 pages of deals and contracts,” Mazzola said. “I think the difference now is Marcus protects himself a bit more, and doesn’t have everyone cash it within the first five minutes of leaving.”

Still, that’s not a hard rule. Mazzola told me that, for a season-five episode of The Profit, the business immediately “cashed the check because Marcus said it was okay.”

Although the show has refined its production over the years, sometimes to the point of being formulaic, Mazzola said that in it’s “season five and we’re still sort of scrambling to follow him,” because the show is still very authentic.

“When he starts and he meets a business for the first time, we can prep him and say, Hey, this what we know about the business, but when he gets there … it’s true reality. It is really verite, we are really following him, and he is seeing stuff for the first time. He never really wants to scout it first or see a casting tape first, he wants to meet them as they audience sees them,” she said.