Brian Louden was doing math. He was translating quantities of hydrogen into the time it would take to produce it. His calculations produced an answer: 22 days.

More specifically: “22 straight days of farting,” he said. That’s how much gas he and Jon Lung had used in an experiment for the new Mythbusters, which returns tonight (Science, Wednesdays at 9), a year and a half after ending its run with its original team, Adam Savage and Jamie Hyneman.

“I realized,” Brian told me, that “I’m sitting down and doing the math to calculate just how many days of humans farting would you need to have so much hydrogen. I’m down in a certain rabbit hole I’ve never been down before. It’s wonderful.”

The show is back because, Science Channel general manager Marc Etkind told me, “it clearly is one of the most beloved science shows of all time, and clearly an important part of the network. There’s such a strong fanbase—I would love to figure out how to keep it going, bring it back, make it stronger.”

Using new technology, in both the experiments and the production, is one way to strengthen the show, he said.

For example, while the show will sometimes use typical crash-test dummies, there’s a new Buster: Boomer. Boomer is “a synthetic cadaver—the closest you can get to a human analogue,” Louden said. “Skin that reacts like skin, hollow and solid organs, every tendon. When you look inside this thing—I was a paramedic for years, I worked at a body farm—it’s not human, but it’s uncanny how human it is.”

But a more realistic dummy isn’t enough, of course.

Etkind said, “There’s such a long tradition, we wanted to make sure that the people that inherited the throne were worthy” and that would be “caretakers of the Mythbusters brand.” Hence Mythbusters: The Search, which was a one-time only series.

“These guys had to earn the right to be called Mythbusters,” Etkind said, “and I think they have.”

What myths the new Mythbusters will test 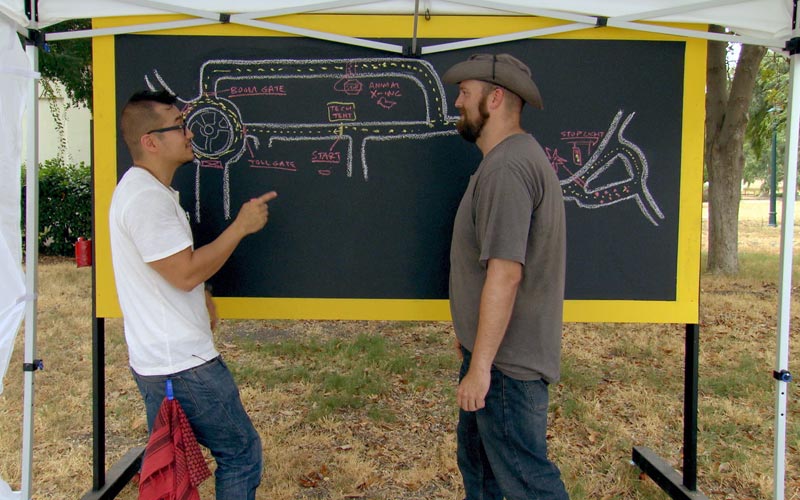 Jon Lung and Brian Louden may have proven capable of being Mythbusters, but the show is nothing without myths to test. And the previous version seemed to—well, run out after a while, and instead resorted to duplicating stunts from movies and doing fun but not-exactly-myth tests like that.

But the network and the Mythbusters are convinced there is plenty of material. Science GM Marc Etkind told me “the exciting thing is about Mythbusters is there are tens, hundreds, thousands of myths” to test. Louden echoed and added to that: “There’s a million myths.”

Louden set up the show as a kind of science fact-checker: “There are always new thoughts about what’s real, and we need to define whether or not what’s real, or real information.”

Jon Lung, who’s an engineer and product designer, said “Mythbusters has always appealed to a wider range of people because it’s tackled things from crazy explosions all the way down to does toast land butter-side down? So it goes from things you could only see on the big screen to things you could go in your kitchen and test right now.”

Louden said there’s a critical need for information about science, and “that need for Mythbusters and that communication and that experience will never die off, I don’t think, even a hundred years from now.”

As to the actual myths, Louden said, “We do touch on pop culture—I think there’s a difference to ask, Is this crazy thing that’s impossible actually impossible, or Is what Hollywood shows us real or not? And that’s what we like to look at. The moments where we do go into pop culture, we’re going, Hey, is that how it happens, or is there something totally different happening in real life?”

A recognizable but new Mythbusters

I interviewed the new Mythbusters in August at the Television Critics Association press tour, when they were about halfway through filming their first season, and then joined them on location when they were setting up a test to see how certain distractions affected drivers. (I’ll publish a behind-the-scenes story when that episode airs.)

The atmosphere was relaxed, and Lung and Louden were working alongside a small crew to set up the course that their test drivers would tackle after lunch. On camera, it’s just Brian and Jon; just like the start and end of the original series, there is no B-team.

“I think a lot of the appeal is watching Jamie and Adam be like, Well, that didn’t work—how are we going to fix this? I think that’s the most fun part: when you grow and learn with them,” Lung told me.

On location, they did not seem like two guys who had the weight of an entire series and a 13-year, almost 300-episode legacy on their shoulders. It was a casual, even relaxed production environment.

But when we talked a few days earlier, both were acutely aware of expectations—from fans, a group that includes themselves.

“I think it’s very important that we both started out as superfans, so we understand the importance and the legacy that is rested on all of our shoulders now,” Lung told me. “It’s in good hands; we actually care about it. It’s not like a job to us, it’s something we grew up with and is part of who we are now.”

“The Mythbusters we’re working on now will be very recognizable from the Mythbusters you’ve grown up to love and that people are used to, but it has a new spin and perspective,” he added. (Watch the first 12 minutes of episode one above to see what’s changed and what hasn’t.)

“Our goal is to create the proper science, the proper episode, and we get that done,” Louden said. “What you see on Mythbusters, and what sets us apart from going on to YouTube is the fact that we have this access, we have the opportunity, and we have the team behind it. What we do—it’s unbelievable to me.”