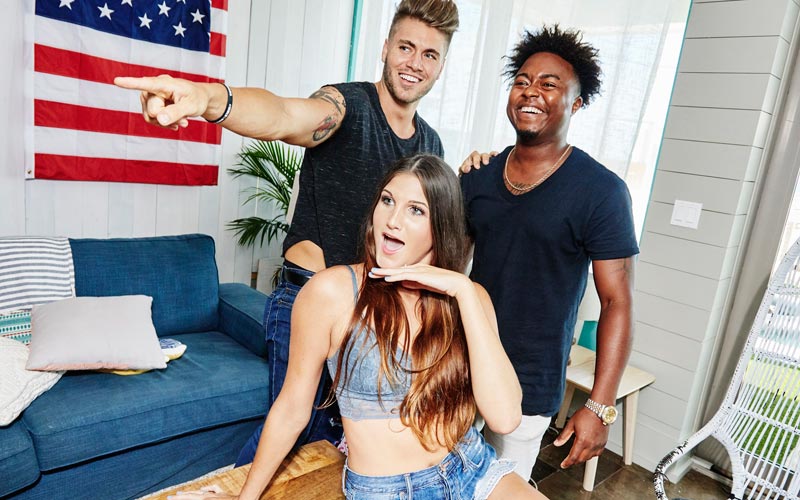 The title of MTV’s newest series is not Floribama Shore. It is MTV Floribama Shore, that’s how tightly MTV is tying itself and its identity to the series, which follows seven people spending the summer in Panama City Beach.

So if this show is MTV, what is MTV now?

It’s a woman so intoxicated that she drops her shorts and pees on a bed. Cast members performing for the cameras when they’re not repeating what producers are telling them to say. Incoherent editing and a budget production that feels too cheap even for this drunken garbage.

The surprise, however, is not the drunkenness; nor the immediate hookups and instant romance; nor the petty, drunken, violent fights; nor the grotesque sexism and objectification. The surprise is not a cast whose defenses of their behavior consist of sentences such as “I’m a grown-ass man.”

These are all so familiar they have surpassed cliche. (I do worry about those who grow up watching this toxicity and imagining that the condensed and edited version of this behavior is how people live their lives, but I’m sure people worried about me watching The Real World in the 1990s.)

Floribama Shore’s real surprise is how clumsy an attempt this is to turn the MTV usual into something resembling a television show.

The series is produced by SallyAnn Salsano’s 495 Productions, yet aesthetically this show feels like a no-budget web series copycat of Jersey Shore that was filmed with an iPhone 4.

It’s nothing compared to MTV’s usual visual quality, like in this summer’s cinemtaic Siesta Key or Catfish‘s what-fourth-wall aesthetic.

Here, the lighting, artificial and natural, washes out the cast, and everything is either too bright or too dark. Cameras jostle around and zoom in and out like the camera operator handed it to their kid to play with. Dialogue is inaudible and subtitled.

At best, it’s a cheap placeholder stand-in for the return of the original Jersey Shore cast, who will be back on MTV next year.

A curious premise buried under the predictable

In the two-hour premiere—two hours!—there’s a moment when Candace tries to teach Gus how to hold a fork correctly, instead of in his fist. There’s some life there, and flashes of a more interesting show.

But it’s over after a few seconds, and the editing surrounds these moments with so much drunken partying and pointless yammering that they’re barely there.

Curiously, there appears to be an attempt to lay some format atop this mess: Some of the cast members go on formal dates with each other like this is The Bachelor; they’ve also been given a job, like they were the cast of a Real World season at the start of Real World’s slow decline.

Neither of those go anywhere. Their job appears to involve being on the beach. The dates maybe fuel some jealousy, but there’s no identifiable narrative arc to follow see how one thing affects another.

In the first hour, with the cast gathered around the kitchen table, Nilsa tells everyone about a series of tragic events: she had a miscarriage, and while she was recovering, her husband was deployed. When he returned from his military service, he cheated on her. By 23, she was divorced.

And then we’re back to them getting drunk and peeing—this time in a trash can on the beach. (MTV Floribama Shore loves peeing.)

Including Nilsa’s story in the premiere episode was akin to throwing a postage stamp into a flurry of confetti: it has value, but who will notice or care enough to focus on it when there’s so much flying around?

Later, in the confessional, Nilsa tells the camera:

“I just thought maybe this was just going to be a crazy-ass summer where we just get drunk and party and go crazy, but I don’t think that’s what this is, I don’t think it’s what it’s going to be. I think, in a way, we’re all going through something and we’re all gonna, like, help each other through these dark places that we’re in and finally get a chance to break away and heal with each other.”

That would be an interesting series, a 20-something version of Starting Over, the 2003-2006 daytime series from Bunim-Murray in which women worked with life coaches and left the house in graduation ceremonies that acknowledged their growth and change.

That’s because MTV and MTV Floribama Shore are as interested in Nilsa’s version of the show as they are in accurately documenting a real place. (Spoiler alert: “Floribama Shore” is not a real place nor a term used prior to this show.)

Maybe it’s fear that the audience will bail if there’s too much seriousness and not enough partying, and there certainly is a lot of desperation all over the series. But MTV wildly clawing at its past success to try to save itself pulls up only shredded fragments.

The end result is nothing like Jersey Shore, nor anything that’s come before it—shows that invested in their cast members and offered something of substance to the audience.

Instead, MTV Floribama Shore is a reality show “where we just get drunk and party and go crazy” wins and “going through something” together loses.