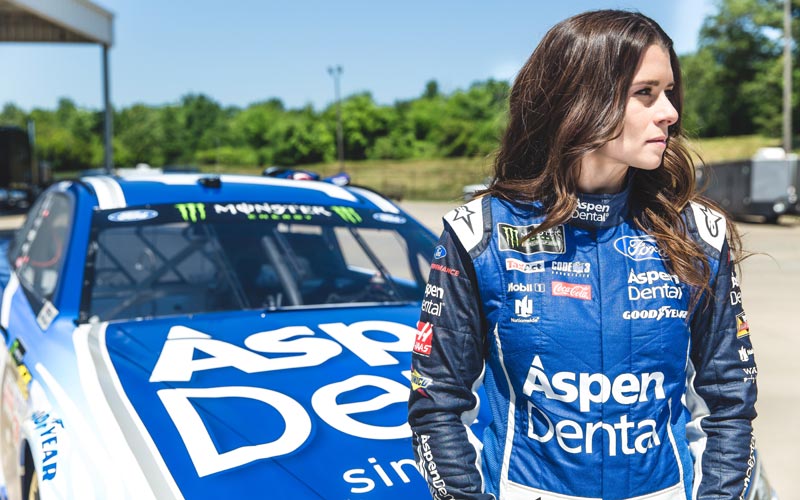 “I was never in the market for a documentary, because they all just sounded like a tell-all to me. But tell-all not by me, but by someone else. That’s why I agreed to do it: because Hannah was directing. I trust you.”

That’s Danica Patrick, and the person she turned to and said she trusted is Hannah Storm, the sports broadcaster and journalist. Storm directed the new 58-minute documentary Danica, which debuts tonight (Epix, 8 p.m.).

It’s about NASCAR driver Danica Patrick’s life on and off the racetrack, and I interviewed both filmmaker and subject this summer at the Television Critics Association press tour, when the film was about halfway through the editing process.

Danica’s trust was so full that she didn’t even expect to see the film in advance. “I said yes from the beginning because I trusted her. So, I don’t really—I’m okay to see the film when everyone else does.”

“You want me to see it before?”

“Okay, you come over, we’ll have a glass of wine.”

Filming Danica Patrick on and off the race track

Cameras followed Danica Patrick followed on the racetrack, at her home, and elsewhere starting January 2017 through May, though Hannah Storm told me “we tried to be really, really thoughtful about the access without just parking at her house and camping out with her. We can’t do that with her schedule.”

“We tried to make sure that every visit was…,” Danica said, and Hannah Storm finished the sentence: “meaningful.” She also called it “an extremely efficient filming process. She didn’t feel like we were in her way living with her, but she’s so committed, that when we were there she went overboard to make it work.”

As their finishing-each-others-sentences banter demonstrates, the filmmaker and her subject—or the subject and her filmmaker—were on the same page about everything, including the film’s focus.

“She’s not ever putting on a show,” Storm said. Danica confirmed that she would not do that: “I’m actually very much about authenticity,” and pointed out that she resisted any attempt to change what was real: “Can you move your dog? But the dog is always there!”

Judging by one person’s reaction to the trailer, Storm and Patrick have succeeded in authentically capturing Patrick’s life.

“When my agent saw the trailer, he was like, Danica, I thought it was going to be a little softer. And I’m like, But what do you expect? It’s impossible to surprise the driven, agressive part of me, because that is most of me. But it’s the other part that people don’t see,” she said. “I hope they come away inspired, but I feel like you can’t be inspired if you feel like it’s unattainable. So I hope that by seeing other parts of me that you don’t really ever see, you see that I’m no different than you.”