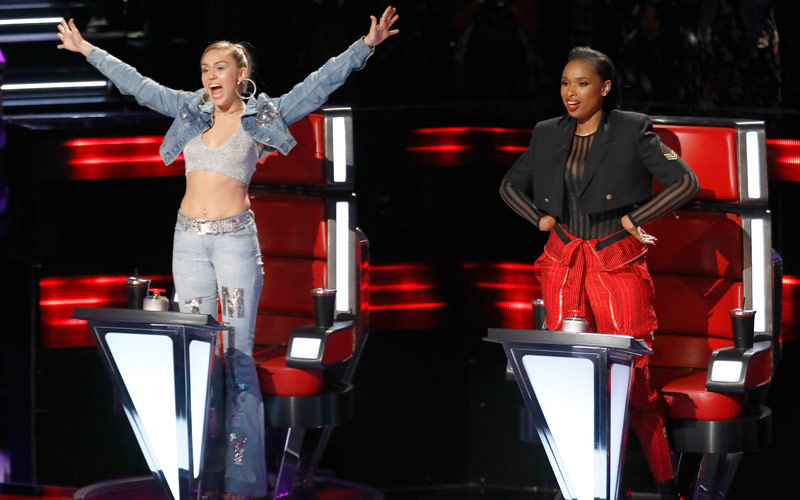 Miley Cyrus and Jennifer Hudson during the blind auditions of The Voice season 13. (Photo by Trae Patton/NBC)

The Voice and the upcoming reboot of American Idol are the reality TV shows that have the most-expensive 30-second ads. They’re followed by The Bachelor and Survivor.

Variety’s report on 2016-2017 ad prices shows that, of the 25 most-expensive shows on broadcast television, only four are reality TV shows—and they’re actually two shows that each air twice in a week, and one of those shows hasn’t even debuted: The Voice (10th and 11th most-expensive) and American Idol (16th and 21st most expensive).

Idol’s high prices represents confidence on the part of ABC that the show will draw viewers, which of course may not happen.

Interestingly, several unscripted shows that have yet to debut—including Ellen’s Game of Games; Showtime at the Apollo; and Amy Poehler and Nick Offerman’s The Handmade Project—are more expensive than well-established shows, such as Shark Tank.

Variety has a disclaimer that “[t]he cost of a TV ad can vary according to many factors, including the relationship between an advertiser and a network, and the amount an advertiser spends overall with a particular outlet,” and these “numbers are based on deals made during TV’s ‘upfront’ market, when advertisers buy commercial inventory in advance.”

That means ads bought during the season have different prices, and can be more expensive.

Variety lists all shows by their timeslot, which may be the best direct comparison, since different nights and timeslots have different values.

For my list, I’ve filtered out and ranked all of the broadcast reality shows, to see which are the most expensive and which are the least expensive overall. I’ve italicized shows that are airing midseason or do not yet have timeslots.

Here are the costs of a 30-second ad during these shows: