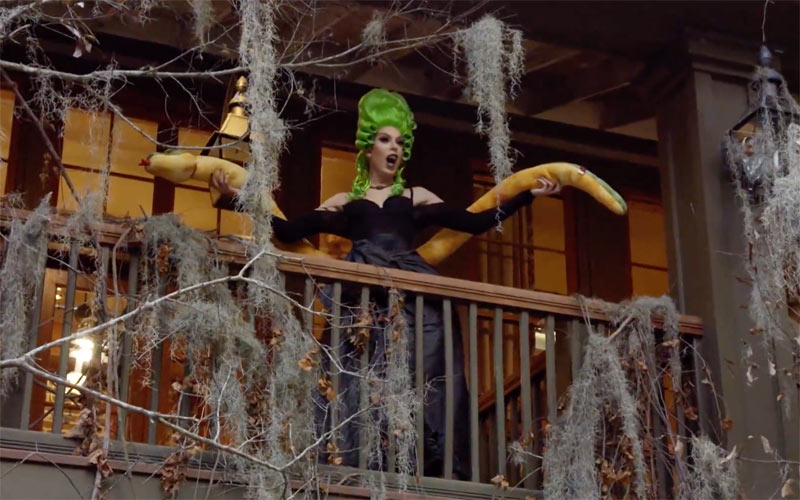 “We’ll figure this shit out, but I want a cocktail first,” says Tiffany “New York” Pollard during the first episode of Scared Famous (VH1, Mondays at 9). That is a wise plan. A cocktail will very much assist, or at least heighten, the joys of this fatuous show.

The entertainment here is entirely in the reactions of the contestants, all of whom are VH1 reality show stars, including four people from the Love & Hip Hop franchise; two Top Models, and one Drag Race queen.

They are competing for charity, though in the grand tradition of cheap reality television productions, the $100,000 is not guaranteed, but must be earned through challenges.

Beyond the possibility of charities getting shafted, everything is comedy.

From the random set design, which includes a stuffed beaver, to Redman’s hosting, which is less like hosting and more like having to interrupt your Stranger Things marathon to go into the next room to tell 10 reality stars to be quiet. (Perhaps that explains why so much of his hosting is accomplished via ADR.)

The “an eerie estate in Savannah, Georgia” where the celebrities are living is actually about an hour’s drive south of Savannah—and it’s the exact same location where John Cena’s American Grit filmed its second season last fall.

The house is also a brand-new, beautiful rental that has been given a hilarious coating of sticks and Spanish moss, and also a backstory about twins who disappeared in the woods, but returned a year later, probably to use the house’s new appliances.

The details of the “hauntings” at the “estate” are delivered via a scrapbook full of stock photos, and when New York is learning about its contents, she says, “There’s very real informational shit happening in that book.”

If only the production had time to assemble informational shit for the actual competition—which doesn’t really even begin in episode one—or even the first challenge.

That challenge is neither scary nor coherent, and contributes to the way the first hour drags—and another reason it drags is because its Drag Race contestant shows up long after everyone else for no apparent reason. (I assume the production was just so invested in the care and attention given to everything else here that no one had time to pick up Alaska at the airport.)

The production has rigged up some scares. The trailer above offers a lot of promise—and by that, I’m referring to what seems like costumed PAs chasing reality show cast members in the dark. I’ll show up to watch that any day.

In episode one, though, all the cast gets is—mild rental home faux haunting alert—a cabinet door that opens and is so terrifying that everyone who sees flees. Well, everyone except the camera operators filming it, who don’t seem to move from their vantage point right next to the haunted cabinet. (If I see or hear something odd in my house, I usually glance at the camera operator first to help me gauge whether or not I should be fleeing.)

I am honestly not sure if the producers of Scared Famous are trying to scare us or are winking at us in the way of a child who doesn’t know how to wink and thus squishes their entire face together.

I was too busy wiping away tears to jump when clumsy images of people were superimposed over windows or mirrors in post-production, which I think were supposed to be jump scares. (The cast members don’t react because it’s difficult to react to what will happen in an edit bay long after you’ve cashed your per diem.)

If anything, I wanted Scared Famous to go further—more camp, more ridiculousness. Pile it on and on and on.

But if all this sounds like I’m poo-pooing Scared Famous, well yes, but I’ll keep watching because the cast compensates. I was fully invested just from the way they introduced themselves:

Sky later says, “If you can’t see my heart that shit’s just like palpitating through this beautiful-ass shirt, it’s just these beautiful titties are just like cushion for them.”

That’s just how scary this shit is: very funny.