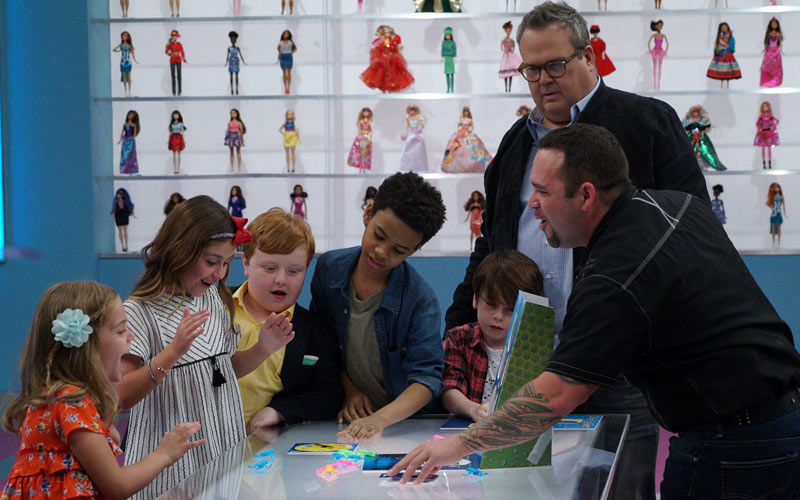 As much as I enjoy Shark Tank and shows with kids, I was not a fan of The Toy Box, ABC’s collaboration with Mattel that exists to produce a toy to be sold at the now-bankrupt Toys ‘R’ Us.

My primary complaint was the show completely lacked the raw and authentic reactions that other shows with young casts have in abundance. It felt stilted and forced.

For season two of The Toy Box (ABC, Sundays at 7), the format has changed, and now there’s an entire hour of kids judging toys instead of just half an episode. The adult experts have been eliminated entirely, and there’s a bigger, new panel of kid judges.

This is what I expected when I first heard of the show: kids testing toys and judging them.

After hearing a pitch and playing with a toy, the kids have a lively discussion about the merits of each toy they’ve sent to the final round. Then—with the inventors present—the kids vote, giving their reasons for saying yes or no. Three yes votes sends a toy to the final round, where the kids vote again. Majority wins—and if there’s a tie, a randomly selected kid judge gets to choose the winner.

The new panel is more diverse in every way, from age to experience, and feels less performative. They’re just reacting rather than mugging for the camera. Speaking of Noah, who dominated the panel last season—well, there’s less Noah even when he’s in an episode, and he’s not in every episode.

These kid judges don’t fake their reactions, and they’re often unimpressed. They surprise each other, and are frequently frustrated with each others’ decisions and reactions.

They’re brutally honest, and that is wonderful.

Whether they’re calling out unoriginal ideas, poorly constructed toys, or boring games, it’s useful feedback. Sometimes they’re so unimpressed they just refuse to play with the toy. Occasionally, the kids judge beyond their own reactions, thinking about how other kids might enjoy it, even if they did not.

Of course, when they’re thrilled with a toy, they are really thrilled, and get passionate about its success, and can’t hide their disappointment (if the toy doesn’t get enough votes) or elation (if it succeeds).

All the while, Eric Stonestreet is still having a blast, whether he’s playing with a toy alongside the judges or gently mocking the toy creators, the kids, or himself. His hosting is effortless and continues to be one of the best parts of the show.

The Toy Box doesn’t approach the high bar set by Shark Tank or Project Runway Junior, the best in class of their respective subgenres. But it has improved far beyond its first season attempt to combine kids and product pitches.